"Peace kick" of the Pope without Messi

Due to an injury, soccer superstar Lionel Messi cannot take part in the “Match for Peace” initiated by Pope Francis on Monday evening in Rome. Messi sustained an adductor injury.

The Match for Peace 2014 will kick off on September 1st at 8.45 p.m. in the Stadio Olimpico in Rome. Two selections with some of the world's best footballers from the present and the past compete against each other.

The new coach of the Argentine national team, Gerardo "Tata" Martino, and Arsenal manager Arsene Wenger have the task of forming two teams from more than 50 players. Argentina international Lionel Messi is out with an adductor injury.

Discussions with the cathedral priest and Prohaska

Before the match, during the break and also after the match, there are rounds of talks with cathedral priest Toni Faber, Muhammed Akagündüz and Herbert Prohaska on the subject of "Faith & Football". 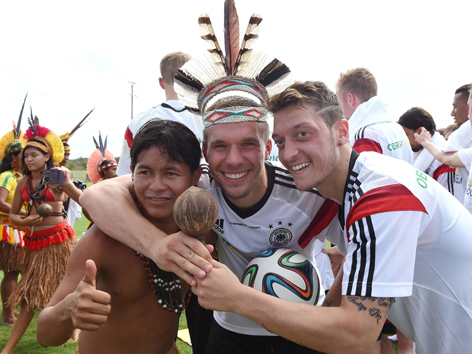 Reception with the Pope

Before the interreligious "Game for Peace", Pope Francis received the protagonists around Italy's national soccer player Gianluigi Buffon and the Argentinian Diego Maradona. "Say no to any discrimination with this party today," demanded the pontiff.

“Sport is a joy of life and a celebration, you footballers are the witnesses.” Numerous international stars such as Samuel Eto’o, Luca Toni, Carlos Valderrama and Ronaldinho were to take part in the charitable meeting in the Olympic Stadium in Rome on Monday evening. The injured Lionel Messi and Andrea Pirlo should at least be present.

"The religions are called to be a bond of peace, never of hatred," emphasized Francis, who initiated the game together with Inter Milan's Vice-President Javier Zanetti. "My wish is to see coaches and players from different religions together." Former footballers such as Maradona, Milan coach Filippo Inzaghi and Roberto Baggio also take part in the game.

Celebrities on the sidelines

The new Argentine national coach Gerardo Martino and Arsene Wenger, coach of Arsenal FC, will stand on the sidelines. All proceeds from the event will go to the “An Alternative for Life” project, which aims to provide better medical care and education for children and young people in Buenos Aires.

The friendly game should be a step towards world peace, said Zanetti, the long-time captain of Inter Milan, on Monday in Rome. The players represented different religions and cultures that were united in sport. All proceeds from the event will go to the “An Alternative for Life” project, which aims to provide better medical care and education for children and young people in Buenos Aires.

Lots of friends among the 50 names

The most important thing is the message

The match is supported by the Scholas organization, which is sponsored by Francis and campaigns for a “culture of encounter” in many areas, as well as the P.U.P.I. It was founded by Zanetti and his wife and is committed to promoting children and young people in Argentina.

It will be a great pleasure to see so many world-class footballers play together, said Zanetti, the current vice-president of Inter Milan. "But the most important thing is not the game, but the message that our Pope wants to give us with it."