Is advertising really about storytelling?

Content is king - no success without content. But content is a purely technical term - soulless, bloodless. The storytelling is missing. Text alone does not touch or move anyone. Stories, on the other hand, do. Storytelling is the oldest form of exchanging experiences, emotions and information. We tell each other what we have experienced, what challenges we faced, how we solved them. It's all storytelling. But telling stories, by word, picture or film, that inspire so much that they are immediately passed on and shared - that is a small art. How you can learn the art of storytelling ... 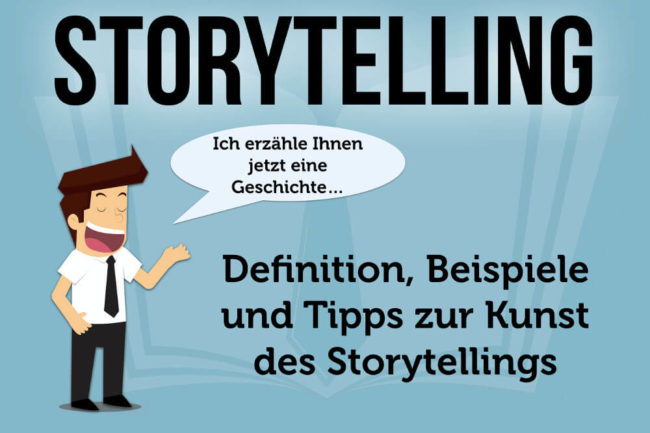 Definition: what is storytelling?

Since the beginning of time, people have told each other stories. In these stories ...

Storytelling is the art of telling a really good storythat captivates the listener and recipient, arouses emotions and leaves a lasting impression. Various linguistic means are used to achieve the greatest effect.

Advantages and benefits of storytelling

Various studies, for example from brain research, show that information is particularly well and readily absorbed when several senses are involved. Not only hearing or seeing, but also the heart and thus the emotional level. A pictorial language, a lively narrator, many impressive emotions - all of this helps us to remember what we have heard for a long time. And usually tell others about it.

Storytelling is a method used in marketing and advertising. But other areas also benefit from good storytelling: It helps the seller and provider to get customers excited about his product; the boss to motivate his team and the applicant to convince the recruiter. The ability to tell a good story is crucial in communication.

The content - that is, the content that is often invoked - can vary greatly. Good narrative stories in storytelling almost always follow the same rules, a typical dramaturgy. The reader, listener or viewer, should remain attentive and active. In this way, storytelling ensures that the recipient sticks to the narrator's lips.

This tension is essential and is built up continuously from the first moment - right through to the end. The structure of a functioning story ideally consists of five classic elements:

Correctly structured and well told, this structure not only attracts more attention, but also creates a connection and identification with what is happening. Listeners put themselves in the situation, feel it and see things from the perspective of the protagonist.

Storytelling in Marketing: How Companies Use Stories

In recent years, many companies have recognized how great the effect of good storytelling can be - especially for marketing and the external image of a company. Emotions that are aroused by storytelling have a much stronger effect than any advertising promise. Companies not only score with quality. If storytelling is used correctly in marketing, customers immediately associate a certain, positive feeling with a brand. It not only offers recognition value, but also a means of identification.

Another example shows that companies should not underestimate the effects of storytelling. The film student Eugen Merher shot a commercial for the Adidas company during his studies - but they turned it down twice. A mistake, as it turned out, because the storytelling commercial about an old runner now has almost 15 million clicks and, in the form of a story, conveys exactly the emotions of motivation and passion that a sporting goods manufacturer wants.

Well, not everyone is a born storyteller or can tell emotionally charged stories like a marketing department. But the art can be learned and improved. In this way you can become a better speaker yourself or optimize your content marketing strategies. Because here, too, a good story is always the basis.

The following tips can help you learn storytelling:

After a lot of theory, finally, practice: We have listed a few examples of storytelling. These can inspire you and show you what a well-told story is all about:

Example: story of dealing with people

During the first few weeks at the university, the professor handed out a questionnaire to his students. It was a kind of quiz about their motivation to study here, mixed with a few questions about the university itself. Only the last question was out of the ordinary, it was: "What is the name of the woman by first name who regularly cleans this classroom?" In fact, it was hardly possible someone answer the question. Most of the students had seen the cleaning lady a few times and knew that she was around 50, had dark hair and a Spanish accent. But nobody knew her name. As well as? Nobody had ever exchanged a word with her. So most of them left the answer field for this question blank (some at least tried chutzpah and wrote down an advised name).

When everyone submitted the questionnaire, one of the students took heart and asked the professor directly on this question: “Will this question have an impact on the overall grade at the end of the semester?” He wanted to know. “Absolutely,” replied the professor, explaining why: “In your career you will meet a bunch of people. And all of them will be very important. And I really mean EVERYONE. Every single one of them deserves your attention, your attention - but at least a smile. "

The student never forgot this lesson - as well as the name of the cleaning lady, about which he asked her shortly afterwards. Her name was Dorothy.

You may not soon forget this anecdote either. And that's the point: good stories can inspire, captivate and carry away people. You can get people to follow the narrator and take action. You can breathe life into cold, bare numbers.

Correspondingly, one could also get involved like that Lecture start:

Ladies and gentlemen, I am sure you are now expecting me to give a lecture. But the truth is: I'm not a great speaker. Instead, I'm going to tell you a story. A true story that happened just recently ...

At least now you will be able to hear the falling pins in the room. The audience will be as quiet as a mouse and literally stick to the lips of the humble speaker, who is certainly a great talent. Because he's doing it just right. Storytelling turns a story into much more than just a text.

After all, all of the examples also show what makes a good story and a convincing storyteller ...

There is a wonderful story about Dropbox founder Drew Houston, which he once told in an interview with the New York Times, and which is said to be the recipe for success in his life. It consists of three parts. Houston tells her like this:

If I today Slipping a cheat sheet to my 22-year-old self could, it would contain the following: a tennis ball, a circle and the number 30,000:

The Tennis ball stands for something that you are infatuated with, that you are passionate about. The tennis ball reminds me of my dog. He always goes crazy when I play with him and throw the ball. It is comparable to the most successful entrepreneurs I know: They all have something that they are positively obsessed with. Something that is really important to them.

The circle again should remind me of my closest friends. You are the average of your five closest friends. So you should also make sure that you surround yourself with people who want the best for you and get the best out of you.

The Number 30,000 finally makes me realize that most people only live around 30,000 days. When we look at this number, we become conscious of using every single day that life gives us and getting the most out of those 30,000 days.

For the board meeting of an international corporation, the members were invited to one of the finest and most expensive restaurants in town. It was in the immediate vicinity of the company headquarters and so the board members appeared punctually and in a good mood, chatted a little over champagne and finally took a seat at the luxuriously set table. Everyone was looking forward to the local star chef's legendary menu. But it did not get to that.

More and more homeless people were gathering outside. They looked through the panes, pressed their dusty noses against it, and knocked insistently on the window.

The clatter grew louder and soon mixed with chants. A cozy meal was out of the question, and more and more bosses wondered what the host would do about it: would he ignore the bums or call the police? None of this happened.

Instead, he opened the door and let the pack in. The people smelled like a chemical plant incident. Most of all, they were hungry. To the great horror of the board members, the CEO invited them to the table. The round was extended and the strangers attacked the first two courses as if there was no tomorrow.

After that, they didn't disappear, but berated the managers: How can you stuff yourselves with lobster, foie gras and champagne every day while we're hungry? The board members tried to maintain composure.

They are now managers of a large corporation and have a lot of responsibility, they tried to defend themselves. That didn't convince the homeless. The managers were increasingly on the defensive.

Finally the host broke off the farce. He explained to his amazed colleagues that the vagabonds were really actors, hired to prepare everyone for the only point on today's agenda: corporate social responsibility.

The incident is said to have actually happened that way. True or not, it doesn't matter: the anecdote teaches two things:

Example: A lesson about a short sale

Young Bill wants to get rich with his own ranch. So he buys a horse from a farmer. He pays the farmer 100 dollars for this, who in turn promises to deliver the horse the next day. But things turned out differently: The next day, Farmer Bill brought only bad news: the poor animal died that night.

Then Bill says: “No problem. Just give me my money back! ”But the farmer says no:“ I already spent the money on fertilizer yesterday. ”Bill thinks for a moment and then only says:“ Then at least give me back dead horses. I want to raffle it! ”The farmer is completely confused:“ You can't raffle a dead horse! ”He wonders. "Yes, yes," says Bill, "I just don't tell anyone that it's already dead ..."

Months later, Bill and the farmer run into each other. The farmer immediately notices the fine clothes and obvious wealth in Bill. “And ?!” he asks curiously, “how did the raffle for the carcass go?” Bill grins: “Great! I sold over 500 tickets at $ 2 each and made almost $ 1,000 profit. "The farmer shakes his head:" But weren't there any complaints about the dead horse? "Bill grins even broader:" Yes, the winner is complained, "says Bill. "But I just gave him back his 2 dollars."