Teaching can be a psychological risk

The high school graduation class 2021 in times of Corona: worries about the future and psychological stress are increasing

Since the spring of 2020, everyday school life has changed significantly for many young people: distance learning, alternating lessons and hygiene concepts in school have become a changed normality, as has the restriction of social contacts. As part of the study “Career Orientation: Career and Study Choice” (BerO), the IAB surveyed the effects of these changes from the perspective of those affected for the 2021 Abitur class.

Since March 2020, the debate about the necessity of school closings has been an integral part of the social and political discourse. The focus is on the one hand on the role of schools in the pandemic and on the other hand on the effects of the missed lessons on the families affected and on the future prospects of young people.

In this context, social science studies on the consequences of missed lessons, for example due to the short school years in Germany in the 1960s or due to teacher strikes in Belgium, Canada and Argentina, are informative. They show that extensive missed lessons are associated with negative consequences on the labor market in the long term. For example, the income of the cohorts affected was lower than that of other cohorts over the entire course of employment (an overview of the relevant findings is given in a contribution by Silke Anger and Malte Sandner published in the Ifo Schnelldienst in 2020).

Current studies on the effects of the Covid-19 pandemic suggest that the negative long-term consequences of school closings can also be dependent on the family. One example is a study published in 2021 by Hans Dietrich, Alexander Patzina and Adrian Lerche. According to her, prospective high school graduates from uneducated parents did less for the school than those from educationally affine families during the school closings in spring 2020. School closings can therefore exacerbate existing social inequalities in the school system and cause long-term disadvantages in working life.

A large-scale and repeated student survey by the IAB now provides information on how the school situation, everyday life and the subjective future prospects of students have changed in the course of the pandemic.

The learning situation in distance learning has improved

In spring 2020, schools had to switch from regular lessons to distance learning within a few days. After the gradual opening of the schools, local school closings or distance lessons for individual class groups took place again after the summer vacation. Thus, alternating and distance lessons have been constant companions since the first nationwide school closings.

While all students were in distance learning in spring 2020, at the time of the new student survey in autumn 2020, only 20 percent of those surveyed in the current high school graduation class were affected by restrictions on face-to-face teaching. This group is in turn divided into four subgroups (see Figure 1): 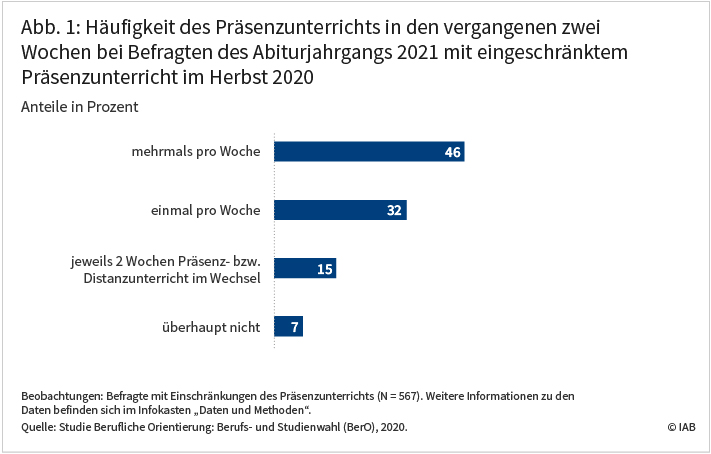 The latter two groups reported that contact with the school had improved during the limited regular classes compared to the spring. The proportion of those who had daily contact with their school in distance learning rose from 59 percent in spring to 75 percent in autumn.

Distance teaching took place in the autumn mainly in digital classrooms, i.e. as virtual lessons or via online platforms on which working materials were made available. The daily use of these channels represents a clear improvement compared to the spring: The proportion of high school graduates who received materials via online platforms on a daily basis rose from 43 percent to 66 percent, the proportion of teaching in digital classrooms from 21 percent to 59 percent . The daily exchange via e-mail, on the other hand, only played a subordinate role and fell from 38 to 28 percent (see Figure 2). 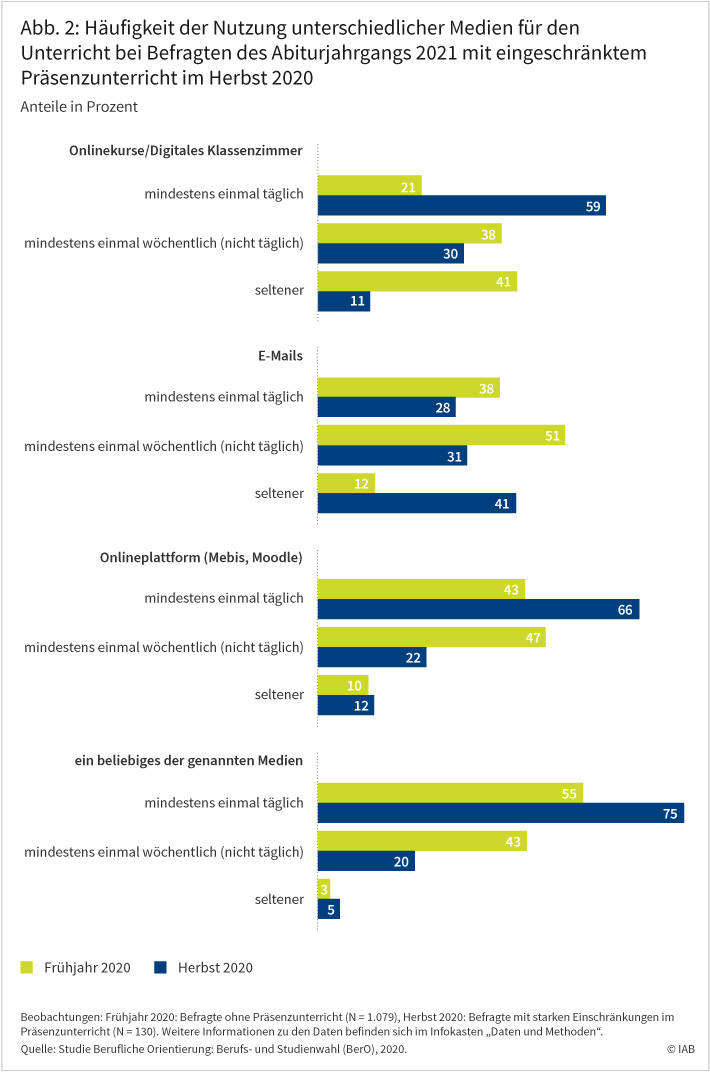 Concerns about the professional future have grown significantly

The missed lessons can have an impact on school performance and the extent to which you are informed about the upcoming career and study choice. In autumn 2020, a subgroup of the BerO study who had restrictions in face-to-face teaching at the time of data collection (567 people) was surveyed. Overall, the findings suggest that concerns about school performance are on the decline. This decrease can be determined for all student groups. However, in autumn 2020 half of the respondents with a migration background were still very concerned that distance learning would affect school performance (see Figure 3). 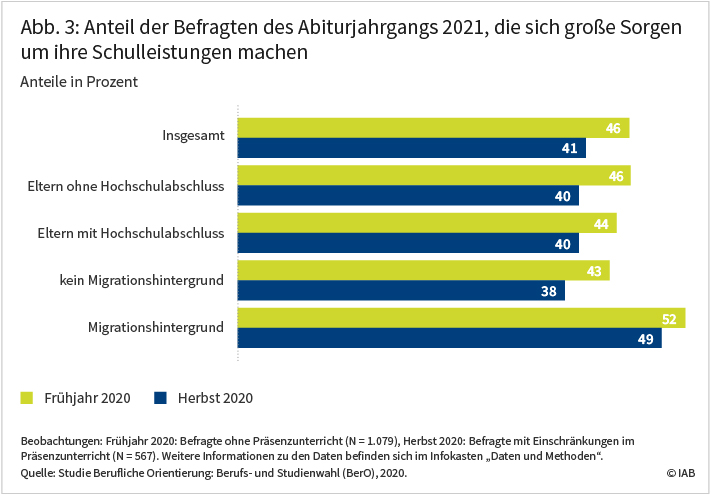 Although fewer young people were worried about a deterioration in their academic performance, worries about their future careers increased. This share was 25 percent in spring and 41 percent in autumn (see Figure 4). 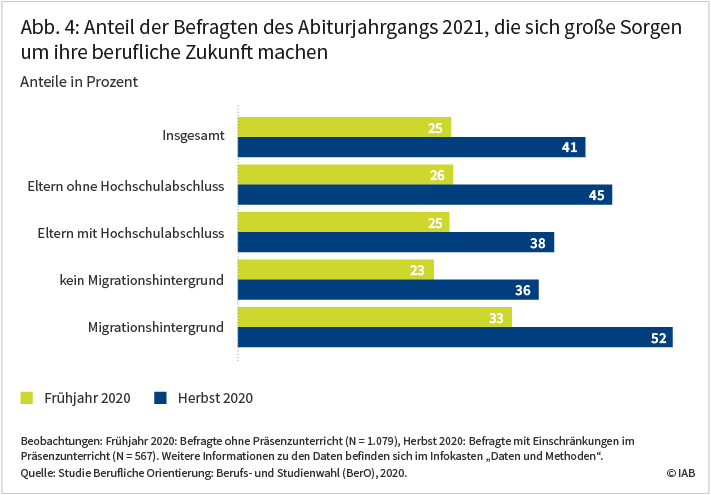 The concerns of young people with a migration background have increased even more. As early as spring, the proportion of those in this group who were very worried about their professional future was 10 percentage points higher than among young people without a migration background (33 versus 23%). In the autumn survey, the difference was as much as 16 percentage points (52 versus 36%).

These findings make it clear that the restrictions on face-to-face teaching are making the current Abitur class very insecure with regard to their future prospects on the job market. Pupils without current teaching restrictions, for whom no information is available, are likely to have similar concerns. This is where career counseling offers could start, providing those affected with central information so that they can make well-founded professional decisions in times of the pandemic.

The subjective well-being has clearly deteriorated

Information on subjective well-being also provides information about how well those affected are coping with the current situation. Those who had no restrictions in face-to-face teaching at the time of the survey in autumn 2020 were also surveyed, which allows a comparison regardless of the restrictions at the school.

The subjective well-being of high school graduates has deteriorated due to the corona crisis. This applies both to general life satisfaction and to psychological stress. In the course of the pandemic, the proportion of those who stated that they were satisfied or very satisfied fell by 10 percentage points (see Figure 5): Their proportion fell from 71 percent in spring to 61 percent in autumn 2020. The proportion went independently from parental education or from a migration background to the same extent. 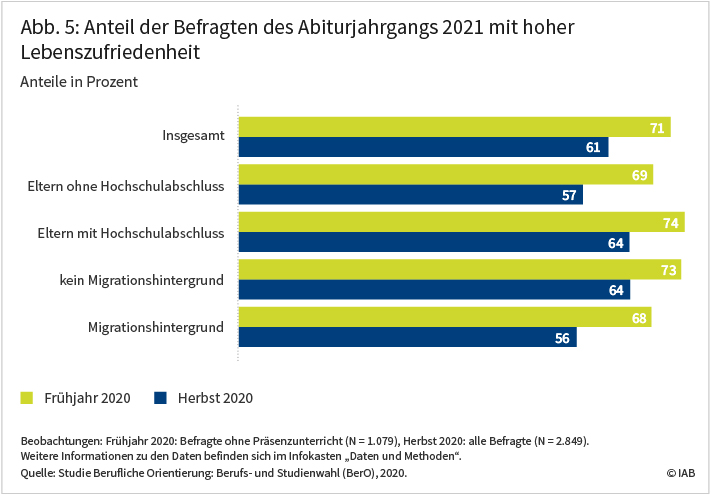 Analogous to the deterioration in general life satisfaction of the respondents, their psychological stress increased sharply (see Figure 6). The proportion of those who feel psychologically stressed rose from 32 to 51 percent in the course of the pandemic (for more details, see info box "Data and methods"). These values ​​suggest that around half of all adolescents are at increased risk of mental illness.

A particularly high risk is shown for young people who come from non-academic homes or from migrant families. The proportion of adolescents who have an increased risk of mental illness is even 56 and 58 percent. 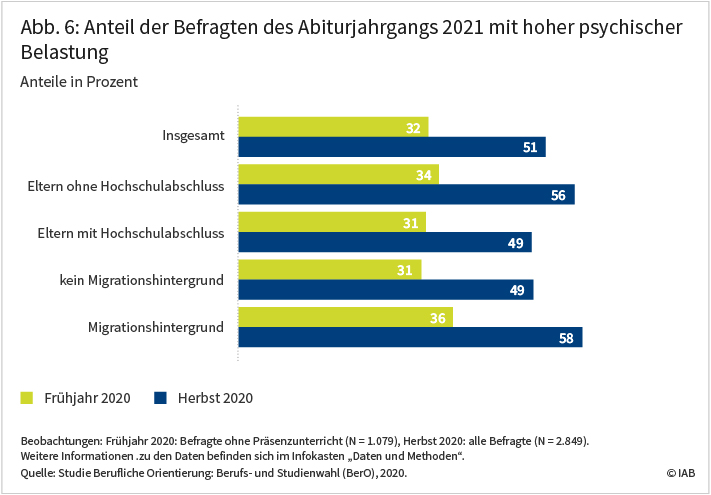 These findings differ significantly from the results of previous studies carried out before the pandemic. A study by Max Herke, Katharina Rathmann and Matthias Richter published in 2019 came to the conclusion that the subjective well-being of young people in Germany changes little over the course of secondary school.

As part of the study “Career Orientation: Career and Study Choice” (BerO), the IAB surveyed schoolchildren in the 2021 Abitur class about the effects of the Covid 19 pandemic on their teaching situation and their future plans. The survey took place both immediately at the beginning of the pandemic in spring 2020 and in autumn 2020.

Of those surveyed who were in distance learning in autumn - i.e. before the second nationwide school closings - more stated that they were in a more regular exchange with their school compared to the spring. And worried a little less than in the spring about their school performance. An improved online offer and less burdensome restrictions can be reasons for this. At the same time, however, worries about the professional future and the psychological stress of the respondents increased sharply.

Young people who are about to graduate from high school, in addition to the upcoming final exams, are also challenged because they have to decide on a course of study or vocational training and thus set the course for their professional future. Personal career counseling, even if it can currently only take place digitally, is of particular importance in such a situation. This can provide pupils with information on choosing a career and course of study and on the corresponding financing options that are tailored to their particular individual situation.

Since inequality in adolescence tends to solidify rather than weaken over the course of individual life, students who have a migration background and who come from families with little education should be given special support at the moment. Because, according to their own assessment, they are more severely affected by the consequences of the Covid 19 pandemic. Reasons for this can be short-time work or the loss of a job by parents, which more often affect young people from socially disadvantaged households. They affect the financial situation of the parental home, which is still an important factor influencing educational decisions and the mental health of young people.

Support offers should therefore be improved especially for these groups of young people. For example, an adjustment of the BaföG is conceivable. These offers should also be accompanied by targeted information campaigns. It is important to point out the range of these offers.

The evaluations are based on information from 2,849 pupils from grammar schools and comprehensive schools with upper secondary school in 195 schools in 8 federal states (Baden-Württemberg, Bavaria, Berlin, Hesse, Lower Saxony, North Rhine-Westphalia, Schleswig-Holstein and Saxony) who came before the second school closings in November and December 2020. These are compared with responses from 1,079 young people of the same age group who took part in the BerO study during the nationwide school closings in spring 2020 and were asked about the situation at the time. The survey period in the first survey wave from March 24th. until July 3, 2020, in the second wave of surveys from November 16. until December 21, 2020.

Respondents rated their concerns on a scale from 1 (not at all worried) to 10 (very worried). Values ​​from 7 to 10 are defined as major concerns. An equivalent approach was used for life satisfaction. The scale of the Hopkins Symptom Checklist (HSCL; see Derogatis et al. 1974) is used to record the psychological stress, which indicates an increased risk of anxiety disorders and depression above a certain accumulation of symptoms. High psychological stress is defined as an average value greater than 1.8.