Mixes or produces a better skill

10 tell-tale signs of an amateur production

We have all experienced this before: Less than 10 seconds of an unknown piece of music have been played, because you instinctively know that this song was recorded and mixed by an amateur in a home recording studio. We now have 10 tips for you that are guaranteed to expose any amateur production - stumbling blocks that you should urgently avoid.

This is how you expose any amateur production

It is rather other more or less obvious aspects and points of view that expose the amateur during recording and mixing. This is exactly what this article is about.

It is important to know these 10 telltale signs, because this is the only way to avoid them in your own productions in order to create better and more professional-sounding recordings and mixes:

Nothing says more amateur as a mix that is too bass-heavy, the low frequencies of which sound erratic or pumping and overlay and undercut the rest of the mix.

Beginners like to listen to recordings and mixes through headphones or speakers that are too small to underrepresent the bass frequencies. Of course, the low frequencies in the mix are then turned up to compensate for the lack. However, this then leads to pulpy and poorly differentiated mixtures.

In order to avoid such excessive bass-heavy mixes, you should also check your songs on other monitoring systems (e.g. car, kitchen radio, stereo system) and compare them with commercial reference CDs again and again.

2. Volume and sound of the drums

In a band, the drums are the most difficult instrument to record. Every single element of the recording chain can have a huge impact on the result: the room, the individual drums, the microphones used (and of course also the performance of the drummer). Professional sound engineers often spend days or weeks trying all elements of the recording chain to make sure that the drums are optimally recorded and that no single drum overshadows the others in the mix. The use of up to 10 microphones when recording drums is not uncommon - and of course not every home recording studio can keep up.

But even if you can't keep up with the big ones, you should at least pay attention to a good balance of the individual sounds when recording or mixing. If you have problems with the volume of the individual drum elements, you can help yourself with a simple trick: First you look for a modern production that is tonally similar to the song you are currently mixing and play it. The volume of the playback is steadily reduced and the quieter it gets, the more elements disappear into what is no longer audible. In modern music, the last still audible elements are usually the kick drum, the snare drum and the lead vocal. Now you can try to reproduce this balance in your own mixes.

3. Instruments masking each other

This problem has as much to do with arrangement as it does with production. Parts of a music production or certain instruments can lose their demarcation from others if they are not assigned their own place in the arrangement. This phenomenon is very typical for amateur productions, because many of us are still writing and adding new parts to the songs while they are being recorded, instead of structuring the arrangement and adapting it to the needs of the song in advance of the recording.

There is actually nothing wrong with this approach if you rework accordingly.

So if you find that the individual tracks or instruments in the mix can't really set themselves apart from each other, then it's time to think about the arrangement and make room to breathe.

You can find more information about masking in these two articles:

The biggest difference between professional superstar singers and us wannabes is not keeping pitch, tone or vibrato. If you listen carefully, you will find that some of the best-selling artists are actually quite bad singers ...

What really sets them apart from amateur singers is their ability to sing dynamically. A great singer knows how to control the volume of his voice and, more importantly, he knows when he has to change the volume. This has just as much to do with the “voice” instrument as it does with the skill in front of the microphone.

Amateur singers can be caught whispering 10cm away from the microphone or screaming with the microphone in their mouths. This leads to uneven recordings of the voice, which in turn say "amateur".

The correct recording of vocals is actually not difficult at all. The most important and most ignored thing is practice! Before the first recording is made, the singer has to know every word and every change in the song and know when to sing and how. It is best to go through the breathing spots with the singer as well.

Reverb is an effect that is best used very sparingly - regardless of whether it is about creating more depth or three-dimensionality. Beginners and amateurs often work according to the “something is good, more is better” method. In current, modern music productions, however, reverb is only used very, very sparsely (unless the aim is to deliberately make the effect prominent). Most of the time the reverb is almost inaudible and gives the voice a little more texture.

A simple rule for using reverb is to make the effect louder until it is just audible, and then turn it back a little. You have to withstand the urge to situate the voice in deep chamber or room effect presets.

Even inexperienced ears can hear the difference in sound quality between a Lexicon reverb unit for EUR 3000 and a reverb effect built into the multitrack recorder. This is because people are exposed to the most varied of hall effects in nature and their surroundings every day.

If you can't afford an expensive effects device for reverb algorithms, you can take a look at the plugins. The VST plug-in SIR is considered one of the best and is even available for free. When in doubt, it is better to omit the reverb entirely than to use a bad-sounding reverb. 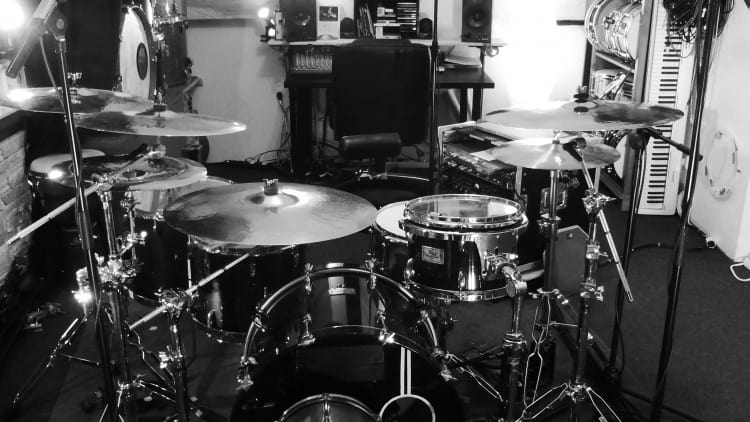 Jörn Schwarzburger's Drumdubs Studio. An alternative to a drum kit from the sequencer.

Or rather: drums obviously created in the sequencer, which are supposed to pass as real drums. While this is not a problem in electronic music, where the beats are played by drum machines. But in pop and rock music the dynamic requirements are higher and the listener is used to natural and nuanced sounds from the drums.

The amateur mix is ​​easiest to hear on the ride cymbal or the snare drum. The sound of a real snare drum depends on where and how hard the stick hits the drum. And that applies even more to the ride cymbal, especially near the raised area in the middle. If a piece of music now plays the same sample of a ride cymbal in eighth-note rhythm for 16 bars, then it is also clear to the layman that something is wrong.

With a little more effort, programmed drums can also sound realistic and the groove quantization built into many sequencers can also bring a little more humanity to the beats.

If a song has lyrics or a vocal track, then a listener should also be able to understand the content of the words. Of course, this seems elementary, but many beginners and amateurs overlook this fact.

There are several possible reasons for incomprehensible vocals. One possibility is the so-called proximity effect with directional microphones. If the sound source is too close to the membrane, the low frequencies will be increased. This can be remedied simply by moving the microphone a few centimeters away from the sound source.

Another reason could be the lack of a pop filter, because in the worst case this translates hard consonants into a small stream of air that causes pops and pops on the recording. Such a recording sounds carefree and lazy. If you don't want to afford a pop filter, you can put together a pop filter from a clothes hanger and a nylon stocking. The effect is satisfactory even with the DIY method.

Furthermore, an incorrectly set EQ is often to blame for incomprehensible vocals. Too often you tend to want to improve a vocaltrack by boosting the high frequencies, making the vocal too edgy, sharp and sometimes even thin without increasing the clarity. On the other hand, it is much more effective to “clean up” a vocal track with a low-frequency cut around 100Hz and to improve speech intelligibility a little with a minimal boost around 4-5kHz.

9. Too much (bad) surround sound

Anyone who does not have an acoustically treated or very large recording room should be aware that the recording room is anything but optimal. On the other hand, a bad sounding room doesn't automatically mean a bad recording. Many commercial albums have been recorded in such suboptimal environments, but care was taken to keep the spatial sound that can be heard in the recordings within limits.

Matching tutorial: Set up the microphone correctly in the room »

In order to keep the surround sound as low as possible, you should choose microphones with cardioid or figure-of-eight characteristics and microphone as close as possible to the sound source.

Professional musicians often practice weeks or months before going into the studio. As mentioned above, amateurs tend to write and record their music on the fly, which in turn means there is simply no need to practice. Often there is also the fact that you think you can correct mistakes in the mix and therefore keep recordings that are anything but perfect.

But if you want to sound professional, you have to strive for perfection and must not have any mistakes in the final tracks. A single mistake can expose a song as an amateur mix.

In other words: good bands are tight, and if your own music production doesn't sound tight, then the audience automatically thinks you're not good. The key is extensive practice before hitting the record button.

Those were the 10 tell-tale signs of amateur production. Do you know any other pitfalls? We look forward to your comment.