One of the classics of zoological literature is of course the "animal life" of the unforgettable Alfred Edmund Brehm from Renthendorf in Thuringia near Neustadt an der Orla. However, less because of the scientific content of the work than because of the extremely flowery language in which the species descriptions are available. Because it is indeed based on the state of zoology in the 19th century, but is by no means too good for human evaluations.

The hyena should not be missing in this hodgepodge of noble and less noble representatives of the animal kingdom. So what does Brehm write about them? An excerpt: "In addition, all hyenas are nocturnal animals, have a screeching or really horrible laughing voice, are greedy, voracious, spread a bad smell and have only ignoble, almost limping movements: in short, it is impossible to call them beautiful."

And indeed, those in Africa and - in the case of the striped hyena (Hyaena hyaena) - Carnivores also living in parts of Asia usually display a rather strange behavior: This is how the spotted hyenas wallow (Crocuta crocuta) gladly in rotting flesh, because the more they stink, the higher they rise in the course of their cronies. In the savannahs of East Africa they wage real wars against lions, whose offspring they kill when the opportunity arises. And maybe they contribute their mite to the extinction of the wild dogs, from which they prefer to hunt their prey and which are particularly rare today where the hyenas prosper.

In addition - and this is unusual for pack-forming predators - the animals have reversed the distribution of roles: a female is - excuse me - the master of the ring and leads the group. The alpha hyenas are larger, more aggressive and more assertive when it comes to distributing the prey than any male. Yes, they even have a kind of pseudo-penis, which presents even experienced observers with identification problems, at least from a distance. The clitoris of the animals is elongated and protrudes far from the inside of the body.

This anatomical peculiarity is possibly related to another peculiarity of the spotted hyenas, which has now been uncovered by biologists working with Stephanie Dloniak from Michigan State University in East Lansing. For more than twenty years they have been observing a stable matriarchy of the species in the Kenyan Maasai Mara reserve and have focused, among other things, on the reproductive success of the females and the development of the respective offspring.

With the hyenas, it is not the case that only the alpha female gets involved with men, but other feminine parts of the pack of up to sixty heads are allowed to do so too. With this, however, the offspring of the lead female gets unfavorable competition in their own clan, which in turn cannot be in the mother's interest. However, as Dloniak and her colleagues noted, the pupils of the alpha female behave in accordance with their status soon after birth: They are more aggressive, more robust and already show a significantly more sexualised behavior during childhood - in the form of playful climbing of peers of the same age - than them Boys of subalterns. Their chances of surviving and taking over the pack leadership themselves are considerably higher than those of their competitors.

But where does this advantage come from? Are they better cared for than their comrades? Is it because of some kind of different upbringing? Are you already sucking up this status thinking with your breast milk? The latter comes pretty close to the truth, because according to the research of the scientists, the alpha female gives her potential alpha children the appropriate dose of hormones for self-expression and assertiveness in the womb.

In the faecal samples they analyzed, the piles of alpha females in particular showed significantly increased levels of androgens in the last weeks of pregnancy - a mix of male sex hormones that controls the development of muscles and influences both aggressiveness and sexual behavior. It is passed on from the mother to the unborn via the placenta, with male and female young benefiting equally from it.

Alpha females can afford this subsidy because, due to their strength, they still appear very robust on the carcass even when pregnant and thus get hold of more nutritious meat than their competitors. The hormone-related future strength of assertion and repression of young women is at the same time expensive at the cost of the anatomical change in the clitoris, because mating and giving birth are made significantly more difficult by their lengthening.

According to Dloniak's team, the increased hormone intake could not only be part of the problem, but also its solution. Since the male offspring of the pack leaders practice pairing in early childhood, they tend to learn the finesse of complicated copulation and are later more successful in fathering children. The penetration into the clitoris succeeds only if the male hits exactly the right angle when climbing.

So, with her hormonal dowry, the supreme mother of the company not only ensures that the female pecking order is maintained, but also that her sons can preferentially pass on the line of rule? What would Alfred Edmund Brehm have said about this very special kind of emancipation? 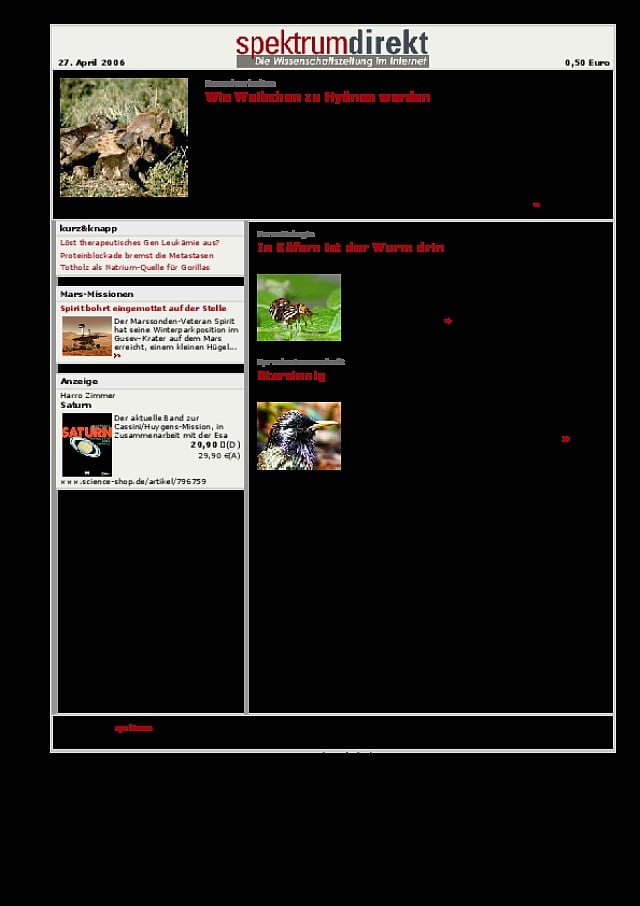