Is it good to burn sanitary towels?

Even with a little something like a sanitary napkin you can make a contribution to the protection of soil, water and the environment. The nature lover Xie Keman and her colleagues show with their initiative that something can be done for environmental protection now and immediately and that every company should take ecological responsibility.

Xie Keman (谢 可 曼) and Mai Yatang (麦芽糖) were still attending university when they realized in late 2013 how unecological it was to use disposable pads. Above all, their material was not comfortable to wear and sometimes even caused allergies. “Mai Yatang was looking for a solution to the problem. She is a born activist and when she has something in her head, she wants to put it into practice. Since I was also of the opinion that something could be done together in this matter, we quickly came to an agreement. We decided to develop a washable and environmentally friendly sanitary napkin, ”says the rather reserved Xie Keman.

The two friends of nature from the generation of the so-called "post-90s" first began to research and check the feasibility of their idea before they set about a draft, the design and the search for the right raw material. A series of tests followed until they had developed the first “Buzhidao eco-sanitary napkin” (布 知道, roughly: “the fabric knows about it”). Half a year later, after the ecological cloth bandage had gone through a market test and had been further improved, the first version of the product was ready for the market. At the same time, Xie Keman and Mai Yatang founded Chengdu Happylife Sustainable Technology Limited (成都 永续 活 永续 科技 有限公司). Since then, it has not only been their job to present the fabric sanitary napkin they have developed to consumers, it is above all a matter of concern to them to express their respect for the earth and the lives of the farmers.

Xie Keman's grandfather's family lives in the country. Extensive fields stretch out in front of the front door, embedded in green mountains. Whenever Xie Keman, who grew up a real country kid, returns here, the stress and worries she brings with her from work in the city are blown away. With the proximity to the arable land and nature, relaxation sets in automatically. If, on the other hand, people have not been in contact with nature for too long, they become physically and mentally ill. This also affects companies. Therefore, Xie Keman hopes that in the future more companies will take responsibility for the environment instead of overexploiting natural resources out of greed for profit. That is the real idea behind the Buzhidao eco-pad.

The environmental protection potential of a sanitary napkin

The raw material for eco-sanitary towels is cotton. Although cotton accounts for only five percent of the global cultivation of crops, cotton cultivation devours a quarter of pesticides and a fifth of artificial fertilizers. The soil on which cotton was grown is therefore much more poisoned than the fields of other crops. In addition, cotton is sprayed with pesticides at high frequency, sometimes every two to three days during the ripening period. So it is difficult for cotton farmers to forego the use of chemicals. The excessive use of pesticides not only increases the resistance of the pests in the long term, it also causes the poison to seep into the soil, contaminate the groundwater or get into rivers. It causes severe water pollution and damages the entire ecosystem. Certain cotton farmers are affected by chronic diseases to varying degrees due to the incorrect or excessive use of pesticides. This ranges from allergies to severe skin eczema. Since the farmers do not have the money for medical treatment, they are often ailing. At some point they run out of strength and the families slide more and more into poverty. A fatal vicious circle.

In order to put a stop to the harmful effects of pesticides and fertilizers on the soil and the surrounding area, to protect the interests of cotton farmers and to get organic cotton for the production of the organic towels, Xie Keman and her team looked for farmers in Shandong Province who were open to a ecological conversion and the cultivation techniques of an ecological mixed culture were. They provided the farmers with the technical know-how and provided support for the difficult growing phases. They showed them that you can have cotton crops without pesticides and artificial fertilizers; that you can protect the soil without suffering economic losses. If the cotton harvest was bad, they and the team took over five percent of the losses; if the harvest was good, they took the cotton at 2.5 times the market price. These measures encouraged the farmers to get involved in organic farming. "And since the soil is not polluted by pesticides and fertilizers, the farmers can also grow other crops on the same field using ecological methods," explains Xie Keman.

She made another calculation: There are currently over 200 million women in China who need sanitary towels. Assuming that girls start menstruating at the average age of eleven and menopause when they are around fifty, women use sanitary napkins every month for about four decades. A Buzhidao organic pad has a lifespan of two years. Assuming that ten pads are needed for each period, every woman would get by with just over two hundred organic pads in her life. However, if you use disposable sanitary napkins, every woman uses around 10,000 to 13,000 pieces. “In addition, the used disposable sanitary towels cannot be recycled. Usually they are buried or burned. A bandage needs a hundred years to be ecologically degraded and incineration is not possible without harming the environment. Toxic pollutants such as dioxin are produced, ”says Xie Keman,“ the material used for Buzhidao pads, on the other hand, is a natural raw material - cotton. After being thrown away, it has a very short breakdown time and no toxins are released when it is burned. It's like burning wood, the damage to the environment is pretty little. " 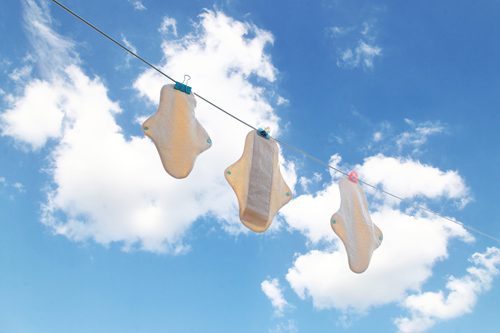 With both feet on the ground and looking to the future

Behind every Buzhidao organic pad there is a long manufacturing process of at least five months: starting with hand-picking the cotton, separating the cotton fibers from the seed kernels, cleaning foreign fibers, pressing into bales and spinning the cotton to product design and quality tests , Storage and shipping. Even though Xie Keman's core team was originally expanded from two to eight, the employees have their hands full. Everyone puts their love of the environment into practice in a different place, for example in Beijing and in Shandong Province or in Nanchong and Chengdu in Sichuan Province. It is also noteworthy that when recruiting staff, the company has repeatedly shown itself to be open to disabled applicants with the appropriate skills. So among the employees of the current team are one physically handicapped and two hard of hearing.

Even though the Buzhidao eco-sanitary napkin is now available in a third, improved version, Xie Keman speaks openly about the reservations people have about their product and about the entrepreneurial pressure that weighs on it. One sticking point, for example, is the covering with the raw material organic cotton. Because there is no firmly established market for this, it is not possible to simply use cotton that is available on the market for the production of organic towels. In addition, in order to get the optimal material, the cotton grown in the same year must be used if possible. Compared to buying up raw materials on a market, the search for the right raw material is not so easy here. In addition, the Ökobinde does not compete with other market participants as a purely commercial product. On the one hand, the farmers have to be supported technologically, and on the other hand, they also share in any losses. The consumer, for whom organic cotton can hardly be distinguished from conventional cotton, usually makes his purchase decision based on the price. All of this represents a great challenge for the Buzhidao sanitary towels. Some consumers initially have the feeling that they are falling back into the age of their grandparents with the washable sanitary towels. You almost see it as a step backwards. A prejudice that became the greatest hurdle for the eco-sanitary napkin.

Despite these challenges, the project also has its positive sides: When you “identify a problem, take action, develop something and finally get confirmation from the customer”, it may sound like a completely normal sense of achievement, but Xie Keman and her team draw on it from it a lot of joy. “We do not have high hopes that every woman will use our eco-pad. But we would be delighted if people didn't react in astonishment when they heard about this brand or would not express their skepticism or prejudice towards us, ”says Xie Keman. “Even if the bandage may not be that practical yet, we can guarantee its safety and comfort. We would like to give people an alternative: a product that benefits the environment and with which one also feels comfortable. "

“Even with a little something like a sanitary napkin you can do something for the environment. Even if it is only about a niche product, we fully support the product. I hope that in the future even more companies will take responsibility for the environment and set a revolution in motion: From now on, everything must be done against the excessive consumption of environmental resources by manufacturing high-quality and long-lasting products ”. Xie Keman seems one hundred percent determined to do so.
<?