Where do cathode rays begin

On the night of November 8th, 1895, it was cold and dark in Würzburg. Many people are already sleeping, but a light is still on in one of the windows. The physicist Wilhelm Conrad Röntgen works in his laboratory. Little does he suspect that by chance he will make a discovery that will bring him the first ever Nobel Prize six years later, on December 10th, 1901.

Like many of his colleagues, he experiments with the cathode rays, which were newly discovered at the time. To do this, he has obtained one of the so-called gas discharge tubes (or Hittorf-Crookes tube), in which a high voltage is applied. Due to the strong acceleration of the electrons between the anode and cathode, you can see a narrow, glowing strip in the tube. 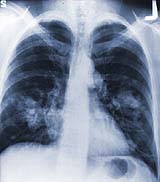 However, Röntgen notices another effect: in the darkened room he discovers a glimmer of light on a fluorescent screen. And also some crystals, the remains of the barium platinum cyanide coating of the shade, which are still on the table, begin to glow. The light from the cathode rays is far too weak; they cannot be responsible for this effect. Röntgen now covers the tube with black paper, but the screen continues to glow. The mysterious and previously unknown rays from the tube can even reach him from a distance of two meters.

Since the black paper could not stop the rays, Röntgen tried to let them penetrate through other objects. He looked through a wooden door, a whist game, hard rubber, silver, gold and lead. As an enthusiastic hobby photographer, the physicist came up with the idea of ​​blackening photo paper with the rays. This is how the first x-ray images were created, such as the image of his wife's hand being x-rayed. In addition to the knowledge that X-rays, as Röntgen called his discovery, penetrate less dense material better than bone or metal, Röntgen also recognized that lead shields the rays and is therefore suitable as radiation protection. His experiments were so extensive that it took more than ten years for other physicists to gain further knowledge about X-rays.

Although Röntgen initially did not ring the bell about his new discovery and did not announce his experiments to the Physico-Medical Society until the end of December, the X-rays, which were later named after their discoverer, soon attracted a lot of attention. The picture of Ms. Röntgen's hand with the bones made visible aroused a great deal of interest, especially in medicine. Doctors were thrilled to have come closer to their old dream - the transparent human being.

Just four months after its discovery, visitors to an exhibition in New York were able to X-ray their hands and see their own bones for the first time. In shoe shops it became fashionable to set up X-ray machines with which customers could check the fit of new shoes, and even at parties and societies, the guests sometimes enjoyed themselves by scanning their own hands and feet. The harmful effects of the radiation only became known later.