Who is popular Megadeth or Slayer

"The Big Four" could mean a lot. However, if you talk to a metal fan, it quickly becomes clear what it is about: Metallica, Slayer, Megadeth and Anthrax - The four big ones of Thrash Metal! These four bands that have made rock history played together on a stage on Saturday in Gelsenkirchen. A little historical classification - or a size smaller: a concert report. 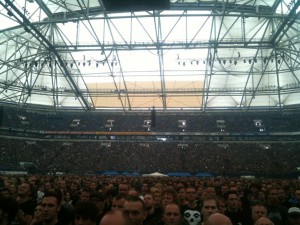 What in the 1970s Black Sabbath, Led Zeppelin and Co, were the Big Four in the 1980s: Metallica, Slayer, Megadeth and Anthrax. The four bands will (alongside Overkill, testament and Exodus) called the "inventors" of Thrash Metal. This particular genre of metal consists of classic metal (especially inspired by the so-called "New Wave Of British Heavy Metal" movement of the late 1970s in England), punk-hardcore elements, and fast and sometimes complex guitar riffs. These four bands show how multifaceted Thrash Metal is. While Slayer board uncompromisingly, Anthrax partly show particularly hardcore punk influences, Megadeth Emphasize the technically demanding area Metallica as an all-rounder with a pinch of classic hard rock influence. All bands were more or less strongly connected in the 1980s (joint concerts, band friendships9, but they were also very competitive. In the 1990s there was a break and there were many enemies. Especially Dave Mustaine (Megadeth, but in 1982 and 1983 Metallica- Was a member, because of but was thrown out of his binge drinking), Kerry King (Slayer, but also partly at Megadeth helped out) and Lars Ulrich (Metallica) were at the forefront when it came to disputes and so-called press feuds (stupid arguments about the press) went. Anthrax Didn't mess with others, but there were many problems and new members within the band. Musically, all bands moved away from Thrash Metal in the 1990s: Megadeth tried melodic hard rock with singer Dave Mustaine, who is a gifted lead guitarist and songwriter, but whose singing is reminiscent of a castrated dachshund; Slayer based on the Nu Metal movement, which brought the band a lot of ridicule and scorn from the old fans; Metallica gave up metal completely and devoted themselves to hard rock with blues and country influences; Anthrax tried crossover and made records Public Enemy.
In the middle of the last decade, however, the change came: Good old Thrash Metal is back, the bands concentrated on what they do best: give full throttle on stage! Be special here MetallicasDeath Magnetic (2008) mentions that it is not a cheap copy of their albums from the 80s, but still shows what Thrash Metal can sound like in the new millennium.

So now the time had come. All four on one stage! In one day! I couldn't even imagine something like that in my most beautiful dreams 5-10 years ago. So we went to the concert with two friends. Since I was able to strike the day before the official ticket sales, I have secured the best tickets ever: Front of Stage - right in front of the stage, even before the first breakwater. Arrived in the city of Gelsenkirchen (which was forbidden for me as a BVB fan) it was relatively quick in front of the stage and the first band started at 5 p.m. punctually. 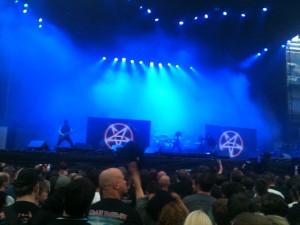 At Anthrax you can already hear the punk influences strongly, so the music is wonderfully suitable for an opener to get people in the mood. Unfortunately it is Anthrax also the band of the four, which is the "most unknown". So there weren't that many in front of the stage who recognized all the songs. Apart from Got the time, the famous Joe Jackson cover (a classic in the set of Anthrax), there was actually everything that can be accommodated in 45 minutes. For me were Caught In A Mosh, Madhouse, Antisocial and I am the law the favorites. The sound was good. Unfortunately, the only active founding member, Scott Ian, wasn't there as he recently became a father and stayed with his family in the United States. But the representation was official: it was played by Andreas Kisser from Sepultura. The avowed BVB fan from Brazil asked the audience shortly before the end of the set: “So, are any fans of Schalke here? No? Bavaria? No? But Borussia Dortmund, right? ". Then played Anthrax another little jam of the Sepultura-Classic Refuse / Resist. The fact that the five had fun on stage could not be overlooked - to play in front of almost 60,000 fans Anthrax never get it yourself; with them alone, a maximum of 600 spectators would probably pay entrance fees. Wrong, because Anthrax were certainly the biggest surprise of the day. [Complete set list here]

By the way: The words "moshen" or "mosh pit" come from Anthrax and had no meaning before the 1980s. The songs Caught In A Mosh (Anthrax) and Milano Mosh (of S.O.D., a side project of the AnthraxGuitarist Scott Ian) coined the term.

Opinions differ on Dave Mustaine. He's certainly not a simple person. But he did with the albums Peace Sells ... But Who’s Buying? and Rust in Peace written two album milestones of metal. But somehow it didn't really work out yesterday Megadeth: The sound was bad, Sustaine's voice was worse than it already is and somehow the band didn't seem really motivated either. Even classics like Peace Sells, Holy Wars ... The Punishment Due and Symphony Of Destruction did not ignite properly. Pity! [Complete set list here] 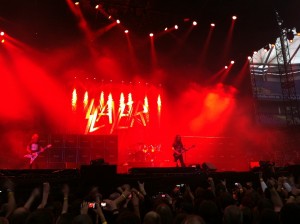 It is well known at festivals and concerts: if you are with a band whose concert is not really convincing, there is the “SLAYER! SLAYER! ”Shouts. Because at Slayer you know what you are getting. Aggressive, uncompromising Thrash Metal! There is bludgeoning as much as possible. Many would say: then it can't be good music! Exactly the opposite is the case. The album Reign In Blood (1986) can be described as the Thrash Metal Bible - this is how metal should sound (by the way, the album was produced by Rick Rubin, who was also released in 2008 Metallica produced and previously Run DMC, Johnny Cash, Red hot chili peppers and many more). The 1990 work too Season In The Abyss is divine. After some errors and confusions in the 1990s and another drummer, it's been back for some time Slayeras they all love. And so it was yesterday that the old classics turned almost the entire interior into a mosh pit: Post mortem, Dead Skin Mask, Black Magic and of course - Raining Blood. Also Slayer had to play with a substitute: Jeff Hanneman could wg. a spider bite (more metal is not possible!) not play. It was created by Gary Holt (Exodus) represented (by the way: Exodus and Sepultura (due to Andreas Kisser, see above) are clearly one of the really big ones in Thrash Metal!).
That was nothing for warm showerers. Unfortunately the sound wasn't perfect, but who cares when Tom Araya screams his heart out, Kerry King mows like no one else and Dave Lombardo kicks the drums to pieces. [Complete set list here]

Metallica - the biggest one!

My love to Metallica started in the mid 1990s when I like songs Fuel and The memory remains brought to the Californian metal band. Funnily enough, the albums back then were more rock-heavy, but gradually I got the complete back catalog and the older material appealed to me more than the current records. So was, is and will be Master of Puppets (1986) will probably remain my all time favorite album. Even though I've heard the album an estimated a thousand times, it never gets boring! 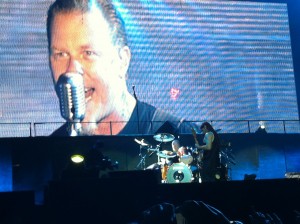 After a long break, the time had finally come: they (all approaching 50!) Pounded the very first recorded song of the band right at the beginning: Hit The Lights. The song that was also on the first LP Kill 'Em All appeared, was already on the compilation in advance in 1982 Metal massacre released. Immediately afterwards came the absolute Überersong: Master of Puppetsthat should not be missing at any concert of the band. Since the concert in Gelsenkirchen was now my ninth metallic concert, you are of course always particularly happy about surprises. Metallica are known for switching set lists from show to show (see below). The drummer Lars Ulrich is primarily responsible for the selection of songs, who goes to great lengths to select the songs: he compares the set lists of the last shows before the show (there are many fans who follow the band from concert to concert!) And also the last shows in the same place or in the vicinity of the last few years. This reduces repetitions and offers fans a lot of variety (apart from the must-have classics). So it was yesterday: with the third song The Shortest Straw they played a completely underrated song from the album And Justice For All (1988). Also the instrumental The Call Of Ktulu (1984) came as a big surprise. Metallica also threw the general structure of their setlists overboard: the last song has been the Mitgröhlhammer since 2004, almost without exception Seek and Destroy. Yesterday, however, it was already the fourth song, which perfected the start of the show. In addition to the songs that really seem to have been created for the stadium, The Memory Remains, Sad But True, One (which once again fascinated with an impressive pyro show), For Whom The Bell Tolls and Enter Sandman there were real blasts for the encore. After a short break, additional guitar and bass amplifiers and snare drums were brought onto the stage. Metallica came together with Megadeth and Anthrax on the stage (Slayer had to catch a flight) to get a song by Diamond Head to play: Helpless. Diamond Head belonged to one of the formative bands of the NWOBHM movement (New Wave Of British Heavy Metal, see above) and probably inspired all of the Big Four bands. James Herfield (Metallica) Arm in arm with Dave Mustaine (Megadeth, ex-Metallica, a lot of arguments!) - yes, that brought tears to the eyes of one or the other metalhead. Then there was Metallica Pur again with two of their absolute metal boards Battery and Creeping Death. [Complete setlist, photos and (soon) video here]

After a good five hours of metal we went home around 11 p.m. The neck hurt, the shirts were soaked with sweat and smelled of the beer flying around (drinks usually rarely stay in their mugs in the mosh pit) and the ears beeped. There are really no more signs of a successful, unforgettable day!

DerWesten reports on its website about "terrifying" scenes. Unfortunately I can confirm this. Not only is it not enough for a mini festival, where entry was possible from 3 p.m. and the end was not expected until after 11 p.m., to only offer two drink stands inside, it is also outrageous to only offer one (!) To set up a grill stand in the interior. As far as I could see, other meals could not be purchased. With the exception of a small area with Dixi toilets (far too few), it was not possible to leave the hall, as described in DerWesten. Gelsenkirchen apparently not only stands for bad football, but also for bad organization.

Since I am writing this blog post on the train ride from NRW to Berlin, I have a lot of time to do some research. As already mentioned, there are always different songs to be heard at every Metallica concert. The Big Four concert was my ninth after Berlin 2003, Graefenheinichen / Ferropolis 2003, Cologne 2003, Gelsenkirchen 2004, Rock Am Ring 2008, Berlin 2008, Oberhausen 2009 and Cologne 2009. The following table (57 different songs) contains many rarities that represent the one or other Metallica fan will probably be jealous: