How do spaceships avoid space waste?

Already now, heaps of junk are flying around in large parts of our earth orbit - at an altitude of 800 to 1000 kilometers. Space debris or flying rocks can destroy satellites and even go on a collision course with the earth. According to the European Space Agency ESA, around 1500 to 1600 satellites are currently orbiting the earth. As satellites can be manufactured more and more cheaply, many will be added in the coming years. And this also increases the risk of collision. Experts will be discussing this this week (January 22-24) at the Space Flight Control Center (Esoc) in Darmstadt.

What kind of waste is that supposed to be, you ask?

Countless parts of satellites that have collided with each other, disused espionage, earth observation or communication satellites that are spinning almost dead through space, rocket parts and even tools that astronauts dropped while tinkering around the International Space Station and which have since then made their orbits around the earth uncontrollably pull. Experts estimate that there are now more than 750,000 pieces of scrap, all larger than one centimeter.

Why is that bad?

Because the scrap parts can cause a lot. Even tiny projectiles have the effect of a bullet due to their speed - and are dangerous for active satellites, the space station and even rockets. If accidents like 2009 happen more often, it can be expensive. At that time, two large satellites crashed into each other - namely the active American Iridium 33 and the Russian inactive Cosmos 2251.

Lots of debris was created in the process. Again and again they collide, are thrown away, hit other parts and burst into many smaller pieces. It is precisely this chain reaction that space junk experts are afraid of. They call it "Kessler Syndrome": Collisions create ever new smaller particles until at some point so many junk particles are buzzing around the earth that we can no longer send satellites into space and space travel becomes impossible.

Can the scrap also fall to earth?

Yes, it happens again and again. The reason for this is that particles - when they collide - are slowed down. As a result, they can no longer maintain their orbit, sink and finally spin towards earth. So far, nobody has been injured, the risk is very low. ESA experts estimate that around 40 impacts occur somewhere in the world every year. But then they have to be larger pieces of scrap or they consist of extremely heat-resistant material, otherwise they burn up as soon as they enter the earth's atmosphere. We perceive this glowing up as a shooting star. 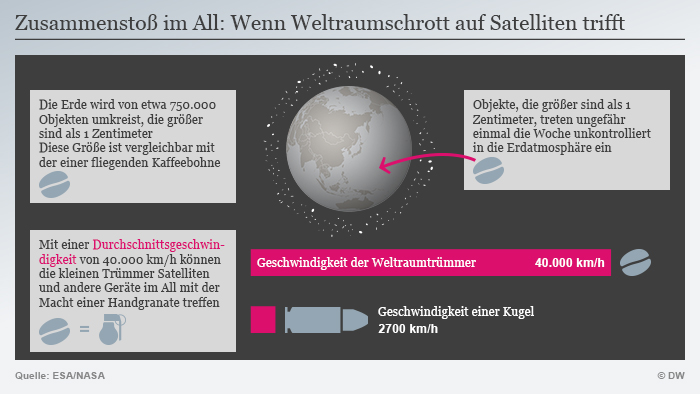 Is there a garbage disposal in space?

Not yet, but scientists are working to find solutions to how the space debris could be disposed of. In any case, the space states are aware that if the litter continues, there is a great risk to their billions of expensive satellites, rockets or space telescopes. Nevertheless, the willingness of the space nations to start serious garbage disposal missions is still quite low. But there are initial approaches and plans: Space junk and discarded satellites are to be captured or disposed of with the help of robots, networks, electromagnetic ropes or lasers.

Aha. Is it more precise?

For example, the European Space Agency ESA would like to develop a clean-up satellite. It is supposed to catch disused satellites with a net or a robotic arm and then sink into the atmosphere together with the scrap in a controlled manner and burn up there. The e.Deorbit is scheduled to start work in 2023.

Another idea, which is far from being realized, is to bombard scrap pieces with a laser from Earth or from space. This could change their trajectory in a targeted manner and cause them to burn up in the atmosphere. Or you slow them down with laser bombardment and they sink down until they finally burn up in the earth's atmosphere.

But what is already happening: Experts from the American Space Surveillance Network monitor scrap parts that are more than ten centimeters in diameter, they cannot see the smaller ones with their telescopes. Of the estimated 750,000 particles, that's just 23,000. If a piece of debris approaches the ISS or a satellite, they can briefly evade.