What is pyrolysis What is an example

Pyrolysis: Significance & use in biomass heating

Biomass heating uses wood chips or pellets for combustion. In addition to being used as fuel, biomass can also be converted into fuel gas. This process is called biomass or wood gasification. 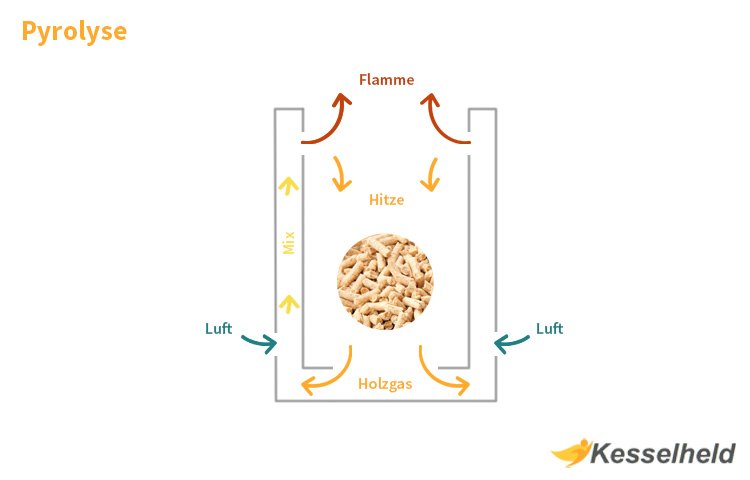 An essential part of the gasification process is pyrolysis, the functionality of which we will explain in detail below.

Pyrolysis initially describes combustion processes in which solid carbon remains. This is also known under the name of pyrolysis coke. By-products of the reaction are pyrolysis gases, which after oxidation, reduction and condensation form synthesis or fuel gas.

In general, gases and liquids are also formed in addition to solids. The proportions and compositions that occur during the process depend on the following factors:

Here, the required heat energy comes from the pyrolysis material itself. In the direct process, the raw material to be pyrolysed is heated by combustion gases. A closed container enables the reaction temperature to be influenced.

The indirect pyrolysis process takes place in a closed, externally heated room. An oxygen-free atmosphere is created in this to prevent the raw material from burning. This process is also known as smoldering. If necessary, dehydrating agents are also used during the process.

The smoldering combustion process was developed by Siemens in the 1990s to remove household and commercial waste by means of smoldering. However, this technology did not catch on when carbonization gas escaped from the large-scale facility in Fürth in 1998 and numerous residents complained of eye and skin irritation.

How does a pyrolysis oven work?

The graphic above shows the structure of a fixed bed gasifier using the countercurrent process. This uses the pyrolysis process for biomass gasification.

Firewood in the form of wood chips or pellets is fed into the chamber and ignited there. A fan supplies the combustion with oxygen, while a fume cupboard extracts the resulting product gas. The lower layer of the wood chips burns slowly and heats the layers of wood above. The biomass in the boiler evaporates and pyrolysis gases are produced. Due to their high volatility, oxidation and reduction are also required.

Other areas of application

The manufacturer Bosch uses pyrolysis for the product series 8. This includes ovens that use pyrolysis processes for self-cleaning. As the oven heats up to 480 degrees, fat and food residues are almost completely burned off.

The production of charcoal also uses pyrolysis. So-called smoldering removes moisture from the wood. The biological substances are heated to 400 to 600 degrees in a pyrolysis chamber.

The breaking of the long-chain carbon bonds creates biochar and synthesis gas. This is burned in a fuel gas and is considered a waste product in the production of charcoal.