Volcanic eruptions relax the stress of the tectonic plate

Hardly a cloud clouds the sky over Germany, far and wide no contrail from an airplane: What sun worshipers may enjoy is slowly but surely growing into a huge problem for European aviation. Because every hour that your fleet is forced to spend on the ground costs you millions - companies lose at least 100 million euros per day, estimates the Association of European Airlines. The first bankruptcies are already looming if the airspace is closed because of the volcanic ash.

But the volcano's ash cloud doesn't seem to be visible either: it is there, as atmospheric researcher Thomas Peter from ETH Zurich confirms. "It is very difficult to perceive these aerosols with the naked eye because their concentration is very low. And they are very small: we are talking about particle diameters that are in the range of a thousandth of a millimeter." Only when the light conditions change in the morning or evening does Eyjafjallajökull's sputum also become visible here on land: It produces a more intense evening and morning red because it scatters the light differently than normal air particles.

Peter and his colleagues can also fall back on very sensitive measuring devices, some of which were in continuous use during the weekend. The researchers sent several weather balloons equipped with sensors into the Swiss sky up to an altitude of 30 kilometers. "We wanted to know how many aerosols there are in the various air layers. At the same time, we measure how humid these atmospheric areas are, because that also allows us to draw conclusions about the amount and type of aerosols," explains Peter. Her LIDAR system has been measuring since Friday (light detection and ranging)the removal of the aerosols and thus their height by sending a laser beam to an altitude of up to 15 kilometers and absorbing the light reflected from the atmosphere. In addition, a measuring aircraft flew twice through the ash layer.

Hardly visible, but there

The result: the volcanic cloud continues to lie over Switzerland and therefore certainly over neighboring countries as well. "We were able to determine a particularly high proportion of volcano aerosols at an altitude of between four and five kilometers," says Peter. In the course of the night from Friday to Saturday the shift sank, but it didn't disappear from the air: "Since Sunday noon, the signal in the lower layers up to five and six kilometers in height has more or less lost. We don't have any clear signals More evidence that there are still volcanic aerosols. Using LIDAR, however, we have been able to clearly see in the last few hours that a very pronounced volcanic aerosol layer is floating at a height of eight kilometers. "

The moisture content of the air provides an indication of this: the higher it is, the larger the aerosols are in the corresponding layer and the more the view is clouded and the LIDAR light is backscattered. In the area of ​​the ash cloud, however, the atmosphere is very dry, which is why it should actually be low in particles - unless it has been "loaded" by a volcano. However, the measurements made so far have one major shortcoming, says Thomas Peter: "We do not yet know exactly how much dust is on the way. We are working on that. But even if this is certain: which turbine specialist can say which quantities an engine can handle without problems and which not ? "

Despite these findings, the aviation managers increasingly doubt the sense of the lock, which in their opinion is based too much on computer simulations by the British weather service. During the weekend, some of their planes were allowed to fly with a special permit without any problems: Afterwards there were no particles from the volcano either in the turbines or on specially attached adhesive films. So far, however, the authorities have refused to accept companies' requests to lift the ban, because - where present - the ashes represent a major security risk.

"This is not normal dust like from road debris or desert storms, but tiny glass particles with a low melting point. They form when they break out due to the sudden cooling and are melted again in the hot jet engine - this is unique," explains the Zurich scientist. The melt droplets then deposit on the rotor blades and walls and coat them. In contrast to a speck of dust from the desert, which may cause some mechanical abrasion, deposits form, which can limit the function. In the worst case, they damage an engine so severely that it no longer works.

The authorities are also receiving support from the Leibniz Institute for Tropospheric Research in Leipzig, which was also able to detect the ashes in the atmosphere - albeit with a downward trend over the weekend. In doing so, the researchers also object to allegations that measurements are not carried out here on land. "It is misleading the public when some airlines claim that there is no volcanic ash in the troposphere and, above all, that there are no measurements. The closure of the airspace is by no means based solely on model simulations," the institute said in a statement.

Waiting for the one flight

All eyes are now looking forward to a measurement flight by the German Aerospace Center (DLR) in Oberpfaffenhofen, which should take place on Monday afternoon. The technicians and scientists at DLR worked feverishly all weekend to equip an aircraft with the necessary instruments. Because of the special situation, Jan Wörner, the chairman of the DLR board, asked for understanding in his blog: "Such a measurement flight is anything but routine work." In addition to the technical renovation work, the flight must ultimately also be approved by the Federal Aviation Office.

If everything goes according to plan, the deployed Falcon 20E should complete a flight through German airspace, says Andreas Schütz from DLR: "Our specially trained pilot flies from the south to central Germany and then perhaps west before returning south. He always decides depending on the air situation, where and at what heights it is flying and where you can get the best measurement results. " The data is then evaluated immediately after landing. You alone do not decide whether and when the airspace will be released again: "We provide additional information for assessing the situation, but other bodies have to decide."

At the same time, the eyes are directed towards Iceland, because Eyjafjallajökull's eruptions also determine when the situation over Europe eases. "At the moment there is little activity on the surface. And at least yesterday the volcano's cloud was quite small: it was not visible on the weather radar from Keflavík Airport near Reykjavík," says Björn Hannes Mattsson from ETH Zurich, explaining the situation on the Atlantic island. But Eyjafyoll, as the fire mountain is actually called (Eyjafjallajökull is the name of the former glacier above), is still a long way off: "The seismic activity in the depths increases - an indication that magma is moving Outbreaks continue and are therefore difficult to hit. " After all, the cloud "only" rose to heights of a maximum of three kilometers on Sunday - long-distance transport to Europe was therefore canceled. And no ash rain was reported from the island itself.

There are two main things that make the volcanologists' prognoses difficult: On the one hand, they cannot assess how much meltwater flows into the crater, which has a major impact on the severity of the explosions. On the other hand, they do not yet know exactly how the magma is composed, says Mattsson: "If rhyolithic, i.e. acidic and viscous magma are increasingly involved, there could be more intense eruptions - and higher clouds of ash." This is supported by observations from the neighboring volcanoes around the Eyjafyoll, in whose craters domes have formed. "If the magmatic system develops in this direction, the eruptions can continue for a long time," estimates Mattsson.

Hope for a change in the weather

Katla, the volcano directly next to it, also plays a kind of joker role and always stirred when Eyjafyoll erupted. Still nothing speaks for its awakening, but that doesn't mean anything, says Mattsson: "Until yesterday there were no signs of magma movements below Katla. But the latest eruption started on the ridge between the two volcanoes. It is therefore very likely that Katla will also become active . "

A change in the weather would also help the Europeans, because the current constellation with a high over Germany and a low over Scandinavia continues to drive ash to us with the prevailing winds from the northwest. "We need a proper low pressure system that would wash out all of Europe. After that, the air would be clean again," says Thomas Peter. As beautiful as the sun is shining at the moment, the desire for rain is likely to be widespread these days. 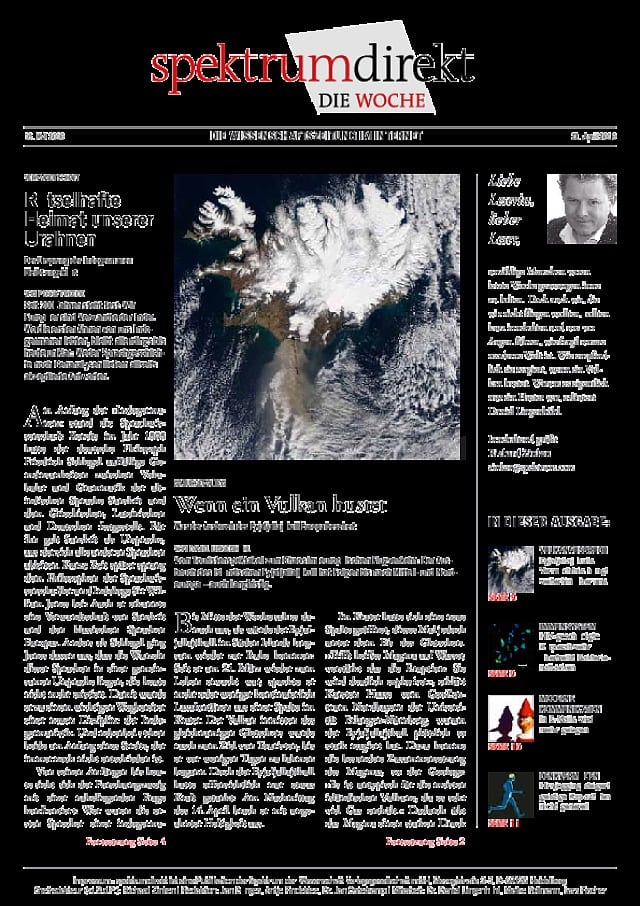