Nagato is an orphan from Amegakure, member of the Uzumaki clan and owns the powerful Dōjutsu Rinnegan. He created the figure of Pain, with whose six bodies he appears in public. As a pain, he appears as the head of Amegakure and is worshiped there by the inhabitants because of his strength as a god. Nagato himself also presents himself as a god, believing that he has grown so much through the suffering in his childhood and youth that he has developed into a god.[1][2] At the same time he is an important member of the Akatsuki organization. There, too, he only appears with his six bodies and is referred to as the leader by all members except his team member Konan. According to Konan's statement, Pain has never lost a fight.[3] Like Nagato, all body pains have the Rinnegan.

The three orphans are trained by Jiraiya

Nagato is a quiet orphan from Amegakure whose parents were killed by Konoha-Nin. After the death of his parents, Nagato meets a dog whom he names Chibi. They travel on together, always looking for something to eat. One day they are found by Konan. Since Nagato can no longer walk because of hunger, she gives him a loaf of bread. Nagato then shares it with his dog. After the two of them have eaten, Konan takes them to see Yahiko. He and Konan are also orphans. The three move on together. On their journey, Chibi is killed by a kunai prepared with a kibakufuda. After Chibi is buried, the three orphans move on. They help each other as best they can, with Yahiko taking special care of the other two, for example by stealing food for them.[4] Nagato is very impressed with Yahiko's will and views. He then also wants to give everything to protect his friends.[5] Nagato believes that there can only be peace if all people experience the same suffering as them. By realizing this suffering, all human beings would loathe war as much as they do and seek other solutions to problems.[6] On their escape from the war, the three orphans meet the legendary Sannin. Since Jiraiya as Konoha-Nin feels responsible for the misery of the children, he takes them into his care and looks after them.[7]

One day Nagato and Yahiko are attacked by a chunin from Iwagakure. However, the attacker is already dead when Jiraiya arrives at the battlefield because Nagato has killed him with the help of his Rinnegans.[8] Following this incident, Jiraiya trains the three children and trains them to be ninja. After three years of training they are able to defeat one of Jiraiya's shadow doubles, which means that the training is over.[9]

After this time, Jiraiya hears fragmentary stories about the three. So it seems that everyone who messed with them was killed.[10] 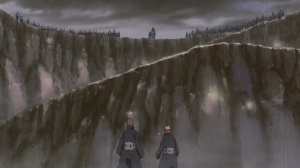 Driven by Yahiko's desire, Nagato later wages a civil war as leader of a splinter group against the then leader of Amegakure, Hanzo. However, Hanzo made a peace treaty with the group of Yahiko and Nagato during the civil war. The two are supposed to meet at a place where Hanzo would eventually wait for them. When they get there, they are expected by Hanzo and his followers, as well as the Anbu unit from Danzo. As it turned out, this meeting was just an excuse to lure Yahiko and Nagato into a trap.

The reason for this is that Hanzo feared that the group could rise up and lose his position as a result. He has brought Konan under his control and gives Nagato the choice between her and Yahiko. Should Nagato not consent to kill Yahiko at his own hand, it would have fatal consequences for Konan. Yahiko tells Nagato to kill him. Nagato hesitates when he holds the kunai in his hand. Finally, Yahiko snatches the gun from his partner and rams it into his chest. At the end of the war, Nagato kills Hanzo, his entire family and friends, as well as his allies and their children.[11] According to the residents, he is already fighting the fight as a pain and no longer as Nagato.

Since then, Pain has been the leader of the city himself, where he is worshiped as a god by all residents.[12] He completely separates the village from the rest of the world and constantly monitors entry and exit in the village using his Ukojizai no Jutsu, a technique in which he can feel the chakra of everyone in it with the help of rain. [13][14] 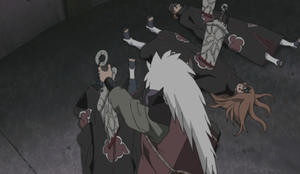 Jiraiya appears in Amegakure shortly after Tobi ordered Pain to catch the Kyūbi. Jiraiya first meets Konan there, who tries to stop him until Pain arrives, whereby she is clearly inferior to Jiraiya alone. When Ningerso appears, he first talks to Jiraiya about his goals with Akatsuki.

Jiraiya tries to dissuade Pain from his plan. At first, Pain only fights with one body and therefore only has incantations available. However, when Jiraiya switches to hermit mode and gains the upper hand in the fight, Pain calls out two more bodies. After he is still inferior with this reinforcement, he fights against Jiraiya with all six bodies.

When Jiraiya discovers Pain's secret, however, he is already so weakened that he is ultimately killed by Pain. Shortly before, Chikushōdō was killed by Jiraiya and sent to Konoha in a toad. Jiraiya's last action is to transmit an encrypted message on Fukasaku's back to Tsunade. After the fight, Pain tells Zetsu that he would not have had a chance against Jiraiya if he had found out his secret earlier. 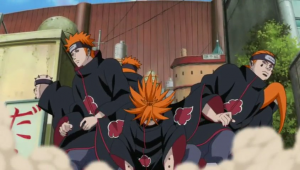 After the fight against Jiraiya, Pain and Konan make their way to Konoha to catch the Kyūbi's Jinchūriki, Naruto. His individual bodies try to find out where Naruto is in one-on-one fights. He also meets Kakashi, who tries to stop him until reinforcements arrive and thus save Iruka's life. 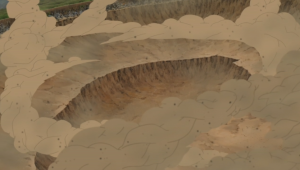 After Kakashi with his Raiton: Kage Bunshin the body Shuradō can hit, he is badly hit by Chōza Akimichi, but can later take a fatal Chidori blow to the body Tendo intercept by throwing himself between them. However, this blow does not seem to kill him for good either. Chōza is hit badly by Pain shortly afterwards, the trapped Kakashi only manages to repel a deadly projectile destined for Chōji with the help of his Mangekyō Sharingan.

Only after penetrating Shizune's mind does Pain finally find out that Naruto is in Myōbokuzan to train there. Then he destroyed all of Konoha with a larger form of the Shinra Tensei. 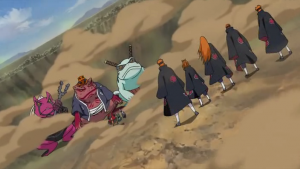 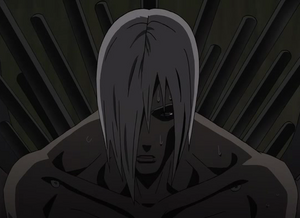 Naruto, who is summoned to Konoha shortly after the destruction by the Shinra Tensei, begins to fight against Pain and manages to incapacitate or even kill several bodies, so that only the god body is now capable of fighting. He manages to pierce Naruto's hands with a black stick so that he is pinned to the ground. Now Pain tells Naruto why he wants to cause all the pain. However, Naruto manages to defeat Pain. He then finds Nagato and Konan in their hiding place.

After he and Naruto found a solution to the endless suffering, he applied the Gedō - Rinne Tensei no Jutsu. A jutsu that costs a lot of chakra, too much for Nagato's remaining. He dies hoping that Naruto can finally bring peace to his world. Konan emphasized how extraordinary it was that a child could change Nagato's mind so much. She took the bodies of Nagato and Yahiko with her.

Detailed description of the fight: See here
Like the other deceased members of Akatsuki, Nagato is summoned by Kabuto Yakushi through Kuchiyose: Edo Tensei. He and Itachi are near the battlefield where they meet Killer B and Naruto and a fight between the four ninja begins. In the course of the fight, Nagato summons a dog and a bird. All three go up in the flames of Itachis Amaterasu. Nagato is able to free himself from it with Shinra Tensei and goes for Killer B, who switches to Biju mode and counters Nagato's attack. Nagato, however, absorbs B's chakra and attains a younger, stronger body. Then he tries to pull Naruto's soul out of his body, but Itachi intervenes with his Susanoo and can thus save the two Jinchūriki. Nagato then uses Chibaku Tensei, which, however, is destroyed by a joint attack by Naruto, Bs and Itachi. In the ensuing mess, Susanoo penetrates Nagato's host body with the Totsuka no Tsurugi, which heralds its end. Nagato tells Naruto that he should now complete the third part of Jiraiya's trilogy after the first part was labeled Jiraiya and Nagato had beaten the second part. Naruto returns the words with a silent gesture and Nagato is sealed in a genjutsu. 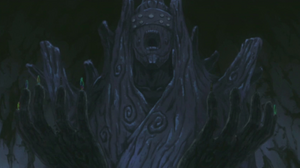 Pain conjures up the statue in which the biju are sealed

Pain is considered to be the leader of Akatsuki, even if not he, but Tobi founded Akatsuki.[15] All Akatsuki members, except for his partner Konan, address him with the title of leader. However, he takes his instructions from Tobi himself, who says he is Madara.[16] Pain also conjures up the statue in which the biju are sealed.

With the help of Akatsuki, he wants to destroy the current world order, which in his opinion is dominated by violence and suffering. To do this, he wants to use the bijū to create a powerful jutsu through which the whole world will learn what true pain and suffering really mean. Pain believes that recognizing suffering and the resulting desire to stop it at its roots make people grow faster. Thus, in his opinion, a world without suffering can be created.[17] These views are essentially the same as those of Yahiko.

The six paths of pain 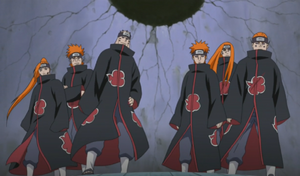 "The Six Paths of Pain"

Nagato controls the six different body pain that the Rinnegan possesses. One of the bodies looks very similar to Yahiko, Nagato's childhood friend. Pain tells Jiraiya that he died a few years ago.[18][19] The individual bodies act separately from each other, so they can definitely be distinguished from simple doppelgangers. However, the Rinnegan's field of vision of the individual bodies is expanded to include that of all others, which makes a fight against all bodies at the same time very difficult.[20]

At the end of the fight, Jiraiya seems to have discovered the secret of the six paths of pain that none of the individual bodies is a separate person. Before his death he can still have a coded message on Fukasaku's back with the contents "The real one is not among them", or. "There is no real one" send back to Konoha with a body he killed.[21] As it turns out later, the real Nagato is mostly at an elevated point near his body. In this case, a paper tree that Konan created. From there he controls his body with the help of the implanted chakra receptors.[22]

In the body killed by Jiraiya, the piercings on the face and all over the body are removed by Oyone and Kumadori during the autopsy. When Pain attacks Konoha, the piercings become warm and appear to receive chakra. Tsunade suggests that these could be chakra receivers through which the individual bodies are controlled or are networked with one another.[23] Naruto can later confirm this assumption in hermit mode by injuring himself with one of the recipients and thus feeling the Nagatos chakra himself.[24]

In the fight against Pain, Jiraiya notices that all the bodies he controls are shinobi, which he fought a long time ago.[25] Nagato therefore makes use of the bodies of deceased people. Each of the bodies has its own capabilities, although it can only use this one type of ability.[26]

Nagato's properties are described in the companion books as follows: