What was the name of the Persian law 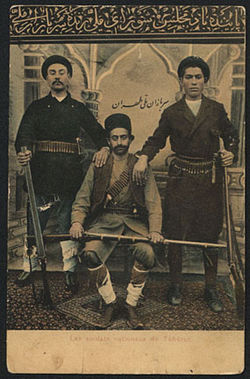 The Persian Constitution of 1906 (Persian: قانون اساسی مشروطه, Qanun-e Asasi-ye Mishirutâh ) was the first constitution of the sublime state of Persia (Qajar Iran) resulting from the Persian constitutional revolution emerged and was written by Hassan Pirnia, Hossein Pirnia and Ismail Mumtaz among others. It is divided into five chapters with many articles that have developed over several years. The Koran was the basis of this constitution, while the Belgian constitution served as a partial model for the document.

The electoral and constitutional laws of 1906

The electoral and constitutional laws of 1906 established the electoral system and the internal framework of the majlis (parliament) and the senate.

With the royal proclamation of August 5, 1906, Mozzafar al-Din Shah created this first constitution "for the peace and tranquility of all people in Persia". Chapters 4 and 5 are ascribed to Muhammad Ali Shah Qajar.

The electoral law of September 9, 1906 laid down the provisions for the elections to the Majlis.

Article 3 of this chapter states: (1) women, (2) foreigners, (3) persons under the age of 25, (4) "persons notorious for mischievous opinions", (5) persons with a criminal record, (6) active military personnel and some other groups are not allowed to vote.

Article 4 states that the elected must (1) read and write completely in Persian, (2) "they must be Iranian subjects of Iranian origin", (3) "be locally known", (4) "not in state Employment ", (5) being between 30 and 70 years of age, and (6)" having an understanding of government affairs ".

Article 7 says: "Every voter has one vote and can only vote in one [social] class."

The basic laws of December 30, 1906 defined the role of the majlis in the system and in its framework. A bicameral legislature was also defined. Article 1 established the National Consultative Assembly on the basis of "justice". Article 43 states: "Another assembly called the Senate shall be formed."

The supplementary basic laws of October 7, 1907

With the supplementary basic laws of October 7, 1907, the Charter of Rights and the overall system of governance were established.

Articles 1 and 2 of the Laws established Islam as the official religion of Persia / Iran and stipulated that all laws of the nation must be approved by a committee of Shiite clergy. Later these two articles were mainly ignored by the Pahlavis, sometimes causing anger and revolt from clergy and religious masses: (See: Pahlavis and Non-Islamic Politics)

Articles 3 to 7 of the General Regulations discuss the logistics of the borders, flag specifications and Tehran as the capital of the country. They also address the property rights of foreign nationals in Iran, as well as the inability to override the principles of the constitution.

Rights of the Iranian nation

Articles 8 to 25 of the "Rights of the Iranian Nation" discuss a number of rights inherent in all Iranian citizens. These rights include personal and property rights as well as freedom of expression and censorship. They briefly discuss the rights of citizenship and freedom of movement within the country.

Forces of the Empire

This section of the supplementary basic laws of October 7, 1907 begins with the following information:

The powers of the empire are all derived from the people; and the Basic Law regulates the use of these powers.

Article 27 discussed the three categories into which empire power is divided:

First, the legislative power specifically concerned with drafting or improving laws. This authority derives from His Imperial Majesty, the National Consultative Assembly, and the Senate, three sources each of which have the right to enact laws, provided that their survival depends on them not being in conflict with the standards of canon law and his Approval by the members of the two assemblies and the royal ratification. However, the enactment and approval of laws relating to the revenue and expenditure of the kingdom are specifically entrusted to the National Consultative Assembly. The explanation and interpretation of the law is also one of the special functions of the above-mentioned assembly.

Third, the executive power that belongs to the King, that is, the laws and ordinances, will be carried out by the ministers and civil servants in August on behalf of his Imperial Majesty in such a way as the law defines.

The remaining articles contain a permanent distinction between the three powers and their relativity in each province, department, and district.

This section contains the roles of the National Consultative Assembly and the Senate and the provisions governing membership in both branches of government.

Rights of the Persian throne

In the Rights of the Persian Throne, the section begins with several articles describing the duties of the Shah and the logistics of the throne. This includes the process of succession to the throne, ascension to the throne and dealing with instances such as death.

The Shah's duties, such as the appointment and dismissal of ministers and the granting of military rank, distinction and other honorary decorations, are also discussed. The Shah also commands the military and has the final say on whether or not to wage war.

This section concludes in Article 57 by underlining the exact level of power the Shah receives by saying:

. The royal prerogatives and powers are only those expressly mentioned in the present constitutional law.

Articles 58-70 comment on the duties and laws relating to ministers. This section also helps identify the specific roles ministers play in government.

Several articles specifically talk about how ministers are appointed and how they are held accountable for their arrears.

Powers of the Tribunal of Justice

This section begins by specifying the purpose for the Ministry of Justice in Article 71:

Articles 72 to 82 also discuss the instructions for dealing with public disputes and investigations, as well as the legal aspects of enforcement in relation to violations of the law. Several articles set out the rules for all court proceedings, stating that they must be public and that all decisions must be based on common sense and supported by legal evidence.

Articles 83-89 address the issue of appointment in relation to the prosecutor and members of the judicial courts and explain what is in line with the established laws.

This section discusses the various provincial and departmental councils and sets out the special arrangements for the various branches.

The basic laws governing these assemblies include the election of the members of the provincial and departmental councils, the oversight of all reforms associated with public benefit, and the spending obligations of each council.

The rules and administration of finances are set out in Articles 94-103. These articles include laws on taxes, tax exemptions, the established budget approval laws, as well as the role of the finance commission.

The finance commission has the following tasks:

The section closes with the idea that the establishment and organization of the Finance Commission must be in accordance with the law.

The last section of the supplementary basic laws of October 7, 1907 is the army. This section describes all elements of troop recruitment, the duties and rights of the military, and the advancement of military personnel. It also discusses the budget of the military, which is determined each year by the National Consultative Assembly, and the rights of military personnel.

The supplementary basic laws of October 7, 1907 conclude with the following statements:

"In the name of God he is blessed and exalted."

"The supplementary provisions of the Basic Law have been read and are correct. Please God, our royal person will observe and consider them all. Our sons and successors will also, please God, affirm these sacred laws and principles.

The law only says that the laws must not be against Islam, but not that the laws have to be Islamic. Laws can indeed be un-Islamic and not in conflict with any particular Islamic law. The constitutional revolution had a role in suppressing the power held by the clergy and religion. The revolution gave rights to minorities such as Zoroastrians, Christians and Jews.