How are macromolecular conformational changes measured

Intensive interaction of proteins with other macromolecules can have important properties of proteins such as: B. significantly change the translational mobility or the state of conformation. Hence, the study of proteins in macromolecular environments that typically closely approximate physiological conditions or cell-like environments is of great interest. In principle, confocal fluorescence microscopy enables the selective analysis of selected proteins in such environments. However, some methodological difficulties and metrological artifacts must be taken into account or circumvented in order to characterize the proteins reliably and quantitatively.

The majority of our knowledge in the field of protein biochemistry comes from experiments with proteins that are highly diluted in buffer solutions with concentrations of a few grams per liter. However, these conditions are very different from those found in living cells. The cellular cytoplasm is enriched with many different macromolecules. These can account for up to 20% of the cell volume, so that there is a concentration of a few hundred grams per liter (“molecular crowding”). The resulting excluded volume effect can lead to increased effective concentrations of the cellular proteins and change essential physical properties of the solution. So in the cytosol in these limited volumes z. B. decreases the molecular mobility and dynamics of proteins. Possible consequences of “molecular crowding” are reduced diffusion rates, shifts in protein-protein or protein-substrate association equilibria, and changes in the conformational dynamics of individual proteins [1]. Confocal fluorescence microscopy can provide very detailed information for proteins in such environmental conditions. In addition to measurements directly in living cells, which are technically complex and typically do not provide the data quality like in vitro measurements, cell-like environmental conditions can also be imitated by non-biological macromolecules (e.g. PEG, Ficoll). In all of these cases with a higher concentration of macromolecular crowd, due to increased refractive indices of the solution and due to molecular collisions of the crowd molecules, potential artifacts must be expected in a quantitative data analysis. 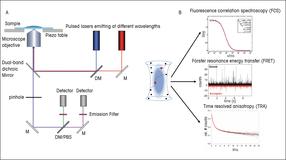 Fig.1 Schematic setup of a confocal fluorescence microscope with simultaneous two-channel detection (A). The fluorescence emission light can be split into two different colors for FRET applications using a dichroic mirror or into two polarization directions for TRA applications using a polarization beam splitter. In addition, auto- and cross-correlations (FCS) can be carried out with the signals from the detection channels (B).

In confocal fluorescence detection, the excitation light is focused on a small, diffraction-limited volume in the protein solution. An optimal information content regarding the measurement with freely diffusing proteins can be obtained with a so-called fluorescence multiparameter analysis. Pulsed laser light excitation and simultaneous two-channel fluorescence detection are used (see Fig. 1 and [2]). The following three methods are most commonly used to characterize protein properties. (i) Fluorescence correlation spectroscopy (FCS) provides detailed information about the protein concentration in the measurement solution and about the translational diffusion of the proteins. (ii) Förster Resonance Energy Transfer (FRET) can be used to study bimolecular bonds between interaction partners. In addition, with suitable dye labeling, protein conformations and changes in conformation can be followed. (iii) The time-resolved fluorescence anisotropy (TRA) makes it possible to determine the rotational movement of the proteins within a certain time window. All of these parameters and their variation through macromolecular environments play an important role in intermolecular interactions, such as those that occur in enzymatics or in biological signal processing.

Fig. 2 The dependence of the diffusion coefficient on the viscosity of a macromolecular solution (Crowder: Ficoll70) for different Crowder concentrations is shown for a protein (streptavidin). It can be seen here that the measured data cannot be described using the Stokes-Einstein equation (A). For fluorescent dyes that are bound to specific positions in the protein (B), the quantum yield can vary depending on the position (e.g. amino acid 202 or 256) or with a different protein environment. Measurement data for determining the quantum yields (see [5]) and the resulting values ​​are given in Fig. C.

A phenomenon of a highly concentrated macromolecular solution that has been well known for a long time is the increased viscosity compared to pure buffer solutions. This increased viscosity leads to a reduced translation diffusion coefficient. In a qualitatively similar form, the rotational mobility of the dissolved proteins in macromolecular solutions also decreases. Both effects can be examined well with the FCS or the time-resolved fluorescence anisotropy (see Fig. 2, 3). A quantitative description of the translational movement as a function of the viscosity (h) is given by the Stokes-Einstein equation (see Fig. 2) and by the Stokes-Einstein-Debye equation for rotational movements (~ 1 / h). Typically, the viscosity of the macromolecular solutions is measured with a falling ball viscometer and used in the above equations to describe the diffusion behavior. Interestingly, the diffusion values ​​determined by fluorescence measurements show a strong deviation from the behavior given by the equations (Fig. 2, 3). The reason for this is given by the fact that the effective viscosity for a diffusing protein depends on the size of the macromolecular crowder. On closer inspection, one even finds that the size ratio of the diffusing protein and the surrounding crowder is essentially the relevant parameter. A similar behavior can also be observed with regard to the rotational diffusion. In addition, there are indications that the rigidity of the crowder (i.e. flexible or rigid compact macromolecule) and the shape of the diffusing proteins also have an influence on protein diffusion. All of these diffusion properties can potentially have a direct influence on association rates and thus on intermolecular bonds between interaction partners in cellular processes.

In further examples, we used fluorescence anisotropy measurements to characterize the rotational mobility of proteins produced in cell-free synthesis. The focus of this study was a comparison of the proteins or polypeptide chains that were still bound to the ribosome immediately after synthesis with those whose peptide chain was already separated from the ribosome [6]. Here, too, frequent molecular collisions, in this case between the polypeptide chain and the ribosome, play a central role. These impacts significantly reduce the rotational mobility of the protein and also have an influence on the co-translational protein folding, which begins with the incompletely synthesized nascent polypeptide chain bound to the ribosome.