Vaccine patents belong to pharmaceutical companies. Without them, production facilities around the world could produce larger quantities. 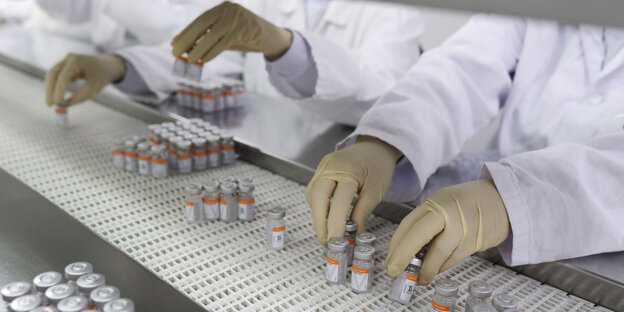 There are different types of mass murder. One is called a "patent". In a world of extreme social differences, patents decide who is allowed to survive. That is why those who repeatedly prevent the patent rights for Covid-19 drugs, vaccines and medical products from being suspended in a global pandemic have blood on their hands. This is not an exaggeration, it is deadly serious.

In March, for the eighth (!) Time, the European Union blocked a relevant non-profit proposal from the governments of India and South Africa to the World Trade Organization, in unison with the USA and Great Britain. Instead, the member states agreed to deal with the issue again in mid-April. While we complain about the lack of deliveries in this country, the people in every second country on earth have received almost no vaccinations.

The reason for this is that the vaccines belong to the pharmaceutical companies. Even within capitalist logic, this is unfair, because in most cases their development is only made possible by decades of public funding. The vaccines from the companies Biontech / Pfizer and Moderna are based on fundamental discoveries that have been made with government support at university research centers.

For example the essential RNA modification (hence the name “Moderna”: “Modified” + “RNA”), which was developed at the University of Pennsylvania. In addition to such basic research, the public sector has invested an additional 93 billion euros worldwide in the development of vaccinations. “This vaccine belongs to the people,” demanded Peter Maybarduk, Head of Access to Medicines at Public Citizen in the magazine Scientific American.

“Publicly paid scientists invented it, the taxpayers financed its development. It should be the property of all mankind. ”In addition, the pharmaceutical patents ensure an artificial and thus profitable shortage of quantities. How much more could be produced if production facilities around the world were now given the green light? Instead, there is a private-sector expropriation of social assets - with the help of the state and thus as an assault by state capital.

The expected profits will be gigantic, because the corporations have agreed to cap prices only as long as the pandemic lasts. But you have made a commitment to decide for yourself when this will be over. Some of them have indicated that the closed season will end by the end of this year at the latest. An American friend recently wrote to me saying how grateful his parents were to have received the vaccination for free.

“But you've already paid for the damned stuff anyway,” he replied, “so you're grateful not to have to pay for it twice.” So, to take note, for all those without hearts and minds who maintain this inhuman system: ALL of us belongs to the vaccine and it is in EVERYONE's interest that EVERYONE worldwide is vaccinated, so there is only one sensible and ethical policy: vaccine as a common good, free of charge worldwide or distributed at cost price.

Lo and behold, that's exactly what Ursula von der Leyen asked last April. The vaccine must be converted into a global commons to ensure fair distribution. Probably this was before lobbyists and industrialists explained behind closed doors to those responsible whom they really had to serve (tip: not society).

Before someone shouts out, as usual, that the whole thing is not so simple and also much more complex, that he or she should be allowed to face a number of other logistical and technical challenges. That is why the often maligned World Health Organization set up a technology pool last year. The aim is to share the necessary know-how with manufacturers in poor countries (India in particular has considerable capacities).

Saving lives is not enough as motivation

Not a single vaccine manufacturer has participated so far. The corporations don't want to, and who can force them to? Apparently there are good reasons for this. Softening intellectual property weakens future innovations. You have to let that melt in your ears. Saving human lives and alleviating suffering is not enough to motivate research! What good are the instruments of a system if they only invest in the future and life when juicy dividends are tempting?

This question is hardly discussed in the media at the moment. Instead, tourists are interviewed on television before their flight to Mallorca. A young woman explains that she really has to travel because she “doesn't want to miss her life”.

Apart from the sad fact that some people only think they are alive when they fly to Malle, the question arises whether it is not rather those who miss their lives who die tomorrow and the day after without a vaccination, mostly without knowing how easy it is could have been saved - with an act of humanity.

At the beginning of this pandemic, there were justified hopes that the crisis could lead to pausing and rethinking - away from greed and profit, towards solidarity that is essential for survival. This hope has been dashed. In the past, nationalists demanded a place in the sun, today they reserve a place by the syringe. While we may soon be lulled into immunity, billions will go away empty-handed. An all-round smart solution.