As you can see, sound travels around four times as fast in water as it does in air. In wood, sound is around 16 times faster than in air.

When sound hits a solid object, e.g. a rock wall, the sound becomes reflected - he comes back and the sound can be heard again (a little quieter). The reflected sound is called echo designated.

Since we now have the Speed ​​of sound know, the distance to the rock face can be determined from the time between the emission of the sound and the arrival of the echo:

How far is a rock wall if the echo can be heard 6 seconds after the sound signal is sent out?

So the distance to the rock face is 1 kilometer.

Echoes are generated in this way echo sounder used to determine sea depths: A ship becomes a Ultrasonic signal (Ultrasonic is sound that we cannot hear) emitted towards the sea floor and received again with an echo receiver. A measuring device is used to measure the exact time between sending and receiving the sound signal, and from this the depth of the sea is calculated.

Many animals orient themselves through echolocation 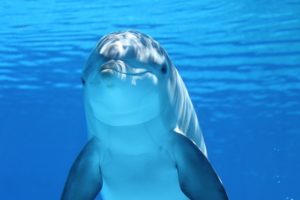 Dolphins orient themselves with the help of sound

Different animals orient themselves by sending out sound signals that are reflected by obstacles and received again.

For example, send Dolphins Clicks and whistles, but also inaudible to us Ultrasonic out.

Also Bats orient themselves in the dark with the help of ultrasonic signals.