How do prisoners get guns?

Violence in Ecuador's Prisons: How Did Guns Get Into Jail?

At least 79 prisoners die in outbreaks of violence in Ecuadorian prisons. The police play a questionable role in the penal system. 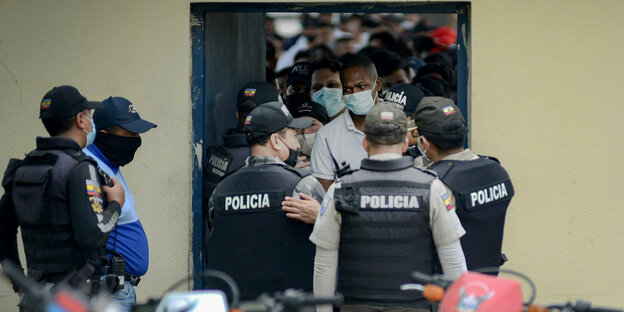 Police operation in Guayaquil prison after the outbreak of violence Photo: dpa

This was announced by the prison administration of the South American country on Wednesday morning. According to the authorities, the bloody revolts at the same time can be traced back to rivalries between drug gangs operating inside the prisons.

In a previous interim balance sheet by the prison authorities, there were still 62 dead. It can be assumed that more dead will be found. According to the head of the authorities, Edmundo Moncayo, there were no deaths among the guards. But several police officers were injured. In the meantime, soldiers have been posted in front of the detention centers and roadblocks have been set up.

Violent clashes occur again and again in Ecuadorian prisons. According to official figures, 51 inmates were killed in the last year alone.

Without the knowledge of the police, smuggling is hardly conceivable

Security forces blame rival gangs for the violence in detention centers. Most of the time, however, the background remains in the dark. Although the Moreno government ordered the militarization of prisons in the face of an initial wave of violence in May 2019, control of the prisons seems to have largely slipped away. The current outbreak of violence is therefore only the culmination of a development that began about two years ago.

However, the police are responsible for checking the entrance to the prisons. Anyone who visits the prison in Latacunga as a lawyer is screened by a body scanner and has to have files and shoes X-rayed. It's hard to imagine how the guns, phones and drugs found got into the prisons without the knowledge of the police. Machetes and chainsaws were used in the massacre on Tuesday.

After the waves of violence in recent years, the police were repeatedly accused of controlling the outbreaks of violence in order to control the gangs through targeted executions of individual leaders.

The transition between police and criminals is fluid

Prison guards said that when the Choneros leader was beheaded in June 2019, the police left the doors to the neighboring wing open, allowing the rival gang to enter. The perpetrators had time to film the beheading and then play football with the victim's head in the courtyard.

At the same time, the Ecuadorian prison system suffers from overcrowding and political neglect. Like most countries in the region, Ecuador has submitted to the war on drugs and reformed criminal proceedings along the lines of the American model.

Convictions mostly come about in rapid proceedings and for minor property and drug offenses. Serious acts are rarely prosecuted. Most of the prisoners in Ecuador would not have to fear imprisonment in Germany.

Everyday life in prisons is characterized by violence and corruption. The transition between the police and criminal gangs is fluid.

How many of the victims were actually killed by rival gangs or by the police when the mutiny was put down will not be clarified in the absence of independent investigations. It seems certain that the outbreak of violence did not occur in spite of, but rather because of, the militarization of the prisons.