Which coding bootcamps are the top 10

The great need for specialists in the field of software development, first in the USA and then worldwide, has resulted in more than 300 so-called coding bootcamps being set up in recent years. The promise of these camps sounds tempting, but what's behind it? Will coding bootcamps soon replace entire courses of study?

"We'll teach you to program in 12 weeks and help you successfully start your career as a programmer." - Most coding boot camps advertise this with this attractive promise. Many providers even go so far that they finance themselves through a percentage of the first salaries after the camp or give a money-back guarantee if you have not found a job as a programmer a short time after the camp. The price of many offers is correspondingly high at up to US $ 20,000.

With Stackademy or Hackership, there are also offers of this kind on the German market. The German startup CareerFoundry, on the other hand, pursues an e-learning approach in which six-month online courses are offered in the areas of web development, UX design and UI design, and there is even one Money-back guarantee if you haven't found your dream job within six months of completing a course.

But are these promises realistic, or is a lot of money just being made with people hoping for a quick entry and promotion without them benefiting in the long term? Or to put it another way: Can a 12-week program not only provide a candidate with the latest specialist knowledge with a limited half-life, but also the competencies and skills that will help them to be up to date in their job 10 years later and with dynamic technological developments to keep up?

If you look at the number of participants, many seem to answer this question with a yes. While there were 6,740 graduates in the USA in 2014, Course Report estimates the number of graduates for 2015 at over 16,000. The sales of the providers increased accordingly from 52 million to 172 million US dollars.

At the same time, a course report graduate study (possibly not entirely altruistic) highlights the success of the programs. 665 graduates from 44 different coding schools provided information on their professional careers after completing the boot camp. Four months after completing the program, 89 percent of graduates had jobs and their salaries increased by an average of $ 18,000. This would have brought them back the average of $ 11,852 for the boot camp. 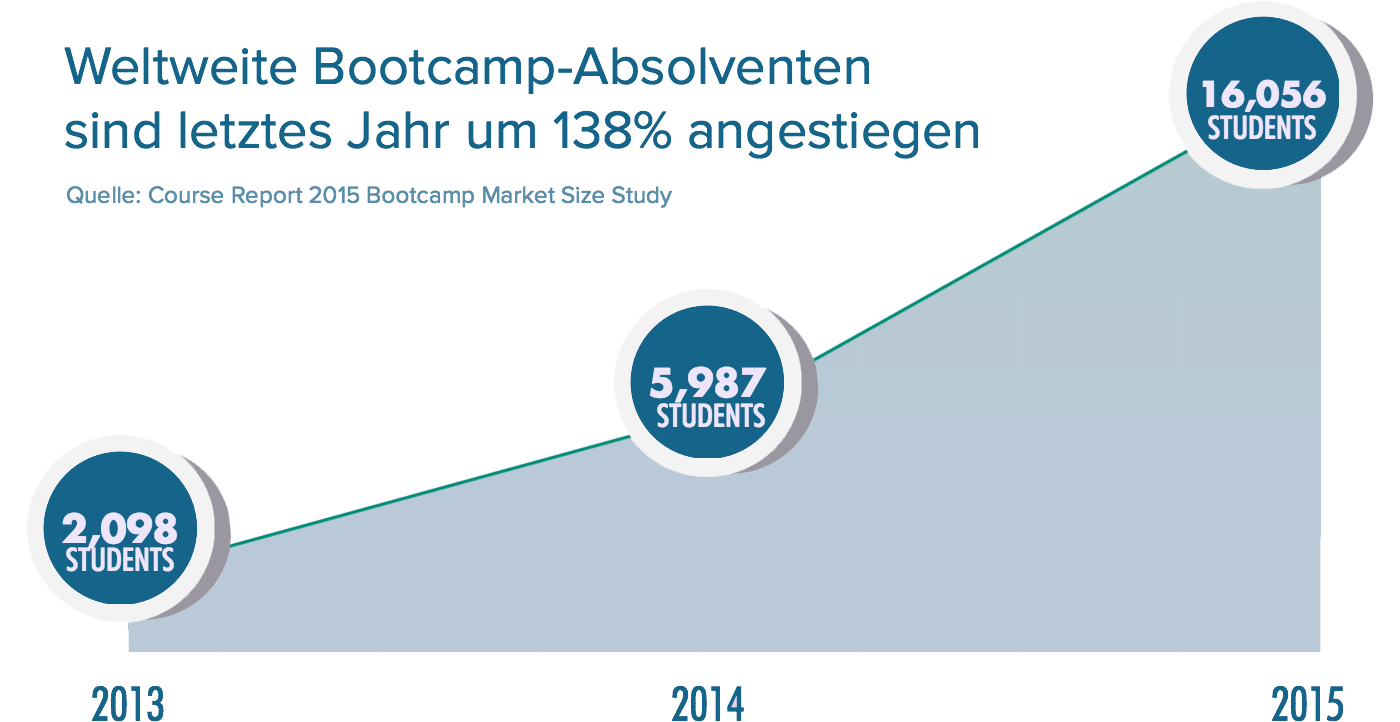 Looking at these numbers raises some interesting questions, even if you don't have to go as far as those who see the success of boot camps as the future of education and the demise of computer science courses. Roshan Choxi asks this question in his (as co-founder of a boot camp, perhaps not completely impartial) “Coding bootcamps are replacing computer science degrees” and refers, for example, to the comment by Daniel Gelernter, CEO of the tech startup Dittach:

There isn't a single course in iPhone or Android development in the computer science departments of Yale or Princeton. Harvard has one, but you can't make a good developer in one term. So if a college graduate has the coding skills that tech startups need, he most likely learned them on his own, in between problem sets. As one of my developers told me: ‘The people who were good at the school part of computer science — just weren’t good developers.’ My experience in hiring shows exactly that.

[...] But my lead developer didn’t graduate from college, and neither did my other full-stack developer. I do have one developer with a degree in electrical engineering: did he learn any of his development skills in college, I ask? No.

So are coding bootcamps the better alternative to universities? Do the existing universities have to fear this development? Here, too, the graduate study provides exciting insights. The average participant is 31 years old and already has 7.5 years of professional experience and in almost 80 percent of cases at least a bachelor's degree. Less than three percent of respondents had no college experience at all.

So the typical way to a coding bootcamp leads through a (non-subject) university degree. In this sense, bootcamps do not offer full-fledged “training”, but targeted “further” training. Perhaps the secret of success lies precisely in this combination of an academic education and several years of professional experience with a concentrated, practice-oriented coding training?

The profile of bootcamp graduates who have previously completed an academic degree in another subject is somewhat reminiscent of the concept of T-Shaped Professionals, for which Tim Brown, CEO of IDEO, is a strong advocate.

The criticism of typical computer science graduates is appropriately almost always directed towards their inability to connect with non-techies or their lack of practical, communicative and social skills. In contrast, the bootcamp graduates described here already have the communicative and social learning experience associated with a bachelor's degree as well as expertise from another subject that makes them suitable for non-techies as well.

As a result, the first universities have already begun to see boot camps not as a threat but as an opportunity and to integrate them into their existing courses. On the one hand, this is a sign of open-mindedness, but on the other hand, it is also an indication that these universities, although they have recognized the problem, are unable or unwilling to change their own study programs accordingly.

The average cost of a boot camp is $ 11,000 Source: Bootcamp Market Size Study 2015 from Course Report

Now it can be a bad recommendation to a young person to look for some kind of study and then to take part in a coding bootcamp. Instead, the question must be what an educational program should look like that combines the advantages of academic studies with what makes boot camps so attractive in the eyes of participants and employers?

A project-based course of study would be conceivable in which the students - instead of sitting in basic courses over several semesters - work on practical projects right from the start, while the university lecturers guide the students in their professional and personal development and help them at the right times, to develop the theoretical and methodological basics, the practical relevance of which is derived from the project experience.

In such a degree, the intensive project work would be embedded in a larger learning context that offers sufficient space and guidance for the development of theoretical, social and communicative skills. And all graduates already have a large number of contacts with potential employers or co-founders through their projects.

This is the approach taken by startups like Make School and Holberton School, both based in San Francisco. They offer a two-year, strongly project-based and study-like model that they position as an alternative to college. In our opinion, this is a very promising model that tries to combine the advantages of both worlds.

One can only hope that the existing universities will not interpret the success of the Coding Bootcamps as a threat, but rather as an impetus to revise their own study programs and convert them to modern didactics.

And as far as the project-based course described above is concerned - if such a university doesn't already exist, you should urgently found one ...

In our next blog post: Why Coding Bootcamps are much more successful in attracting female participants than traditional courses in Germany and the USA, and what we can learn from them to get more women interested in digital professions in the future.