What are the disadvantages of a greenhouse

If you want to grow flowers, vegetables and fruits that don't do well in our outdoor climate, you need at least a greenhouse that simulates southern climates to grow them. If you would like to sow and cultivate many different flowers and fruits, you need a large greenhouse, and that can easily cost four-digit sums in a stable design that should be permanently in the garden. A foil greenhouse is cheaper and easier to set up; the following is about its advantages and disadvantages and tips on how to set it up.

The advantages of the foil greenhouse

With that we have named many advantages of a foil greenhouse, but not the actually decisive advantage: You simply won't think for several years before you build a greenhouse in the garden to give preference to heat-loving types of vegetables and fruits. This means that you don't have to wait several years before you can enjoy delicious tomatoes, peppers and aubergines from your own harvest. If you know such vegetables have only been harvested half-ripe and have been imported over long distances from the supermarket, these taste experiences can certainly open the way to a healthier life. So that should be emphasized again before we get to the disadvantages.

The pleasantly simple construction of the foil greenhouse also has disadvantages on the other hand:

A foil greenhouse is covered with foil, as a larger visible element in the garden not everyone's taste. You should find out exactly which type of film is being used. Foil greenhouses are still being offered in which the foil is made of very environmentally harmful PVC. Most foil greenhouses today are covered with PE foil. Although they are not among the most environmentally harmful plastics, they are still a plastic compound. PE = polyethylene is made from crude oil, so it consumes finite resources. It can be mechanically recycled quite well, but it takes about a millennium to rot. The resistance of PE and film in general has its limits. Foil should e.g. B. never lie directly on the metal without a pad, because otherwise it quickly becomes brittle in the heat.

Select a plastic greenhouse with a view to its use

Covering with foil certainly has specific effects on the temperature and climate in the greenhouse. This is not necessarily an advantage or a disadvantage. However, it is not unimportant that you consider the planned main use before you decide on the simple variant of the foil greenhouse, because:

However, if you actually dream of cultivating rare orchids all year round, or if you want to harvest fresh lamb's lettuce and parsley in winter, one of the common foil greenhouses will not be able to fully meet your requirements.

Basically, the construction of a foil greenhouse should not overwhelm you. However, some considerations around the structure are recommended:

Alternatives to the conventional plastic greenhouse

All of the above applies to the "normal" plastic greenhouses that you can buy in the garden center or hardware store. When it comes to the key word greenhouse, there are still many other options open to you besides purchasing the prefabricated products:

1. You could build the frame for your foil greenhouse yourself, in exactly the dimensions that can best be integrated into your garden. Or in exactly the design that best suits your home. There are plug-in elements to buy today with which you can also design your plastic greenhouse as an extraordinary design object.

These plug-in elements are called "Vario quick". They are sold by GeKaHo GbR in 77960 Seelbach. Information on www.gekaho.de. The plug-in elements cost a few euros per part. They can be used to connect standard wooden strips 24 × 48 mm quickly and easily, and not just at right angles. 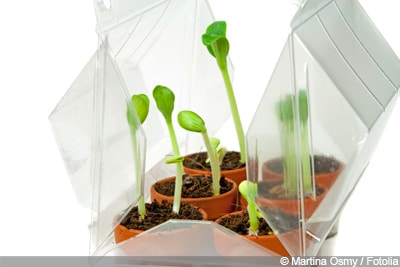 2. This self-designed basic structure naturally needs a film, which is available from many retailers. The foil of a pre-purchased foil greenhouse also has to be renewed every few years. Polyethylene film is z. B. under www.pe-folie.de offered as greenhouse film. PVC film can also be found from time to time. However, buying serums cannot be recommended for ecological reasons.

Today, however, there are also brand new and much more exciting foils that you could use to clad your greenhouse frame. For example, a film made of ethylene tetrafluoroethylene (ETFE), which has been causing a sensation for several years. The dome-like greenhouses of the "Eden Project", the unique botanical garden in Cornwall, UK, are covered with ETFE. The geodesic domes were used as backdrops in the movie "James Bond - Die Another Day". The Gondwanaland, the giant tropical hall in the Leipzig Zoo, the tropical amusement park Tropical Islands near Berlin, the Olympic Stadium in Kiev and the roof and facade of the Allianz Arena are also covered with ETFE or ETFE foil cushions.

Greenhouse film made of ETFE is sold under the brand name F-Clean by AGC Chemicals Europe, based in 1077 XV Amsterdam. Information at www.f-clean.nl. F-Clean ensures early harvest and maximum fruit quality because it lets 94% of UV light through. It cleans itself, is guaranteed to last 10 years and makes greenhouses usable all year round. It is not exactly cheap, but a worthwhile investment (which also looks much more attractive than the other foils).

Conclusion
Foil greenhouses in many smaller and larger versions enable a considerable expansion of the menu and the exotic plants in the garden. Have you ever thought of growing artichokes, they are both? The range of variation was only indicated above. There are also poly tunnels and cold frames, mini greenhouses and tomato hoods, raised beds with greenhouse covers and bamboo growing bells, Victorian growing bells and grower systems with zips that can be set up in no time at all, all of which can be bought ready-made and most of them can be made yourself.