Huawei MateBook X Pro in the test: Green is hope 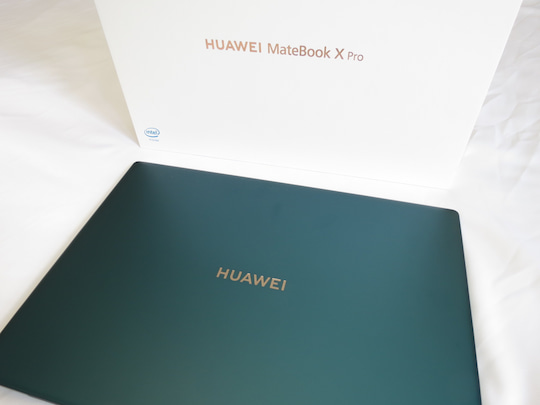 The Huawei MateBook X Pro in emerald green
Image: teltarif.de / Alexander Kuch At the beginning of June the time had come: Huawei presented this year's laptop generation. The company is by no means abandoning the US ban that is supposed to hit Huawei's smartphone division - and Huawei is evidently allowed to publish notebooks with Windows 10 with impunity.

Huawei is thus intervening directly in the laptop market, which for years has been dominated by Lenovo, Dell, HP, Apple, Microsoft, Asus, Acer and others. And the new Huawei MateBook X Pro not only looks good, it also has interesting design features. In this test, we explain that it can sometimes get a bit "heated". The Huawei MateBook X Pro costs around 1840 euros in the configuration we tested with 16 GB RAM and 1 TB SSD.

The Huawei MateBook X Pro is not only available in the usual space gray, but also in the color "emerald green". With this, Huawei would like to consciously differentiate itself from the uniformity of black and gray laptops of the competition. According to our taste, the emerald green device looks classy with its metallic shimmer, without drawing too much attention to itself. At 1.34 kg, the MateBook X Pro is also pleasantly light and, at 1.46 centimeters, nice and flat.

Huawei is not only represented on the laptop market with the MateBook series, but recently also through its Honor brand with the MagicBook. In our test, we had already certified the Honor MagicBook 14's robust workmanship - and it is exactly the same with the Huawei MateBook X Pro. The device is torsion-resistant, cannot be bent and, above all, the floor is very robust. However, we would not recommend placing objects on the lid, as this would then bend slightly, which could damage the display. 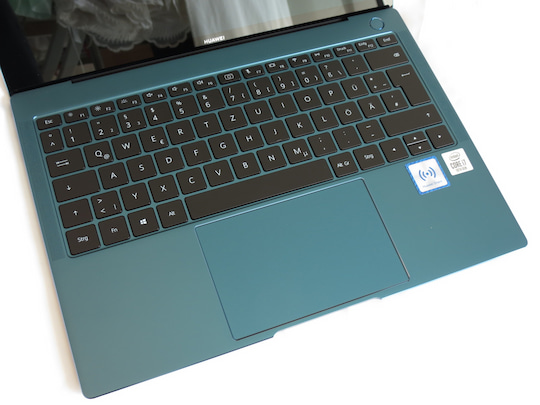 Keyboard and NFC tag sticker
Image: teltarif.de / Alexander Kuch The 13.9-inch display (resolution: 3000 x 2000 pixels, aspect ratio 3: 2) has, according to our taste, very high color fidelity, brightness and brilliance (pixel density 260 PPI, contrast ratio 1500: 1, maximum brightness: 450 nits). However, the highly reflective display is and remains a matter of taste: Multimedia fans love reflective displays, especially when enjoying films and series because of the higher sharpness, business users who occasionally have to work in the train or on the back seat of a car , however, tend to prefer a matte display (which is what the Honor MagicBook offers, for example). On the other hand, the display of the MateBook X Pro is much more stable in terms of viewing angles and is easy to read from an angle of around 25 to 30 degrees. The touchscreen always responded reliably and quickly in our test. 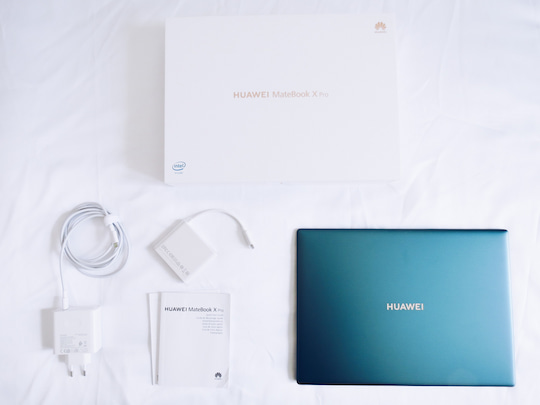 The scope of delivery of the MateBook X Pro
Image: teltarif.de / Alexander Kuch

Windows 10 Home is preinstalled on the Huawei MateBook X Pro. Buyers who are happy about the 1 TB SSD could experience the first disappointment after a few days or weeks with the laptop - at least that's what happened to us in the test. When we started to install our typical benchmark software for the test, Windows reported after a short time that the memory was almost full. And that with a 1 TB SSD?

A look at the partitioning of the SSD showed the misery: Huawei only assigned 80 GB to the Windows 10 partition. Windows already occupies half of that. And if you want to install a lot of application software, you usually need at least 60 to 70 GB, and you always have to leave some space for the Windows swap file (ideally about 20 percent of the system partition should be free).

So if you only work with cloud services such as Microsoft 365 or Adobe Creative Cloud with the MateBook X Pro, you don't have to change anything in terms of partitioning. But if you want to install software, it is best to enlarge the system partition to around 120 GB - there is still enough space for personal data on the second partition.

The "Huawei Share" sticker should never be removed from the case, because it contains the NFC tag with which the laptop is connected to other Huawei devices for data exchange. Otherwise, only the Huawei manager for software and BIOS updates is preinstalled as typical Huawei software. 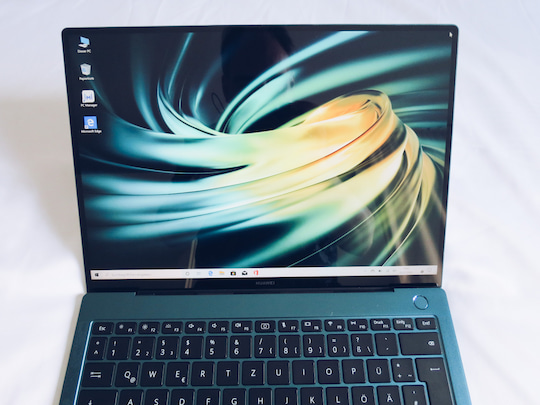 The Huawei MateBook X Pro is the 10th generation Intel processor in the form of a Core i7-10510U quad-core with 1.8 GHz (Turbo up to 4.9 GHz). Huawei has provided 16 GB LPDDR3-RAM (2133 MHz) to the side. In addition to the graphics chip integrated in the processor, Huawei has given the MateBook X Pro a second GPU, an NVIDIA GeForce MX250.

With this combination of processor, graphics chip and RAM, the MateBook X Pro is also a decent workhorse, which is of course also suitable for games, although there are definitely stutters in graphics-intensive games. We then saw the measurable result in the Cinebench R20 benchmark: Most users imagine a "Core i7" to be between that of the Core i5 and that of the Core i9. With the MateBook X Pro, however, you have to state that the performance is only slightly higher than that of the best Core i5 models. 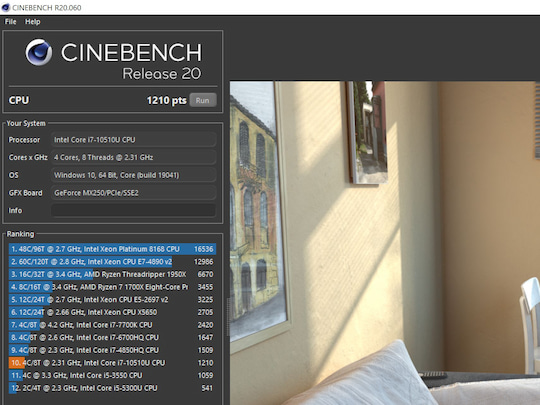 The CPU performance is only slightly above the best Core i5 models
Screenshot: teltarif.de If you put the Huawei MateBook X Pro to good use in terms of performance, you also notice why Huawei has probably not opted for even more performance: Apart from the hinge area, the MateBook X Pro does not have a single ventilation slot, just a few punctiform openings on the ground. The two openings on the side with a black border are the loudspeakers. Under full load, the Huawei MateBook X Pro got so hot, especially on the underside, that we could hardly touch it for a long time. So you shouldn't necessarily work with it on your knees.

Since there are only real ventilation slots in the hinge area, as I said, the fan had to turn up a lot, which was noticeable by a constant noise. We must therefore state that the MateBook X Pro is a reliable workhorse, but if you overuse it, you have to live with fan noise and a heated case bottom. 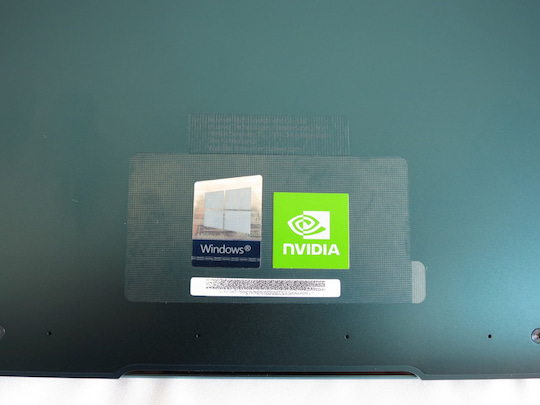 The keyboard of the device is also of high quality to our taste. The keys are big enough, have a good pressure point and a sufficiently large lettering with backlight. The fingerprint sensor was integrated into the power button.

The special feature of the device is also hidden in the keyboard - namely the webcam. In times of surveillance madness, numerous laptop users have started masking their webcams, which usually looks ugly and leaves ugly adhesive residue. With the Huawei MateBook X Pro, the camera can be retracted into the keyboard and looks like a button. If you press it, the camera pops out and can be used. With the push of a button it is lowered again after use and there is no chance of secret surveillance.

For security fetishists, this is a brilliant idea, which has the pleasant side effect that the upper edge of the display can be narrower. In practice, however, you have to expect that the perspective of the image is also different, the face is just filmed slightly from below instead of directly from the front. Especially with a pronounced double chin, this may not always be a very advantageous perspective. 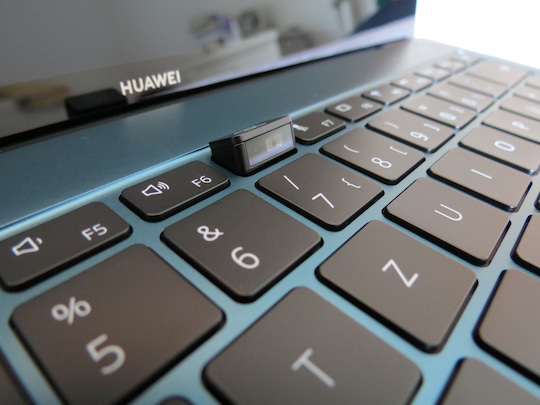 The webcam, which can be retracted into the keyboard
Image: teltarif.de / Alexander Kuch

As with numerous other ultrabooks that emulate the Apple Macbook Air, the flat design results in a loss of connections. The Huawei MateBook X Pro has two USB-C ports (for data transfer, charging and DisplayPort), a USB-A 3.0 port and a 3.5 mm jack socket for headphones and microphone - and that's it. Nowadays it is normal for such devices to have no LAN connection. The MateBook X Pro does not have a separate charging port, but is charged via the USB-C ports.

So if one is occupied for charging and the other is possibly for an external projector or monitor, only one USB port would be free. Fortunately, Huawei includes a pretty good adapter with the MateBook X Pro ex works, which is plugged into one of the USB-C sockets. It also provides a USB-C, a USB-A, a DVI and a VGA port and thus takes on the role of a docking station, so to speak. What the MateBook X Pro lacks completely is a memory card reader.

We think the speakers of the Huawei MateBook X Pro are well done, and they sound much better than those of other laptops. Although they naturally lack a bit of bass, they have a natural and clear sound, which makes the MateBook X Pro well suited for listening to music and for enjoying films and series.

The device's lithium polymer battery is nominally 56 watt hours. Huawei specifies a battery life of up to 13 hours of video playback for the MateBook X Pro. This is clearly exaggerated - especially when the display brightness is set high - and should only be an ideal value from Huawei's test laboratory. In our battery test, which simulates a mixture of office work, internet surfing, video telephony and video playback, the battery lasted exactly 8 hours with the brightest display setting. 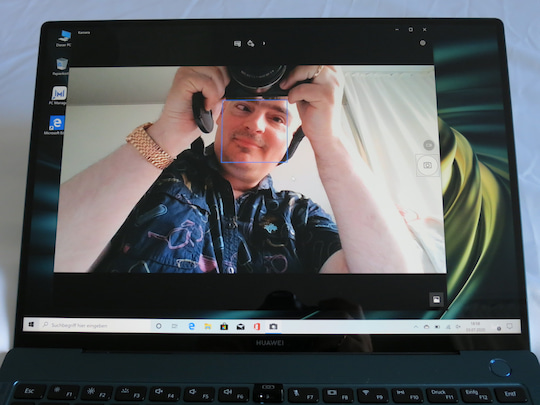 The Huawei MateBook X Pro proves to be a chic, stable and reliable everyday laptop that is nice and light and shines with a lot of storage space. The glossy display might not please everyone, but the presentation is very good. The webcam, which can be retracted into the keyboard, is a brilliant idea and saves the annoying masking off. Where there is a lot of light, there are also shadows: the system partition is too small ex works and the properly working Core i7 processor sometimes makes the laptop quite hot. In addition to the good-sounding speakers, Huawei should also dare to mill ventilation slots in the display.
<?