Why are Blackberry Phones so expensive

Blackberry Priv will be more expensive than the iPhone 6S 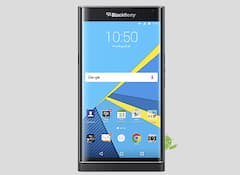 Blackberry Priv is getting extremely expensive
Photo: Carphone Warehouse The Blackberry Priv is expected to hit the market at least in the USA at the beginning of November. There is not yet a date for the start of sales in Germany. In industry circles, however, there is speculation that the slider with the Android operating system and hardware keyboard will also be launched in this country in November.

Carphone Warehouse in Great Britain has now published extensive technical details on the Blackberry Priv, including the sales price for the Canadian manufacturer's new flagship smartphone. The price in particular is a surprise, albeit a negative one. The device is said to be sold on the island without a contract for £ 579.99. That is the equivalent of around 790 euros.

This makes the Canadians' new flagship cell phone more expensive than many of the current iPhone or Samsung Galaxy models. So the failure of the bolide is almost inevitable, because only a few interested parties are likely to be willing to put almost 800 euros on the table for a Blackberry.

Blackberry is in a kind of vicious circle. The company plans to sell at least five million smartphones a year in order to be able to work profitably. If it is not possible to achieve this goal, the manufacturer's hardware division is even up for grabs.

Is the Priv the last Blackberry smartphone?

Blackberry Priv is getting extremely expensive
Photo: Carphone Warehouse It is noticeable, for example, that there are no leaks for new Blackberry cell phones beyond the Priv. In the past, entire roadmaps were often leaked. So it is not unlikely that Blackberry will wait for the success of the Priv and only then decide whether there will be new smartphones from the Canadians.

There should definitely be enough interested parties for a high-quality Android smartphone with a real keyboard. The targeted sales price alone speaks against the device being successfully launched on the market.

The phone is 147 by 77.2 by 9.4 millimeters and weighs 192 grams, making it as heavy as the iPhone 6S Plus. If the slider is opened to use the hardware keyboard, the device extends to 184 millimeters. The core is the Qualcomm Snapdragon 808 (1.8 GHz dual-core and 1.44 GHz quad-core), which is supported by 3 GB of RAM. The smartphone has 32 GB of internal storage space. MicroSD memory cards up to 2 TB in size can be used for this.

The operating system is Android 5.1.1, although there is still no information about a possible update to version 6.0 of the Google firmware. The main camera has 18 megapixels and comes from Schneider Kreuznach. There is also a 2 megapixel front camera. As with all newer Blackberries, a nano SIM is used. The battery has a capacity of 3410 mAh and Blackberry emphasizes that the device has a particularly high audio quality.