It is possible to sit down with a heavy backpack on your back. But how do you get back up? Mostly not without help. For movement scientists like Prof. Dr. Daniel Hahn and his team a riddle. The popular theory of muscle strength cannot explain it.

The reason for the different strengths that a muscle can generate is its stretch. Many movements, such as walking, rely on muscles being stretched over and over before they actively contract. "When I lift a weight, the corresponding muscle contracts, it contracts concentrically," explains Daniel Hahn. “But when I give in to gravity because I sit down or go down a flight of stairs, the muscle is stretched. Even so, he is tense to control the movement. We speak of the eccentric contraction. "

To find out what causes this difference, researchers initially only looked at the isolated muscle. Individual muscle cells, for example from rats, are artificially activated without and during stretching. It was found that under these conditions the force of the stretched muscle is 1.5 to 2.5 times greater than that of the unstretched.

Different result in the test

Tests with test subjects who had to pull a lever while a machine was pulling the lever back, thereby stretching their muscles, usually gave a different result: Here, the force with eccentric contraction was not or barely greater than with contraction without stretching. 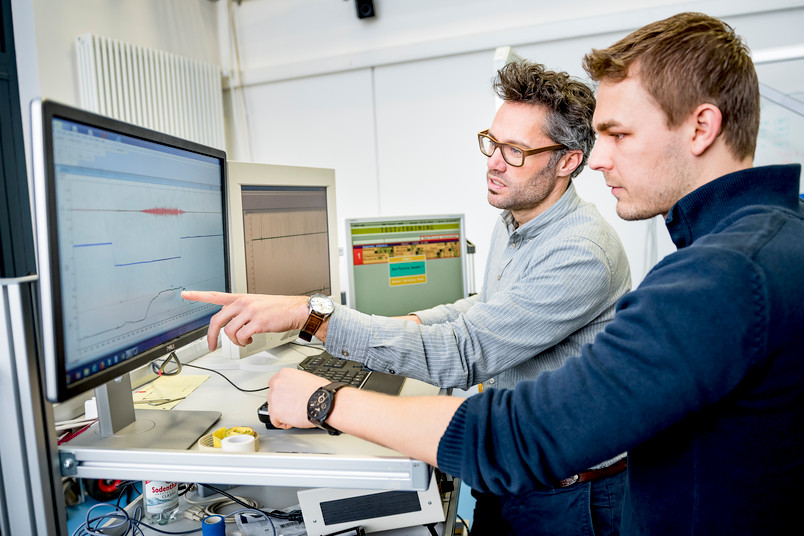 Since these results contradicted not only the muscle experiments but also the everyday experience with eccentric contractions, the research interest was aroused. "When we talk about the muscle in humans, we actually always mean an ensemble that also includes the tendons, the connective tissue and the nerves that control the muscle," describes Daniel Hahn. To unravel the mystery of eccentric force during stretching in humans, each of these components must be considered.

"Increased muscle strength can only occur if the muscle fibers are stretched themselves," explains Daniel Hahn. "If I bend my knee while going down stairs, the muscle stretching of the thigh can be buffered by the elastic tendons without stretching the muscle fibers." This would also explain why no increased eccentric forces were found in many experiments with test subjects.

To ensure that the muscle fibers are stretched in their own experiments, Hahn and his team from the Movement Science Teaching and Research Department therefore used ultrasound. Ultrasound makes it possible to make the muscle fibers visible during the contraction and thus to check whether they are really being stretched.

In addition, the researchers around Hahn concentrated on the neural aspects of muscle movements, i.e. on the control of muscle activity starting from the brain via the spinal cord and the corresponding nerve tracts. The signals always go in both directions: motor signals from the brain to the muscle, sensory signals from the muscle to the brain. The researchers investigated these signals and their effects using various experiments. 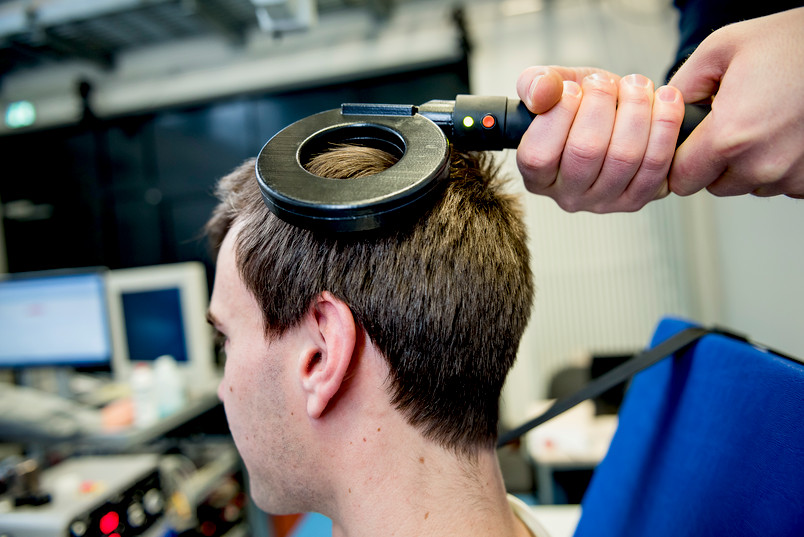 With transcranial magnetic stimulation, nerve cells in the brain, which are responsible for the activity of certain muscles, are activated externally with a coil.
© Damian Gorczany

They measured the muscle activity in the unstretched and stretched state not only when the test subjects tensed the muscle willingly, but also when the muscle was also made to contract by electrical stimulation on the nerve or spinal cord or by transcranial magnetic stimulation. The brain areas of the motor cortex, which are responsible for activating specific muscles, are stimulated directly through the top of the skull with a magnetic coil.

Since the muscle strength increases less with eccentric contraction in living organisms in contrast to isolated muscle cells, the assumption was made that the nerves inhibit the strength. "But that could not be proven in our experiments," reports Daniel Hahn.

What the researchers were able to determine, however, was that the nerve cells in the brain were more easily excitable after stretching a muscle while the test subjects were still tensing than without stretching. This could be one of several factors that lead to increased strength after stretching. It is still unclear why the excitability is higher.

Looking at the muscle itself, Hahn and his colleagues have another suspicion, which could be partly responsible for the increased strength when stretching: a protein called titin.

The contraction of the muscle is based on the fact that two overlapping proteins - the thin filament actin and the thick filament myosin - slide into each other in the muscle cells. This shortens the muscle. This process has been described in what is known as the cross-bridge theory since 1957.

However, it wasn't until almost 20 years later that a third muscle protein, titin, was discovered. “It had been overlooked before. Interestingly, not because it is so small, but because it is so big, ”said Hahn. The titin could act like a molecular spring that acts as a counterpart or complement to the contraction in the muscle cell. Experiments have shown that this spring changes its properties dynamically, i.e. becomes stiffer when the muscle is stretched. This would mean that a greater force would come about with less energy input.

The Bochum working group will continue to get to the bottom of these questions, starting in 2018 in a new project funded by the German Research Foundation. It deals with the question of what part of the force amplification during and after eccentric contraction the nervous system, tendons and muscles themselves have.

"The results are not only interesting for basic research or performance enhancement in sport, but also for questions relating to prosthetics and robotics," says Daniel Hahn. Studies by American researchers have shown that an exoskeleton that supported the leg with external suspension enabled energy savings of seven percent when walking.

Prostheses could be moved more naturally and enable a smooth walk.

With a more precise knowledge of the neuromuscular mechanisms, it would be conceivable to continue to refine such support systems and to adapt them to natural movement sequences, for example when walking. A spring that changes its properties, for example the heel gets harder after contact with the ground and later becomes softer again, could then enable weakened or injured people to remain mobile on their own.

"The more we know about the details of the complex movement sequences, the better we can also build artificial systems that replace body parts, for example," said Hahn, looking to the future. "Prostheses could then be moved more naturally and enable a round walk."

The selected images are downloaded as a ZIP file.
You will find picture lines and picture credits after unpacking in the included HTML file.
<?