What is a Mueller-Lyer illusion

What can you do here?

Use the mouse to click on the moving arrow and drag its tip to the center between the outer arrowheads. Then press “Show result”, then the center is marked and the deviation from it is displayed in%.

Why don't I hit the middle?

It is completely normal not to hit the middle of this so-called Müller-Lyer deception (1889). For me it's about 10% off. I have classified this phenomenon in the category “constancy of size” because I find the perspective explanation (see below) largely convincing. In Müller-Lyer's original picture there are two arrows, I used the Brentano variant here.

An article in the important German satirical magazine “Pardon” showed these delicious elephants on the right around 1970 (presumably by F. K. Waechter). You can see from this that the Müller-Lyer illusion (after pardon “two very young assistant doctors”) also has an effect on enclosed objects ;-) - yes, one elephant is even happier! 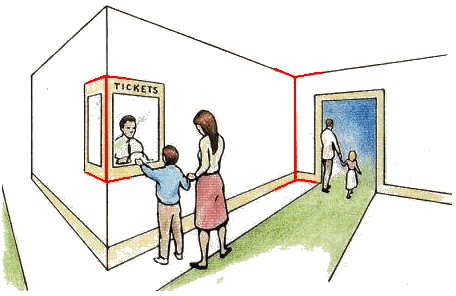 How does this work?

The picture on the right (by Amazingart) explains the explanation about perspective and thus about constancy of size (Gregory 1968). The lines marked in red correspond to the parts of the arrow of the Müller-Lyer illusion. The vertical lines between the arrowheads not only look different lengths, they would also be in reality in the depicted scene. The arrow configuration “tail inwards” as in front of the switch is always a front edge, “tail outwards” as in the back in the corner must be a rear edge (here of the room). If everything else is the same, “tails inwards” is assumed to be closer and therefore per size constancy is seen as smaller, since the two lines in picture are the same length.

Dewar RE (1967) Stimulus determinants of the magnitude of the Mueller-Lyer illusion. Perceptual and Motor Skills 24: 708-710