Can I forecast with logit regression

The (binary) logistic regression analysis is used when it is to be checked whether there is a connection between a dependent binary variable and one or more independent variables.

In contrast to simple regression analysis and multiple regression analysis, the dependent variable is binary. That is, it has only two forms; e.g. a variable Heart attackwhich takes on the following values: 1 for "yes, has already had a heart attack" and 0 for "no, has not had a heart attack". There is also talk of "dichotomous" variables. The independent variables, on the other hand, are interval-scaled or coded as dummy variables.

It should be noted at this point that every postulated causal relationship must be theoretically justified.

The question of the logistic regression analysis is often shortened as follows:
"Do the independent variables have an influence on the probability that the dependent variable takes on the value 1? How strong is their influence?"

A bank is interested in facts related to the likelihood of someone buying shares. It therefore commissions a market research institute to interview 700 people. It is assumed that the decision to buy shares is influenced by annual income (in thousands of CHF), risk tolerance (scale from 0 to 25) and interest in the current market situation (scale from 0 to 45).

The dataset can be downloaded from Quick Start. 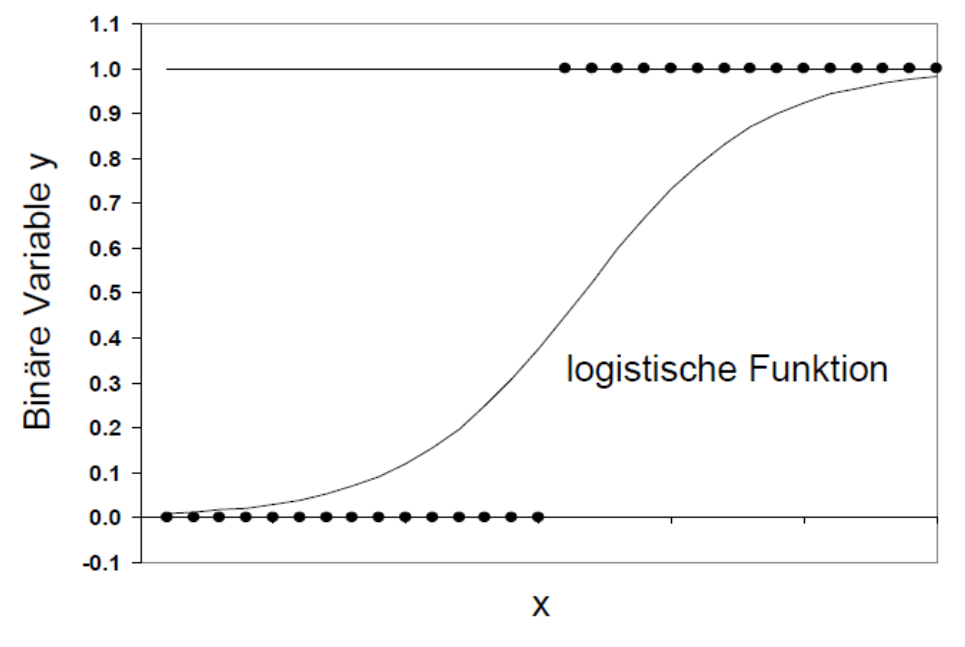 The logistic regression function is as follows:

If the logit is now used in the logistic function, the result is:

The regression coefficients are estimated by the maximum likelihood estimation (MLE) algorithm. MLE determines the regression parameters in such a way that it predicts the highest possible probabilities for the observed y-values ​​when y = 1 and the lowest possible probabilities when y = 0. MLE maximizes a "likelihood function" that states how likely it is that the value of a dependent variable can be predicted by the independent variables. The value of the likelihood function can be used to estimate the model quality and model significance, as will be seen below.

Interpretation of the regression coefficients

The relationship between an independent variable and the dependent variable can be interpreted more precisely by means of so-called "odds" (or: betting odds). To calculate the odds, the probability that the event will occur is related to the non-occurrence of the event. Odds are calculated as follows:

The following relationship is derived from this and is useful for interpreting the regression coefficients:

3.1. Formulation of the regression model

When formulating the regression model, it must be decided which variables are included as dependent and independent variables in the model. Theoretical considerations play a central role here. The model should be kept as simple as possible. It is therefore a good idea not to include too many independent variables. In the case of the present example, Share purchase the dependent variable whose probability of occurrence is determined by income, Interest and Risk takingt is predicted:

Before performing the analysis, it must be decided in which order the independent variables should be included in the model. This can have an impact on the model that is reported at the end of the analysis. If all independent variables are completely uncorrelated, the order in which they are introduced into the model does not matter. In the social sciences and in market research, however, the variables are rarely completely uncorrelated. Thus the method of variable inclusion is relevant.

Methods of variable inclusion in SPSS

SPSS offers different approaches to include the independent variables in the model (see click sequence in Figure 4).

In the present example, the regression model is based on well-founded theoretical considerations, which is why the "inclusion" method is chosen.

In addition, variables can also be saved in Blocks are introduced (hence also "blockwise regression"). This takes precedence over the procedures described so far and can be combined with them as required. Several groups of variables (blocks) are specified, which SPSS includes one after the other in the model. The method already selected is used within each block (e.g. "Inclusion" or "Forward LR"). In a study on the influence of environmental awareness on behavior, for example, the first block could be used to create a model that includes socio-demographic variables. In the second block, environmental awareness is introduced. In SPSS, not all variables are entered in the "Covariates" box at the same time, only those of the first block. Then "Next" is selected and the variables of the second block are inserted, etc.

This procedure has two advantages: Firstly, the sequence in which the variables are included can be specified precisely in this way. Second, SPSS outputs a regression model for each step, i.e. after each block. As a result, the change in regression coefficients due to the inclusion of a specific additional variable can be observed and tests can be carried out to determine whether the model improves through the addition of the additional block.

In the context of the present example, all variables are inserted in the first block in order to keep the example as simple as possible.

3.4. Significance of the regression model

To check whether the regression model is overall significant, a chi-square test is carried out (referred to in SPSS as the "omnibus test of the model coefficients"). This checks whether the model as a whole makes an explanatory contribution to the modal prediction (the modal value of y predicted). For this purpose, this test uses the logarithm of the value of the likelihood function, which was maximized in the course of the model estimation (see The Maximum Likelihood Estimation). This logarithmized value is referred to as "log likelihood" or "LL" for short. To estimate the model quality, this value is multiplied by -2 (-2LL). The value -2LL describes an error term. As part of the significance test, the -2LL values ​​of two models are compared: that of the established regression model and that of the so-called "base model". The basic model is a model that only takes the constant into account. SPSS outputs the value -2LL of the postulated model in the "Model summary" table (see Figure 7), while the value -2LL of the base model is output when the "iteration log" is requested under "Options". The test variable based on this comparison follows a chi-square distribution:

This table (Figure 5) contains other lines in addition to the "Model" line. These are only significant if "Inclusion" is not used under "Method" or if a hierarchical regression analysis is carried out.

3.5.Significance of the regression coefficients 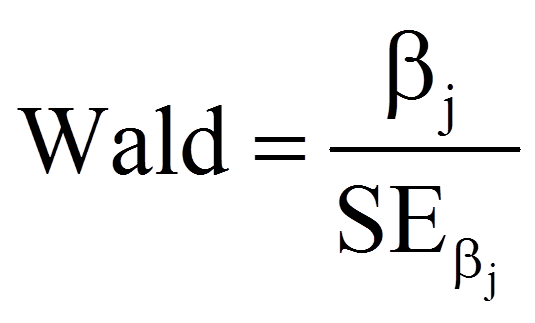 This results in the following regression function:

To assess the model quality, analogies to the R2 linear regression is used. There are a large number of different such pseudo-Rs2 - two of them are implemented in SPSS: the Cox and Snell R2 and the Nagelkerke R2. The Cox and Snell R2 is calculated as follows:

The Nagelkerke R.-Square is calculated as follows:

The Nagelkerke R2 standardizes the Cox and Snell R2so that it can only assume values ​​between 0 and 1. The higher the R2Value, the better the fit between model and data (hence "goodness of fit").

The Nagelkerke R2 for the present example is, as can be seen in Figure 7, at .24.

The logistic regression function calculates the probabilities that the dependent variable will take the value 1. These probabilities vary between 0 and 1. This information can be used to take a closer look at the result if the "Classification diagrams" have been selected under "Options" (or alternatively - not explained in more detail here - if the predicted probabilities have been saved as variables and can then be analyzed separately).

SPSS uses the probability of 50.0% (0.500, see footnote in Figure 8) as a cut-off value to determine whether y = 0 or y = 1 is predicted. From a predicted probability of 0.500, it is predicted that Share purchase = 1 is. With a lower probability it will Share purchase = 0 forecast. If the proportions for y = 0 or y = 1 are the same, a cutoff value of 0.500 can be selected, otherwise it corresponds to the proportion of cases y = 1 and can be read from the classification table in the header. The cut-off value can be set in SPSS under "Options" under "Classification threshold value". The result with the standard setting 0.500 can be seen in Figure 8: 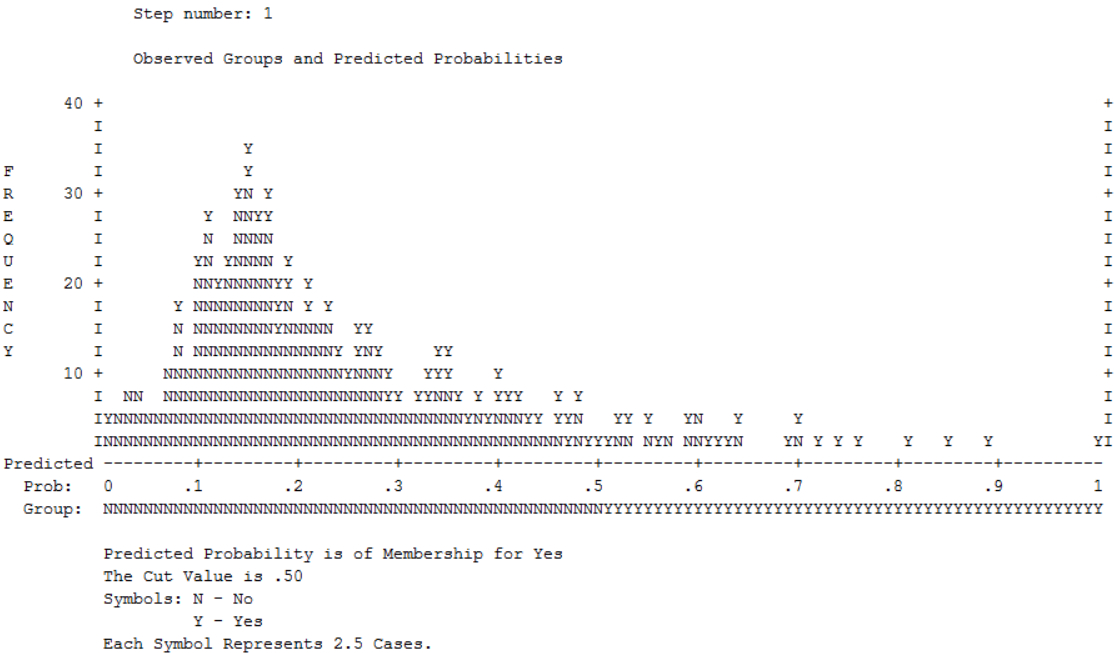 The letters in the diagram represent observations (whether each letter stands for one or more observations can be found in a footnote in the diagram). They give the observed values ​​to the variable Share purchase again ("Y" stands for 1 and "N" for 0). The line below the diagram (the x-axis) shows the predicted probabilities and immediately below is the classification based on it ("N" if the probability is <.500, and "Y" if the probability is greater than .500) ). In the ideal case, the prediction of y is not only correct, but also as clear as possible - that is, few people have medium probabilities.

All "Y" in the left half and all "N" in the right half of the diagram thus correspond to false predictions. If these were counted and multiplied by a factor of 2.5 (see note below in Figure 9), 32 N and 135 Y should be found in the "wrong" half. This diagram also shows that Share purchase = 1 is rather poorly predicted.

3.7. Calculation of the effect size

Effect sizes are calculated to assess the significance of a result. In the example, R.-Square 0.24, but the question arises as to whether this is high enough to be classified as significant.

The R.- The square that is output during regression analyzes can be converted into an effect size f according to Cohen (1992). In this case, the range of values ​​for the effect size is between 0 and infinite. 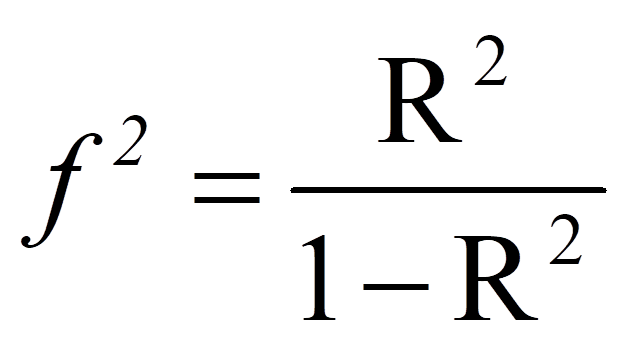 For the above example this results in the following effect size:

In order to assess how big this effect is, one can orientate oneself on the classification of Cohen (1988):

So the effect size of .32 corresponds to a medium effect.

A logistic regression analysis shows that both the model as a whole (chi-square (3) = 125.36, p < .001, n = 700) and the individual coefficients of the variables are significant. If interest in the market situation and willingness to take risks increase by one unit, the relative probability of buying shares increases by 8.9% and 41.6%, respectively. If income increases by 1,000 francs, the relative probability of buying shares decreases by 2.1%. Cohens f2 is .32, which corresponds to a mean effect according to Cohen (1992).