There was cancer in ancient history

Archaeologists have discovered the oldest cancer case in history: on the skeleton of an Egyptian who died 3,200 years ago. The young man apparently suffered from a soft tissue tumor that had spread to the bones. The metastases left small lesions there that have survived to this day. This discovery proves that cancer is not a modern disease, but was also rampant in ancient times, the researchers state in the specialist magazine "PloS ONE".

Cancer is one of the leading causes of death worldwide today. A mixture of genetic factors and environmental influences are considered to be the trigger. So far, however, it was unclear whether this disease is a modern development or whether our early ancestors also suffered from such tumor diseases. So far, there have hardly been any archaeological finds with clear indications of cancer. "So very little is known about the age, epidemiology and evolution of cancer in past human cultures," explains Michaela Binder of Durham University.

Tell-tale lesions on the bone

A new find now shows that there were cancer cases in ancient Egypt as early as 1200 BC. The skeleton was discovered during excavations near the place Amara on the Nile, in northern Sudan, around 750 kilometers north of Kartum. It concerns a young man between 25 and 35 years of age, who was buried lying on his back in a wooden, painted sarcophagus. The young Egyptian from a good family wore a glazed faience amulet as a grave gift.

When the researchers x-rayed the skeleton, they found small, rounded damage to the bones of the collarbones, shoulder blades, upper arms, vertebrae, ribs, pelvis and thighs. A closer analysis of bone samples using scanning electron microscopy revealed that these lesions were extremely similar to those caused by cancer metastases. 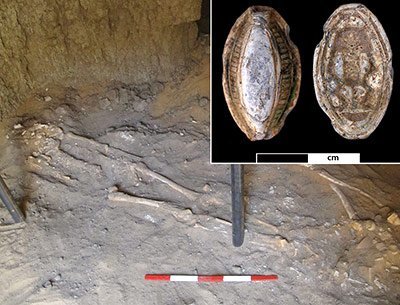 The 3,200-year-old skeleton of the young man, above the faience amulet that he wore around his neck. © Binder et al., / PLoS ONE

"The lesions can only have been caused by a soft tissue cancer, even if the primary tumor can no longer be determined from the bones alone," says Binder. According to the researchers, this is the oldest clear evidence of metastatic cancer in early history. This find shows that cancer is not a modern disease, but was also rampant in ancient times in the Nile Valley.

Researchers can only speculate about why the young Egyptian got cancer at the time. Carcinogenic substances in its environment are possible triggers, including soot from fireplaces, but also genetic factors. Another cause could be a parasite infection. As mummy finds show, the Egyptians and Nubians often suffered from the worm disease schistosomiasis even then. It is known today that it can promote bladder cancer and breast cancer in men, as the scientists explain. (PLoS ONE, 2014; doi: 10.1371 / journal.pone.0090924)