What does it mean to be a soprano

The singing voices in the opera

The tenor is the high male voice and ranges from "a to d´". Like the soprano with women, the tenor is the most sung male voice. Tenors combine head and chest voices. A distinction is made between game tenor, lyrical tenor, hero tenor and character tenor.

Baritone is the middle male voice and lies between tenor and bass. The range goes from "F to b" ". If the baritone tends towards bass, one speaks of bass baritone. There are lyrical, gentleman, hero, character baritones.

Bass (Latin "bassus" = deep) is the deep male voice and the deepest voice of a composition with a range from "C to g" ". A distinction is made between bass buffo, character bass, serious bass, basso cantante.

(English "conceded goal"). This is the highest male voice (range "c to e´´"). This is achieved with head and falsetto voices. Countertenors sing the voices that castrati used to sing (without being any themselves).

Castrati used to sing soprano or alto, that is, high female voices. These "blends" played a major role in the operas of the 17th and 18th centuries; some of them became very famous (Cecilia Bartoli, mezzo-soprano, impressively and skillfully reproduces the singing art of the castrati in her album "Sacrificium"). 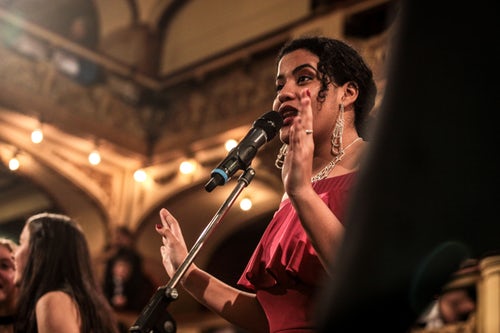 The combination of voices

In addition to solo arias of voices, the musical expression is only particularly beautiful when different voices are presented in joint arias and performances. The classic combination of Soprano and tenor can be found e.g. in Verdi's “La Traviata”, in Puccini's “La Boheme”; Soprano and baritone in Verdi's “Rigoletto”. That is outstanding rare combination of tenor and alto (in a duet) in Verdi's “Luisa Miller” (Schiller, Cabal and Love).
There is a single opera with female voices only (5 x soprano, 3 x mezzo-soprano, 1 x alto): Giacomo Puccini, “Suor Angelica” (Sister Angelica).

If the female voice in an opera is the protagonist, the outstanding role, and if an opera singer is experienced and famous worldwide, an expert in her field, then one speaks of "Prima donna" or even from "Primadonna assoluta". “Seconda donna” is another, the second important female voice and role next to the prima donna. With men one speaks of "Primo uomo", "Secondo uomo".

Coloratura (Latin "color" = color) is the decoration, "coloring" of a voice through trills, fast runs or jumps. Coloratura arias, especially those of the soprano, have been an indispensable part of Italian operas since the 17th century. Are to be distinguished virtuoso and dramatic coloratura. The first is the individual representation of the singing and vocal abilities of a singer (the role and voice are given a personal and brilliant "color), the second is the expression of a role provided for in the role and the composition, for example," addicted to madness "(in Donizetti's "Lucia di Lammermoor"). In the soprano vocal range there is the vocal compartment of a coloratura soprano.

Alfred Deller.
The Romanian Dona Dumitru Siminicá had a skilful falsetto voice, although he did not sing in classical music, but in Romanian folklore.