What is loss of awareness

Burnout is described in the International Classification of Diseases (ICD) as "being burned out" and "state of total exhaustion".
Where does burnout syndrome begin and where does it end? Burnout questions the general concept of illness in part. Any form of stress-induced feeling of overload is not yet a disease. If you have trouble sleeping, have a sensitive stomach or lack of concentration, you normally continue to go to work.

In the case of permanent and chronic overstrain, diagnosable "consequential" illnesses inevitably arise, e.g. depression in the final phase of burnout. Then what is burnout? From our point of view, these are symptoms that are perceived as a chronic state of exhaustion and which, if there is insufficient intervention, lead to secondary illnesses in the mental and physical area. Often there is a strong emotional connection with work that plays a big role. The sooner you recognize the symptoms, the greater the likelihood of preventing serious illnesses.

Burnout therefore represents a dangerous state of exhaustion that can be life-threatening.

We recommend Freudenberger's 12-phase model for further discussion of the course of the disease. 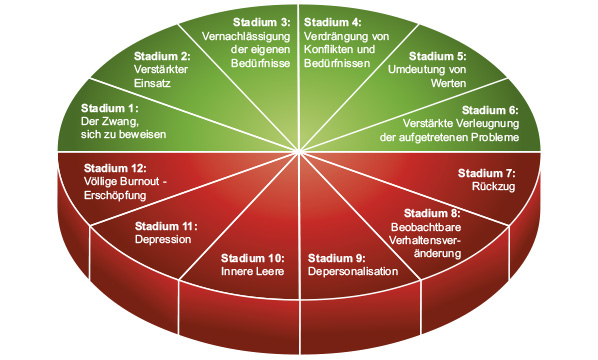 Ambition as an entry factor into the disease: you set too high standards for yourself, you want everything perfectly exaggerated expectations. The desire to prove oneself turns into compulsion and doggedness.

In order to meet the high self-imposed requirements, the commitment in the job is increased

In view of this willingness to work, the satisfaction of one's own needs is increasingly neglected.

Conflicts are being repressed more and more. Own needs are postponed until later or are denied.

Non-professional needs continue to lose importance; no more time can be spent on them.

This waiver is no longer noticed, the overwork and overloading is increasingly being denied. Intolerance and decreasing flexibility increasingly shape thinking and behavior.

Disorientation sets in, but can be covered up by a cynical, apparently unchanged attitude

Only in the further course of the burnout phases do changes in behavior become clearer, such as the defensive attitude towards criticism, the increasing emotional withdrawal from work or the lack of flexibility.

The consequence of this can be a loss of self-awareness (depersonalization), and previous needs are no longer recognized.

You feel useless and you end up with anxiety or addictive behavior.

The absolute end point is total physical, mental and emotional exhaustion, which can be life-threatening.