Which bank has the highest ATMs

The time of uncomplicated regulation at the private banks came to an end in summer 2015, until then they took a direct customer fee of a uniformly low EUR 1.95 at the ATMs of foreign customers if they used the girocard for withdrawals within Germany. Many institutes are now taking more. Each savings bank and each cooperative bank also sets the fee for external customers independently. Most of them are in the range between EUR 1.95 and EUR 4.95. Some also differentiate in price between locations with other cash machines nearby and locations without competition. Read how you can get cash at home and abroad at no cost.

The German banks have become several ATM networks united in order to be able to offer their own customers a free cash supply as nationwide as possible. The savings banks maintain the largest and most widely branched network of ATMs with 23,000 ATMs. This is followed by the BankCard ServiceNetz der Volks- und Raiffeisenbanken with 17,600 positions as well as the cash group of the big private banks with 9,000 ATMs founded in 1998. The smallest network is the CashPool with 3,200 positions, which was established in July 2000. The similarity of the names of Cash Group and CashPool invites confusion. One could also assume that the Sparda banks, for example, belong to the BankCard ServiceNetz, since they are affiliated with the Association of Volks- und Raiffeisenbanken. But the Sparda banks are going a different way and are in the cash pool. Direct banks often belong to an association through their parent company. The following overview contains information on member banks and the number of ATMs. The nearest ATM can be queried via the linked websites. Of course, withdrawing money within your own bank is no longer free of charge; it can be restricted, for example, if fees are charged from the first, third or fifth withdrawal per month, depending on the account model. 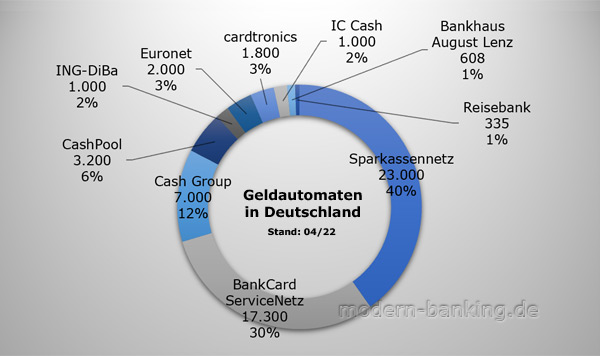 The providers specializing in ATMs have greatly expanded their business in Germany in recent years. Euronet and Cardpoint belong to large US companies, IC Cash is a German company. They rely solely on the proceeds from the fees for withdrawing money, and they do not have their own giro customers to whom they would like to offer a free cash service. The machines are located in frequently frequented locations, in particular train stations, airports, motorway filling stations, shopping centers and in inner-city locations. Bankhaus Lenz and Reisebank are also active in this area.
Postbank has been cooperating with the specialized machine operator Cardpoint since November 2018. Postbank customers can therefore use the girocard to stock up on cash free of charge at 675 selected Cardpoint ATMs. This does not apply to customers of other cash group banks or to customers of Deutsche Bank, to which Postbank belongs. Whether it is a Cardpoint ATM free of charge for Postbank customers can be seen when it is also marked with the Postbank logo. The problem with this is that customers of the other banks, which together form the cash group, could believe that they are using an ATM from their network because of the Postbank logo, but are charged a fee for using it. Therefore, they should better orient themselves to the Cash Group logo in order to use free machines for them. CardPoint sometimes even has the appearance of Postbank machines, some of the machines now have large Postbank stickers and instead of Cardpoint there is "Cashzone", which reads similarly to Cash-Group.

Banks can also provide a nationwide cash supply through the credit card companies Offer. Especially the direct banks, which do not have their own ATM network, have such solutions. Depending on the provider, the cost-free option for the customer is limited to countries or the number of disposals. The bank pays the card company's withdrawal fees at flat-rate wholesale terms. This is convenient for the customer. For a long time it was only important for him that the ATM accepted the card used - this can be recognized by the corresponding logo on the device. However, there are now a few exceptions that we will discuss later. Some direct banks have therefore adapted their communication, on their websites they advertise, for example, with free use of around 90% of all ATMs in Germany instead of a free cash supply throughout Germany. Debit or credit cards from Visa or Mastercard for free withdrawals are issued by the following providers to their current customers: C24, comdirect, Consorsbank, DKB, ING, Fidor Bank, N26, netbank, Santander Consumer Bank, Targobank, Tomorrow, Triodos Bank, Vivid Money and Volkswagen Financial services. And norisbank uses the credit card to enable the free cash service, especially abroad. In this application, credit cards lose their credit function, withdrawals are debited immediately (in the case of monthly settlement by the value date).

The solution became leaky when several savings banks and Volksbanks blocked their machines for such cards from direct banks, even though the devices are intended for use with Visa or Mastercard. Sparkassen and Volksbanken have the densest network of ATMs in Germany and see the direct banks with their account models as free riders. For each withdrawal you will receive a fee agreed with the credit card company - this is, according to the savings banks and Volksbanken, but not cost-covering. The dispute preoccupied many courts and the Federal Cartel Office. Despite points wins for the direct banks' camp, you still come across every now and then Card rejection. In practice, the respective branch institutes usually assume a single vending machine location or a branch in their business area, show its address in the display if the card is rejected, in order to comply with the contractual agreement with the credit card company and basically to provide the card customer with cash. If this is the boycott, not all direct bank customers who waive their fees for third-party withdrawals are not necessarily prevented from withdrawing money, but almost always those from DKB, ING and comdirect. Because of their customer base, these are the primary targets of defense. Some of the smaller branch institutes have returned their credit card license for Visa or Mastercard, which means they can no longer issue a credit card from the respective company themselves, but they also do not have to accept customers who come to withdraw money with such a card. Another variant is to allow direct bank customers to withdraw, but to limit the amount to be paid out to a relatively low amount, so that the total of the fees offset against each other is higher if the customer draws several times to receive the desired amount .

ATM operators can charge a direct customer fee, the so-called Surcharge. Currently, the surcharge is mainly found in some tourist locations abroad and generally in some countries, for example the USA, Thailand and the Philippines. For example, in the United States, many take one to three dollars. Sometimes it is only required for foreign cards. The machine operators are obliged to expressly point out such a fee before payment. Until the payment amount has been confirmed, you can of course cancel the payment process at any time and go to another ATM. The card-issuing banks usually exclude the surcharge from being reimbursed.

When withdrawing in a foreign currency and / or outside the European Economic Area (EEA), an additional charge is required Foreign pay at. It is a percentage fee on the payout amount, usually in the amount of 1.00% to 2.00%. The EEA relevant for the international fee is a free trade area with the currently 28 states of the European Union as well as Iceland, Liechtenstein, Norway. There are small differences to the foreign fee in the price and service lists of the banks: Some banks simplify the regulation and state that they charge the foreign fee for transactions in foreign currency, leaving out the part with the EEA. Others put the transactions in Swedish krona in Sweden and Romanian lei in Romania on an equal footing with those in euros with regard to the exemption of fees, and still others speak little specifically of the "euro area".

At the Conversion of an amount withdrawn in a foreign currency perceptible differences can arise. To convert an EEA currency (for example Danish kroner, Polish zloty, Swedish krona, Czech krona) into euros, the EU price regulation requires banks to use the last available reference rate from the European Central Bank. However, banks are allowed to add a surcharge to the reference rate, it must be shown. The banks usually show it as a percentage in the list of prices and services or online in an exchange rate calculator; it is constant or variable, the same or different for all EEA currencies, often around 0.20% to 0.80%. The exchange rates of non-EEA currencies such as the US dollar are not regulated by the regulation and usually include spreads. The card-issuing institutes do not use a standardized rate here; the rates are determined by the respective credit card company, by the card-issuing institute themselves or by another organization. Something like surcharges are therefore also included, just not transparent. As a rule, however, exchange rates are cheaper than the currency exchange rates used when exchanging cash. It is very important to avoid a list at some foreign ATMs: The operators are increasingly allowing customers to choose between debiting in the local currency or in the currency of the card account recognized by the card. Here you should always choose the local currency charge. The machine display is often designed in such a way that customers are tempted to press the button to convert into euros. The conversion is then done by a third party, the operator of the machine, the exchange rate determined by him is usually much worse than the rate of the card-issuing bank. In addition, he often requires a steep percentage conversion surcharge.