What are house stones made of 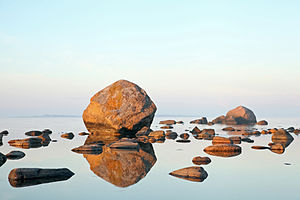 Large boulders - they are often simply called "stones". You can see them on the Baltic coast of Estonia.

Rocks are also often called stones. The expression “rock” is used in geology. This science deals with how the earth is built and how it evolved. Anyone who speaks of “rock” is more likely to mean the type of material. A stone is more like a single piece. One also speaks of boulders or rock if the pieces are even larger.

Different rocks are differentiated based on their material, color, hardness and other properties. Based on the formation one can recognize relationships among the rocks. There are precious stones too. They are especially valuable because there are few of them or because they are very tough. There are more semiprecious stones, so they cost less. However, individual minerals such as quartz are not counted as rocks.

Stones are differentiated based on their size and shape. Grains of sand are very fine or rather fine and always no more than two millimeters in size. Anything between two millimeters and about six centimeters is gravel. The individual parts are then also referred to as pebbles. They can be square or round, if the water has honed them that way. Rubble contains even larger chunks.

The entire earth, i.e. our planet, consists of rocks. Most rocks consist of different components, the minerals. But there are also exceptions: Lime, for example, consists exclusively of equal parts. In addition, there are at most a few impurities.

How are rocks formed?

These rock layers were created as deposits in a lake or sea. They almost look like a man-made wall.

The best way to observe the formation of a rock in a volcano: hot magma emerges, this is called lava. It cools down and solidifies to rock. Then it depends on what exactly the lava consisted of and how quickly it cooled down. Under certain circumstances, the rock then becomes hard as glass. Usually, however, it is just so hard that it is well suited for building buildings.

Much more often, however, magma slowly solidifies in the earth's interior. The different minerals then regularly lay next to each other. For example, granite is made from the minerals feldspar, quartz and mica. Granite is very hard and durable, which is why it is often used for curbs, which are also called curbs, curb stones or curb stones. You know them well from the roadsides.

In nature, however, literally no stone is left unturned, at least if you allow a lot of time. Rocks weather, that is, they are removed by wind, water or ice. Streams and rivers take the sand and debris with them and deposit them in a lake or sea. This deposit is called "sediment". If the layer is thick and heavy enough, it can solidify into a new rock, a sedimentary rock. This is how sandstone is created, for example. It is less hard and durable, but is still often used for buildings, for example churches. Often such stairs are stepped heavily over the centuries.

Then there are the meteorites that come from space. This is again a special type of rock that often contains other minerals and metals that hardly exist on earth.