What do you think of this statement

The verdict - what do you think of me?

What do you think of someone just because of their looks?

A social experiment investigates this question and reveals prejudices in the process.

"Condemned, disabled, gay, radical" is the title of a social experiment on YouTube that shows how easily we judge someone and what role prejudice play in it.

Judge someone based on their looks

Ten young people have to judge four other young people just by their appearance and then justify their judgment. A moderator reads out different statements that really apply to one of the four people.

The statements are, for example: "I was forcibly married", "I was once radical myself", "I am blind" or more neutral things like: "I wrote a book" or: "I teach yoga."

The other ten test participants have to guess without prior knowledge which of the four people might have made this statement. The four people are not allowed to say anything. The others have to face the person who they think the testimony might have come from.

When everyone has positioned themselves, the person who actually made the statement gives a show of hands. The results are surprising and show how quickly we can judge someone based on just small characteristics.

At the end of the experiment, the four “condemned” have their own say. They tell how they felt during the experiment and give touching insights into their everyday experiences with discrimination and racism. 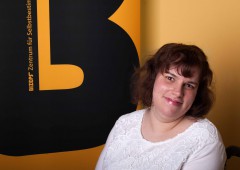 "Since 2012 I have been a trained curative and integrative pedagogue with a focus on gender studies and psychoanalytic pedagogy. Since 2016 I have been working for BIZEPS - Center for Self-Determined Living. ..."

This is where the advertising area begins

This is where the advertising area ends
<?