What makes steel hard and strong

One of the most important ways steel is treated is hardening. When hardening steel, the structure of the metal is transformed in such a way that the mechanical resistance of the metal increases. The hardening process requires that you apply heat to the workpiece and then cool it down quickly.

When a workpiece made of metal is plastically deformed, this results in dislocations - i.e. lattice defects in the crystal - in its interior.
If the strength of the workpiece is to be increased, measures must be taken to avoid the movements leading to dislocations as much as possible.

When cementite (Fe3C) is dissolved, the carbon it contains is dissolved in the austenite. If the carbon-enriched austenite is then quenched, the segregation into cementite and ferrite is prevented. The carbon atoms are held in place and the iron lattice is prevented from changing into the body-centered cubic α-iron. Instead, a tetragonal-distorted and body-centered cubic lattice (martensite) is created, which is braced by the carbon.

With this type of hardening, it is particularly important to maintain the correct cooling rate. The greater the temperature difference or the subcooling, the more martensite is formed. The rate of conversion depends on the choice of cooling media used, such as oil, water, oil, pure gas or air. The chemical composition of the steel also plays an important role. Because of its high diffusion speed, carbon makes a significant contribution to the hardenability of the steel. In contrast, substantial alloying elements such as chromium determine the hardenability of the material. With small components and high quenching speeds, you can achieve full hardening across the entire cross-section of the tool.

In order to successfully harden steel, however, the workpiece must always contain at least 0.2% carbon. 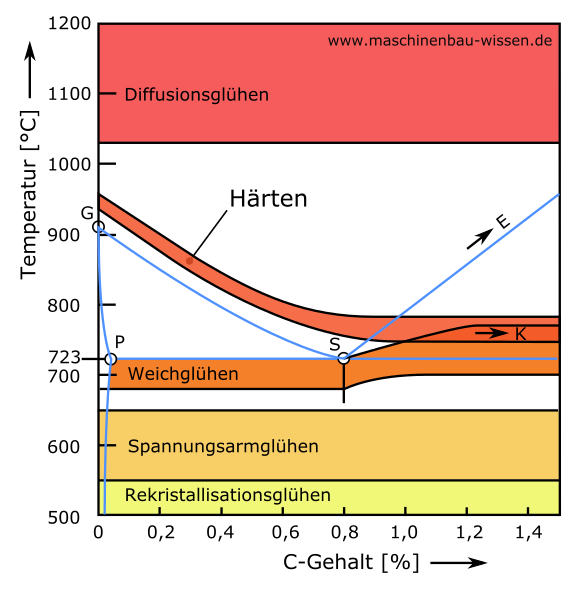 Hardening and annealing as a function of temperature and carbon content

As a further possibility for alloying, the elements involved can form a common crystal, which, however, has no resemblance to crystals from the crystal system of the basic elements, so that a separate, comparatively complicated system of crystals is created.

Alloying is the most common method of introducing foreign atoms into steel. In addition, foreign atoms can also be introduced into steel by nitriding. In comparison, carbonitriding is a mixture of precipitation and transformation hardening.

Sliding processes to increase strength can be hindered by increasing the dislocation density in the structure, a process known as work hardening. This is used particularly in the production of non-ferrous metal alloys such as bronze and mixed crystal alloys.

When hardening by quenching, it should be noted that only steels with a proportion of more than 0.35% carbon (C) are suitable for this process.

If the hardening is extended by heating and quenching by a subsequent tempering, it is also referred to as quenching and tempering. Special steels are particularly suitable for this process, which are known as quenched and tempered steels due to the heat treatment that can be used. 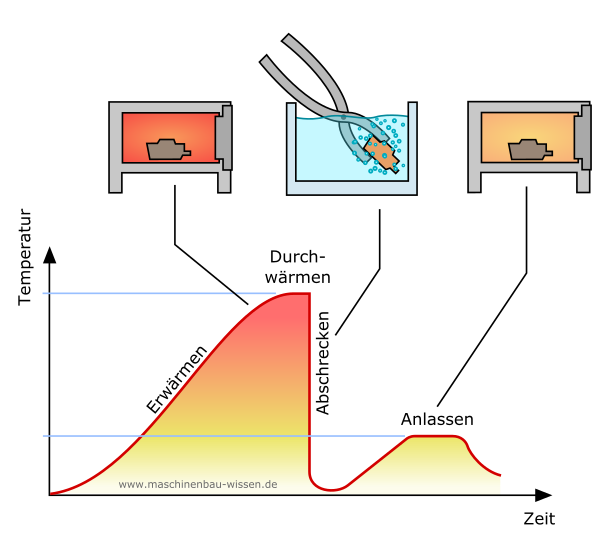 The through hardening of steel is a common application. One speaks of through hardening when the martensitic hardening is to have an effect over the entire material cross section. In the case of workpieces with larger dimensions, the desired through-hardening can only be ensured if the values ​​inside the workpiece do not fall below the critical values ​​for the cooling rate.

The achievable values ​​for hardness and strength in martensitic hardening depend on the temperature and duration of the austenitization, the composition of the steel and the dimensions of the workpiece.

You can vary the critical cooling rate considerably by choosing the alloying elements added to the steel.