Why are planets different in size

The earth compared to other planets

Let's take a look at the earth - from a perspective in which the entire solar system is included and our planet is compared with other celestial bodies. 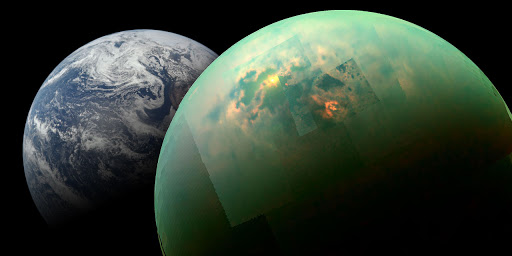 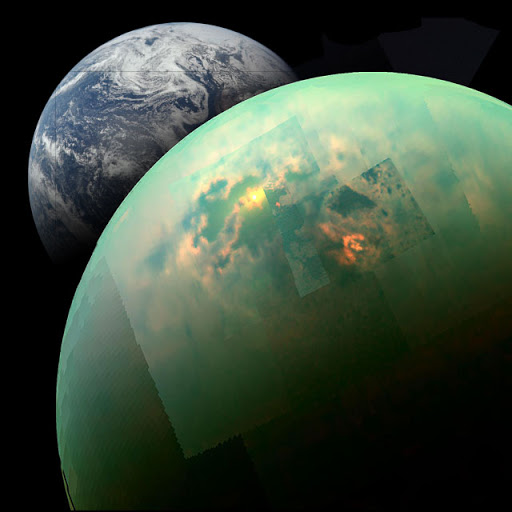 Which celestial bodies will we encounter on our journey? The earth encompasses different environments. There are differences in water, air and temperature both in the sea and on land. Because of these conditions, our home planet is seen as something special - even when compared to other celestial bodies that make up the solar system. But is the earth really something special? Doesn't it really have any resemblance to other planets that formed at the same time as itself - about 4.6 billion years ago? Researchers try to get to the bottom of this mystery in countless studies by collecting scientific data using a variety of methods. These methods include, for example, the use of telescopes, spacecraft and surface probes. This enabled several celestial bodies to be discovered whose properties are similar to those of the earth. On this tour we will explore our planet with a view of comparable objects in the solar system. Because in fact the earth, which we always regard as something special, resembles the other planets in many ways. So let's go on a journey to discover these similarities - and the stories behind them.

Like Earth, Jupiter is one of the planets that have aurora borealis. This occurs when solar wind plasma penetrates a gap in the planet's magnetic field and collides with the atmosphere. But now the magnetic field of Jupiter is much stronger than that of the earth. In addition, there is the energy of the volcanic gases from Jupiter's moon Io. As a result, the aurora borealis of Jupiter is a hundred times brighter and more intense than that of the earth and so extensive that the earth could be completely covered with it. The color of the aurora borealis on a planet changes depending on the components that make up its atmosphere. In Jupiter, it consists mainly of hydrogen, which makes the aurora light a bright pink when viewed with the naked eye.

At 8,800 m, Mount Everest is the highest mountain on earth. However, if you take the height from the sea floor as the starting point, Mauna Kea in Hawaii is the highest peak at over 10,000 m. A large amount of magma was released from the deep mantle on the surface of the earth, creating such a huge mountain. And then there is Olympus Mons on Mars, which at around 27,000 m is the highest mountain in the solar system and whose base extends over 550 km. Unlike on Earth, there are no actively shifting plates on Mars. Therefore, it is assumed that the excess magma erupted again and again at the same point where this gigantic mountain was able to form. Bathymetry data source: Synthesis of multibeam bathymetry and acoustic backscattering in the main Hawaiian islands

The tundra is an area near the Arctic Ocean that is affected by permafrost even in summer. One of the typical predominant topographies here is the ice wedge. In this so-called terrain, the ground is divided into several polygons and permanently frozen. If it tears open in this state, the melt water from the layers close to the surface collects in the cracks and freezes there. If this process is repeated, a special shape of the frost pattern floor is created - a network-like arrangement of ice wedge polygons. A landscape very similar to this soil structure with its polygonal patterns was also discovered in the arctic region of Mars. Researchers are still looking for an explanation for this topography.

Many celestial bodies have one topography in common: the crater. This is nothing more than a trace at the point where an object hit the planet. On Earth, craters are gradually disappearing due to weathering and erosion. On the other hand, they remain in their original form for a long time on celestial bodies without air and water. This fact is particularly evident in the impact basin Caloris Planitia on Mercury. It is one of the largest craters in our solar system, with a diameter of over 1,500 km. On earth, too, the signs of an impact can remain relatively clear, provided that it occurred in dry desert areas. The Barringer Crater in the American state of Arizona is a good example of this. It was formed about 50,000 years ago, about 1.2 million kilometers wide and 180 m deep.

How was it comparing planet earth to other planets in the solar system? This time we only dealt with a small part of the matter. Not far from Earth, however, there are a multitude of similar topographies and interesting environments on other planets and moons. As research advances, new discoveries will follow in the future. By exploring the celestial bodies in the solar system, secrets related to the formation and development of our planet and the origin of life are revealed. In addition, this venture can help us figure out how to make life on earth better. The perspective of the earth, life and the universe that results from crossing the boundaries between planets is the prerequisite for our future. You exceeded those limits on this tour. Now it's up to you to explore and discover even more.

It was once assumed that all the water on celestial bodies far from the sun was frozen. However, moons belonging to both Jupiter and Saturn were discovered, on which, due to the heat inside the satellites, melted ice forms huge seas. With the help of space probes and the subsequent investigation of the composition of steam that rises from cracks in the ice, indications of a possible hot underwater source on the sea floor were found. Life may also exist around the hot spring, which is said to be at the bottom of the sea of ​​Saturn's moon Enceladus. A similar underwater hot spring also occurs in the depths of our seas. Not only are there unique ecosystems there, but it is also believed that the first life on earth originated here. A lot of such underwater springs have been discovered in the Rodriguez Triple Junction area in the Indian Ocean, particularly where the three plates meet. Original data on plate boundaries: Peter Bird (2003)

There is plenty of water on earth. Many species originated in this element, whose cycle includes rain, rivers, seas, evaporation and clouds. The water goes through the same stations on the moon Titan, which belongs to Saturn - only that it does not appear there as water, but as methane. Due to the relatively short distance of the satellite from the sun, methane could occur in liquid as well as gaseous form in the surroundings that characterize it. A closer look at the surface of the titanium reveals not only rivers and lakes that resemble those on Earth, but also clouds from which rain falls. Perhaps there will also be unknown life.

Our home is a very special planet within the solar system thanks to the water, the air and the life that thrives everywhere. But are other planets really that different? Let's take a look at the earth - from a perspective in which the entire solar system is included and our planet is compared with other celestial bodies. 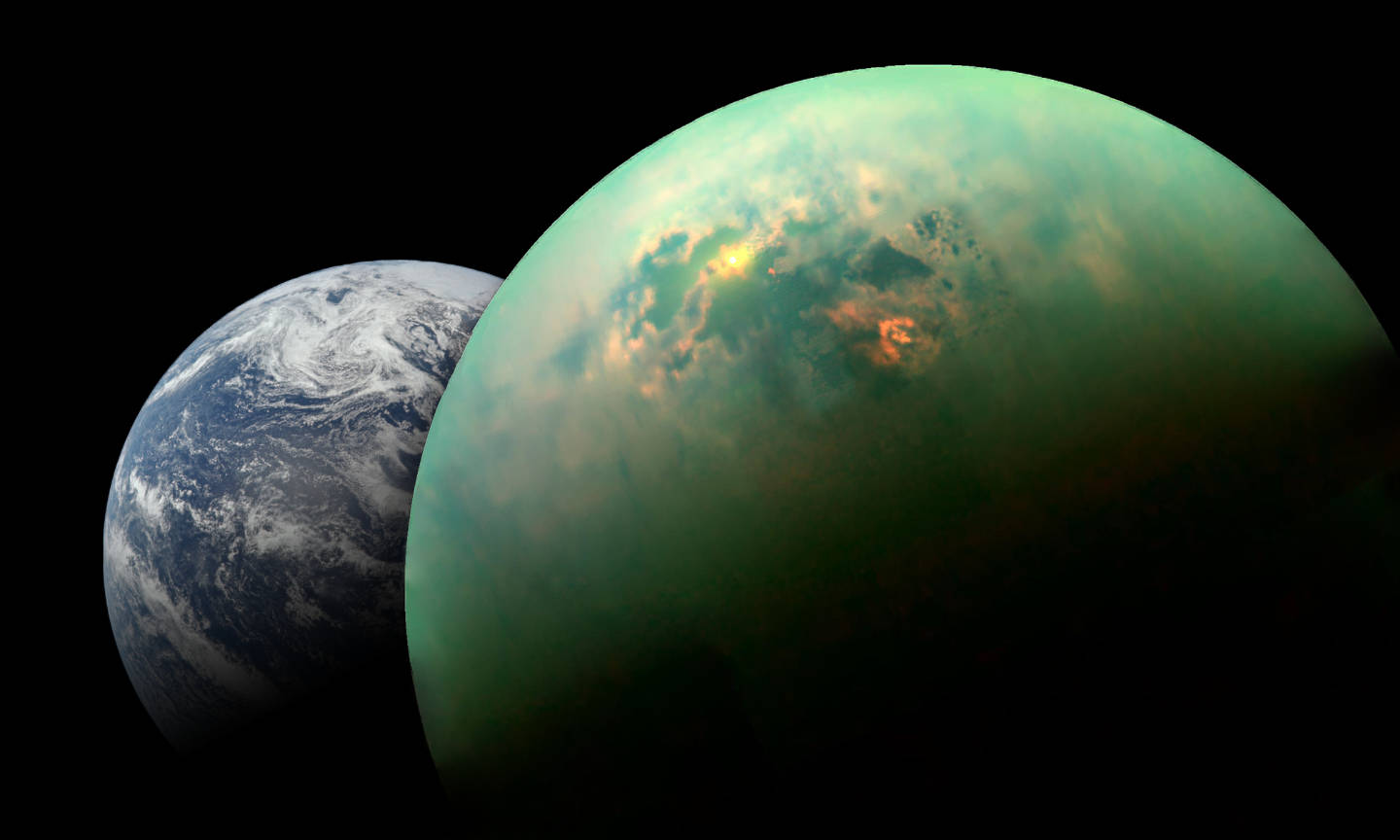 One of the topographies volcanoes create is the caldera. It is a large indentation in the terrain that is formed by a collapse and accompanied by a massive eruption. Many volcanoes and calderas are found on Venus. Especially at the summit of Maat Mons, the highest volcano on Venus, there is a gigantic caldera about 30 km in diameter. It is thought it was made by small repeating collapses. There are many calderas on the Earth but Mt. Aso, in particular, is quite distinctive. The caldera isn't just the depression of the summit, but also the huge round hill that spreads around Mt. Aso. It was formed by frequent eruptions that occurred in the past. People built a city and now live in the caldera that extends 18 km east to west, and 25 km north to south.