When will the Microsoft Hololens be affordable?

Microsoft HoloLens in the test: available in Germany from November! 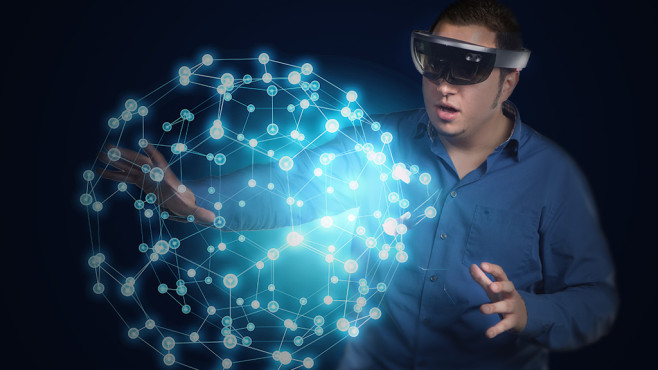 With the HoloLens, Microsoft is already working on tomorrow's technology today. COMPUTER BILD bought one of the rare glasses and dared to take a look into the future.

As part of its October event, Microsoft presented the timetable for the coming months with the “Creators Update”. Accordingly, the topic of 3D is high on the list of the group. What does this have to do with the HoloLens? During the hour and a half presentation, Megan Saunders, General Manager at Microsoft, devoted only a few minutes to the data glasses, but the HoloLens is the key to bringing 3D content to life. To this end, the group is improving the software, for example with Paint 3D. The Edge browser gets 3D support and is being expanded as part of the HoloLens operating system. With the next Windows 10 update, the HoloLens should also be able to display virtual realities.

HoloLens is coming to Germany

The first developer model of the HoloLens left a lasting impression on the COMPUTER BILD editorial team, and the testers were impressed by the unusual perspective into the interior of the augmented reality world. So far, looking through cyber glasses has only been reserved for a few selected developers and users from the USA and Canada. For Otto-Normal-Techie from Germany there was no way to test the HoloLens in the living room at home. That is now changing: From November onwards, anyone can order glasses from Microsoft - including in Germany. However, there are two small catches: Microsoft is charging a whopping 3,299 euros for the so-called Development Edition, which is aimed primarily at app developers. 5,489 euros are due for the “Commercial Suite”; In addition to the scope of functions of the Development Edition, it contains further features for business customers, including security functions and the ability to manage multiple glasses in a network.

You can read what the HoloLens can do in the following practical test.

HoloLens in the test

Florian Haspinger walks excitedly around an empty table, as if it were a sensation. The other people in the room can only see a bare piece of furniture, but in front of the eyes of the start-up founder of Holo Light, the entire solar system is currently building up over a table. The HoloLens from Microsoft, which Haspinger wears on his head, enables a view of this additional, virtual reality in the actual environment.

HoloLens in the COMPUTER BILD check

Microsoft HoloLens: Technology for the Terminator

These cyber glasses project holograms, multimedia content or information into the field of vision. The wearer does not completely immerse himself in what is known as virtual reality (VR), instead he experiences an augmented reality - just like the "Terminator" in the science fiction classic of the same name, which also uses augmented reality (AR) to display information about its environment got. Florian Haspinger is of course not working on the world domination of robots, but on possible applications for Microsoft's glasses. Haspinger is one of the first in Europe to own a HoloLens and is convinced: “This is the future.” But what can it look like? COMPUTER BILD tried the $ 3,000 developer version. 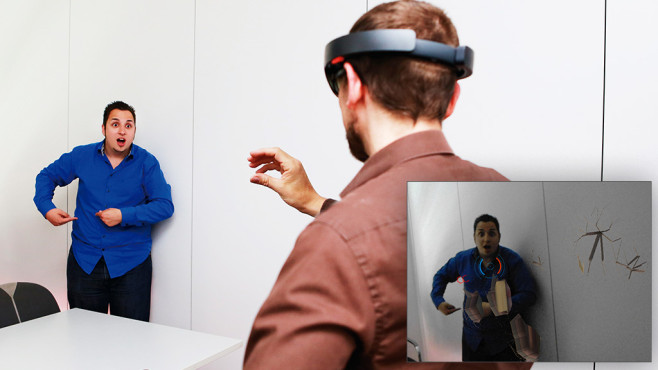 Seen from the outside, the situation seems strange at best, but by no means special in any way. The mix of real and virtual world can only be seen with the HoloLens on.

VR and AR - the differences

When it comes to future trends, virtual reality (VR) and augmented reality (AR) are often mentioned in the same breath - although both technologies are completely different. The biggest difference is the perception of the user: With VR glasses, he is completely immersed in an optically and acoustically virtual computer world that can be experienced 360 degrees. He is completely sealed off from the real outside world. With augmented reality, the user continues to perceive his or her surroundings, which, however, are enhanced with virtual content using computer-controlled glasses - for example, 3D objects on the table or information displayed.

The different glasses at a glance

1: So far only available as a developer version // 2: Camera for AR available, but hardly any apps available // 3: Uses the loudspeakers in the smartphone // 4: Sales ended in 2015

Without any cables or PC

Whoever puts on the glasses sees two or three-dimensional projections. Depending on the application, it can be aggressive robots, a brand new car or the solar system. In contrast to the previously usual VR glasses, the HoloLens does not have to be connected to a powerful PC by cable - instead, the entire technology is housed in the compact glasses frame. Whereby “compact” is in the eye of the beholder: At 580 grams, the HoloLens is not a lightweight. But because the heavy weight is evenly distributed thanks to the additional headband, longer explorations of augmented reality are also possible. After two to three hours at the latest, however, it is over because the battery then needs fresh juice.

Can Microsoft's HoloLens change the way we view our lives and the gaming world? COMPUTER BILD has tried out the AR glasses and is looking to the future.

Microsoft HoloLens in a first look: tried out cyber glasses!

The technology of the HoloLens

In front of the forehead there is a mini PC in the glasses frame, which forwards the AR content to two small displays. These in turn transmit the image to four lenses that project it onto both eyes. This compact design is also desired for VR glasses - without the "umbilical cord" to a PC and other tangled cables, the experience is much more intense, the boundaries between reality and the illusion in the field of vision quickly become blurred. Florian Haspinger has meanwhile familiarized himself intensively with all the details of Microsoft glasses, "but a doctor in physics is probably necessary for a complete understanding," says the physicist himself. Incidentally, the technology is partly based on patents of the former cell phone giant Nokia, whose cell phone division Microsoft bought five years ago. 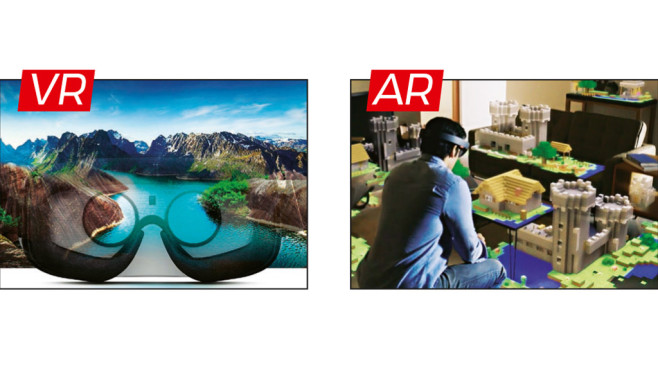 While the view through VR glasses completely draws the viewer into a virtual world, AR technology enriches the real environment with computer graphics such as castles and trees.

The fact that the HoloLens is based on Windows 10 has a clear advantage: "If apps run there, they also work on the glasses," explains Haspinger. But then not as an elaborately programmed 3D image, instead the illusion sticks to the wall like a poster. The first practical test already showed the enormous potential of the HoloLens: For example, if the user watches a YouTube video and would like to see it larger, he can enlarge it with the appropriate movements of his head and fingers - the viewer takes it like a video on a large one Canvas true. If he has fixed the picture in this way, it will stay in the same place even with rapid head movements. So far, however, the control options have been modest - in addition to the virtual right-click, which enlarges the picture in the example, there is only one hand movement to open the menu and confirmation by moving the head.

Another weak point of the development version is its limited field of view - it corresponds roughly to looking at a 55-inch television from a distance of 2 meters. When the HoloLens hits the market, it definitely needs a larger projection surface for its augmented reality. The slightly pale colors and transparent objects also take getting used to, especially in bright ambient light. In addition, some users notice annoying rainbow effects when moving their heads quickly. The display quality is already flawless, the two full HD displays ensure a sharp picture. Pixel grids or individual pixels cannot be seen at the high density of 40 pixels per inch - a 55 inch Full HD television has the same pixel density.

“At first I was disappointed with the weight and the small field of vision. But the holograms and the possible uses inspire me! "

Whether as an entertainment medium, an additional eye in medicine or as a virtual cockpit in a networked car - the HoloLens has enormous potential. Especially since the apps tested already run mostly smoothly with up to 60 frames per second and therefore do not cause any nausea. There is still a long way to go before it is ready for the market. Only when Microsoft offers a lighter model with a larger field of view at an affordable price will the HoloLens really be the future.
<?