Is the palace of Madrid worth the trip 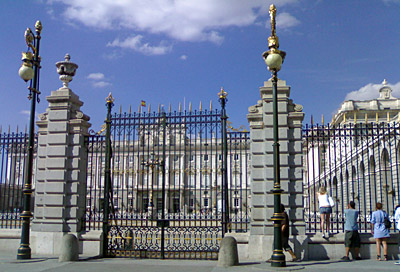 Although the enormous building of the royal palace dates from the 18th century, the beginning of the history of Madrid is connected to this place. This is exactly where the Muslims built theirs in 856 Alcazarwho have favourited the military fortress and residence of the military governor. With this military installation it was also the strategically important garrison town lean or mayrit born, almost impregnable because of its location surrounded by steep slopes. The Arabic name means “place of many waters”, unbelievable when you consider the pathetic course of the river that flows by not far Manzanares look today. But more than a millennium ago the Manzanares was still a real river and the settlement area was criss-crossed by numerous underground watercourses.

Practical tips on: Palacio Real and Plaza de Oriente
get it here ...

Plaza de Oriente 2, Tel .: 91 - 541 39 74, open all day, 50 - 75 euros per person
Café located directly at the Plaza de Oriente and in summer one of the most beautiful street cafés in Madrid with the best view of the Opera and the Royal Palace. Touristy, but still worth seeing. In the Cocido restaurant as a specialty.

calle Bailén, Tel .: 91 - 454 88 00, Monday to Saturday 9 a.m. - 6 p.m., Sunday and public holidays 9 a.m. - 3 p.m., admission 8 euros (with a tour 10 euros), free entry for EU citizens on Wednesdays.
The palace, which was completed in 1764, is definitely worth a visit with its huge dimensions. Above all, the collection of paintings with a number of Goya works and the Asian salon from the early 20th century are recommended. Please note, however, that guided tours in German cannot be reserved in advance. Go straight to the cash register and the entrance and hope that a guided tour in your local language will be offered at this very moment. If not, there is still the audio guide to guide you through the interior of this structure.

calle Bailén 19, Tel .: 91 - 559 53 32, closed on Wednesdays, 15 - 25 euros per person.
Very atmospheric tavern with an unbeatable view of the Palacio Real. Here you can enjoy one of the most beautiful Madrid postcard motifs while drinking one of the many wines from the extensive wine range - and all at moderate prices. Torrijas (the Spanish version of the "poor knight") as a specialty.

Plaza de Oriente, Tel .: 91-516 06 06
This building from the mid-19th century has been used exclusively for operas again since the 1970s. In summer, free concerts by well-known singers take place on the terrace facing the Plaza de Oriente. Maybe you will be lucky with your stay.

The Muslim military palace was changed more and more in the centuries after the conquest of Madrid by the Christians in 1085 and under the Habsburg rulers Charles I, Philip II, and Philip III. converted into a spacious residence.

But on Christmas Eve of 1734, of all things, the building burned to the ground. Evil tongues were quickly at hand with the rumor King Philip V (1700-1746) personally had the fire started. Indeed, the first Bourbone who came to the throne through the War of the Spanish Succession 1701-1714 found the Habsburg Madrid and especially the Alcázar old-fashioned, not too elegant and dirty. As the grandson of the Sun King Louis XIV, Philip V was used to palace complexes like Versailles, whereas the Madrid Royal Palace looked like a draughty construction site. Too bad that with the old Alcázar not only a palace burned down, but also part of an imposing art collection that the Habsburgs bought together in the 16th and 17th centuries. 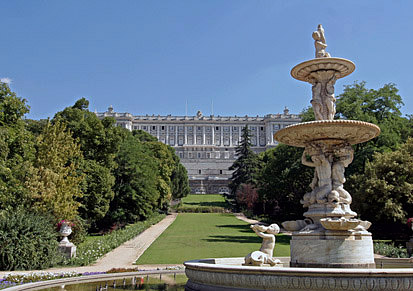 After a good thirty years of construction, the new Palacio Real was completed in 1764, in its current, very simple and square shape. Significantly, the Bourbon royal palace was also a compromise solution, the result of empty state coffers. Originally, a new building of almost pharaonic proportions was planned further north of the city. The “compromise solution” was anything but modest with a total area of ​​135,000 square meters. Inside, the current palace is well worth seeing, there are several Flemish tapestries from the Habsburg era, pompous ceiling frescoes by the rococo artist Giambattista Tiépolo as well as several Goyas to admire.

The royal palace is no longer inhabited by the royal family, not least for security reasons. The Spanish Bourbons reside in the further west Palacio de la Zarzuela, much more secluded from the hustle and bustle of the big city. Only on important occasions such as receptions of high-ranking politicians or wedding celebrations and kisses (most recently in 2004 between the heir to the throne Felipe and his wives Leticia Ortiz) the Palacio Real comes into action again as a backdrop.

However, the ruling dynasty of the Bourbons is not undisputed. It is true that the royal family is repeatedly met with a wave of sympathy at official receptions from the population. But at the same time it is not forgotten that the Bourbon monarchy was only created by the hated dictator Francisco Franco was reinstated in office and dignity. According to the will of the dictator, Spain has been a monarchy again since 1975, albeit with a monarch largely limited to representative functions.