Why is it difficult to make risotto

Don't be afraid of risotto

Heat the broth and keep it piping hot. Grate the parmesan and set it aside for later. 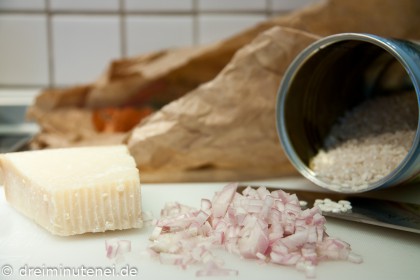 Peel the shallots and dice them as finely as you can. Sauté them in the olive oil until translucent.

Risotto rice is a special variety. It doesn't work with other rice - it either becomes mushy or remains too hard.

Add the rice and let it sweat for a few minutes. Stir occasionally until the rice grains are coated with a thin layer of fat.

Deglaze with a dash of white wine. It depends on the acidity - you can also have a few dashes of lemon juice.

Now pour about a third of the boiling broth over the rice and reduce the heat until everything just simmers. Stir occasionally so that nothing burns.

After about 10 minutes, the liquid will be almost completely absorbed by the rice. Pour in the second third of the broth. It has to be hot so that the cooking process is not interrupted. Don't forget to stir it occasionally and let it simmer for another 10 minutes.

Now you need some feeling. Risotto is moody - sometimes it's done after 25 minutes, sometimes not until after 35. I haven't met anyone who could explain to me why that is. So you have to try: when the rice is soft on the outside and still has a "bite" inside, the risotto is ready. If the rice is still too hard for you, let it simmer again. If necessary, add the stock and stir.

At the very end you stir in the grated Parmesan. Pour in a little more broth if the rice gets too tough. Good risotto is soft on the outside, almost a bit slimy, and still has a small hard core on the inside.

You can conjure up an infinite number of variations from the basic recipe: with saffron it becomes a classic one Risotto alla Milanese and goes perfectly with ossobuco as a side dish. Or you can add a few diced and fried porcini mushrooms just before the end. Or seafood. Or or or ...

Many easy-to-cook vegetarian risotto variants can be found, for example, in Risotto: 30 delicious vegetarian recipes from Italian cuisine

from the Hädecke publishing house (2009).