What is a robot 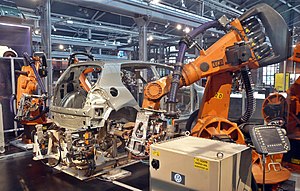 Robots don't always have to look like humans. These guys are assembling a car in a factory.

A robot is a machine that can be programmed and mostly performs movements. The word comes from the Czech language and means something like "slave". He always has to follow orders and is not allowed to determine anything himself. The word robot was used in science fiction novels long before the first robots. These are fictional stories that take place in the future and, as in "Star Wars", in space.

A robot is much like an automaton, except that many robots can go from place to place. Also, they can do difficult things, some can even work in a similar way to humans. Robots also have eyes and ears of sorts. This enables them to recognize what is in their environment. With sensors, for example, they can recognize colors or measure temperatures.

The first robots were used in industry to do simple jobs that were repetitive. For example, they bend sheet metal for cars or place a component in another location. Today there are walking, rolling and flying robots. Flying robots are also called drones.