Emotions are chemicals and hormones

Love is biochemistry - and what else? 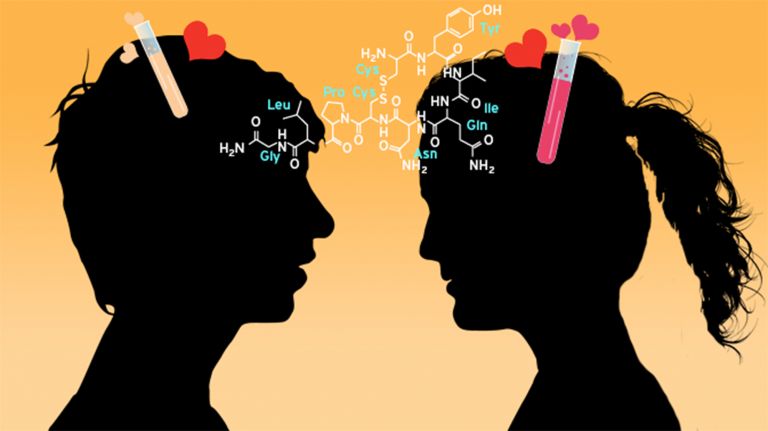 Falling in love sets off chemical fireworks in the brain. And even if the storm of emotions later subsides, hormones play an important role. Does that say everything about one of the great mysteries of our lives?

In 2005, Italian scientists led by the physician Enzo Emanuele from the University of Pavia researched the so-called nerve growth factor in various test subjects. The protein is essential for keeping the brain “young”, necessary for the life of neurons and the growth of dendrites. The researchers examined 58 people who were newly in love and compared them with subjects who were not in love and those who had been in a relationship for a long time. The concentration of the nerve growth factor in the blood plasma of the newly in love was higher than that of the control groups. As the researchers suspected, this could be related to the feeling of euphoria of being in love.

It may be astonishing at first: If you fall in love, the testosterone level in men first falls, and in women it goes up. This was found out by psychiatrist Donatella Marazziti and endocrinologist Domenico Canale from the University of Pisa in 2004. One possible explanation could be that the sexes become more similar in behavior during this phase, the researchers believe.

The scientific view of romantic love is a sober and not infrequently sobering: The feeling that makes butterflies flutter in the stomach of freshly in love is in his eyes simply the result of a skillfully mixed hormone cocktail. The intimate love between two people - just an evolutionarily useful illusion to ensure reproduction. But how much does science actually know about the most powerful force in our lives?

If you believe evolutionary psychology, with the invention of romantic love, nature reached deep into its bag of tricks to ensure the survival of the human species. As their brain grew larger and larger in the course of their development, the offspring were dependent on their parents for longer and longer. Therefore love and the couple relationship are practical devices of evolution so that both parents take the offspring under their wing for a long time. This is how the psychologists Lorne Campbell from the University of Western Ontario and Bruce Ellis from the University of Canterbury argue in the "Handbook of Evolutionary Psychology".

Love is not a matter of the heart

The scientific dissection of love is still in its infancy in many ways. But one point of view has already changed radically: Love is only a matter of the heart in art and in our subjective experience. Because in the meantime researchers have identified the brain as the actual place of romantic events.

Neuroscientists Semir Zeki from University College London and Andreas Bartels, today at the Max Planck Institute for Biological Cybernetics in Tübingen, did pioneering work in this area. Using functional magnetic resonance imaging, they examined the brains of 17 test subjects. Once they showed pictures of their partners to those who were seriously in love, and another time photos of friends. As it turned out, at the sight of the dearly loved one, it was primarily the limbic reward system that started. (Mainspring of doing)

At the same time, however, some areas also reduce their activity, such as the prefrontal cortex. It is important for rational decisions. In addition, a network around the temporoparietal junction slowed down its activity. It is usually responsible for evaluating other people socially. Some neuroscientists see this as confirmation of the everyday experience that lovers often act headlessly. And Bartels and Zeki also suspected a possible neurobiological explanation of why love is blind in their results.

That sounds plausible at first. The only problem is that it is scientifically tricky to deduce what is psychologically going on in a person's head from the activation patterns in the brain. This was emphasized in 2003 by a team led by psychologist John Cacioppo from the University of Chicago in a review on the approach in social neurosciences. Despite such concerns, the interpretation of brain activity continues to this day.

In 2012, the neuroscientist Stephanie Cacioppo from the University of Geneva and colleagues brought together the findings of brain research on romantic love. The result: Passionate love ignites areas of the brain that are associated with euphoria, reward and motivation. Since these regions also move under the influence of opiates or cocaine, it is clear to many researchers that love and addiction are probably not so dissimilar. Concordia University psychologist Jim Pfaus puts it this way: “Love is actually a habit that arises from sexual desire, since desire is rewarded. It works in the brain in the same way as when people become addicted to drugs. "

A look at the hormones seems to prove him right. Especially in the tingling phase of being in love, the neurotransmitter dopamine floods the brain. Released from the hypothalamus, the most important source of hormones in the brain, dopamine mainly acts in the limbic system mentioned above. In the vernacular, the messenger substance is already regarded as the happiness hormone. And it actually plays a role not only in brain rewards and euphoria, but also in addiction. (Addicted to love)

While the dopamine level increases in the intoxication of feelings, another messenger substance decreases: serotonin. The serotonin levels of lovers are similar to those of people with obsessive-compulsive disorder, initial research has shown. It is not only the neuroscientist Semir Zeki who claims: “In the end, love is a form of obsession.” In the early stages, it generally paralyzes thinking and directs it in the direction of a single person.

So love is a form of obsession. That also sounds plausible at first. After all, who doesn't know how thoughts revolve around one person. But this interpretation is not only once more speculative, it also has another catch. According to all that is known, the serotonin system actually plays a role in love. But according to an overview study from 2009, it is not certain that the serotonin level of people who are romantically in love always falls.

After the stormy months of a new love, couples gradually find their way to calmer climes. This is where the hormone oxytocin comes into play. Produced in the hypothalamus, it is increasingly released in phases of romantic attachment. Oxytocin ensures trust in other people, determines which people we find particularly attractive, and promotes long-term relationship and loyalty. Not only in humans, by the way: prairie voles actually tend to monogamy. However, if you block the release of oxytocin, the small rodents change partners more frequently.

So when it comes to love and bonding, is it all a question of having the right neuro-cocktail in the brain? And could one - at least in theory - make someone fall in love with anyone with the help of a modern aphrodisiac made from the body's own opiates and oxytocin? The social psychologist Manfred Hassebrauck from the Bergische Universität Wuppertal does not believe that. “You will then feel really great, you will also feel more energy and you will be happy. But whether you are in love is a completely different story. ”This also includes the cognitive aspect of love. “And a person who we perceive as one who corresponds to our wishes.” The biopsychologist Beate Ditzen sees it very differently: “We don't have such a cocktail at the moment.” But the fact is that a biological cocktail is in us trigger the feeling of being in love with a certain dynamic. "That is the consequence and not the cause," believes Manfred Hassebrauck, on the other hand.

What sometimes falls under the laboratory bench all too quickly in scientific work: Love is a very complex phenomenon with many facets. This is reflected more strongly in psychological models than in neurobiological models. A well-known one comes from the psychologist Robert Sternberg, the so-called triangular theory of love. In addition to emotional and motivational aspects, which often dominate scientific work, Sternberg also emphasizes a cognitive aspect. It consists in the rational decision to love and bond with someone.
Many scientifically oriented researchers are also fundamentally aware of this complexity of love, which cannot be easily reproduced under artificial laboratory conditions. Love is a complex sensation, emphasize brain researchers Andreas Bartels and Semir Zeki. And it is difficult, if not impossible, to untangle them.