Is there any exterior automobile design 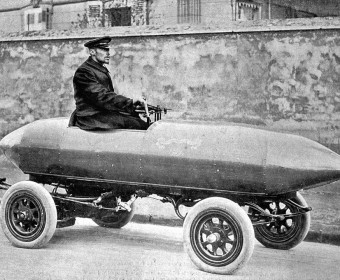 When the automobile came into being around 1890, its designers were happy to have put a functioning driving machine on the three or four wheels; they weren't thinking of a design in the sense of surfaces, sheet metal, cladding. Just as the technical layout of the car was often based on the carriage and sometimes on the construction of bicycles, at first you didn't know what a car should look like - there was still no design.

It took a long time - almost 30 years - to understand that the car as a land vehicle is subject to the laws of aerodynamics. This means that a car, depending on its frontal area and a value resulting from its shape, has better or worse air flow through it.

The first car that had a kind of »body« in the sense of a closed form was the record car of the Belgian Camille Jenatzy, which he affectionately called »La jamais contente«, which is never satisfied. This bullet (Jenatzy cracked the 100 km / h mark in 1899) was actually designed like a bullet, but: Jenatzy had cut both the wheels and itself out of the body. In addition, Jenatzy belied all contemporaries with his record who thought that at this rate a person would suffocate at the wheel. And he became the first professional racing driver ever (for the Benz works team). His nickname: Red Devil.

Ships and locomotives were the technology carriers par excellence around 1900 and their shape was considered trendy, progressive. As long as the car was formally and constructively modeled on the carriage, there wasn't much that could have been designed. Only after a "basic layout" had developed, and standardization had occurred, were there options to design the exterior of a car in a rudimentary way: the engine casing, the bulkhead, the fenders and the passenger cell, which until 1920 was more like a train compartment or a boat and often didn't even have doors. The first batch that was designed was the grille. The cross-sectional shape, size, material and, above all, the manufacturer's lettering were the first challenges for vehicle designers. This tradition explains the importance and design of the front section with grill to this day, even if there is no longer any technical need for it.