What is the planet Titan

Let us put ourselves back in the year 1655. 45 years earlier, Galileo Galilei had four Jupiter-
Moons discovered, the very first moons of any other planet. And now
Christiaan Huygens pointed his telescope at Saturn and on March 25th
discovered the first moon of Saturn. Huygens would have with his telescope too
can discover other moons of Saturn, but he believed in those today
strange logic that with six planets (Mercury, Venus, Earth,
Mars, Jupiter and Saturn) and six moons (one earth moon, four
Jupiter moons and a Saturn moon) a "symmetry" is given
and thus no further body should exist and did not seek any
other moons. This first and largest moon of Saturn got later
the name Titan, after the gods of the titans (from
Greek word for "who make an effort", "nerd"), the children
who and some of the grandchildren and great-grandchildren of Tellus and Uranus.
One of the titans was Saturn. As the sixth innermost of the big ones
Saturn moons Titan was given the designation Saturn VI. 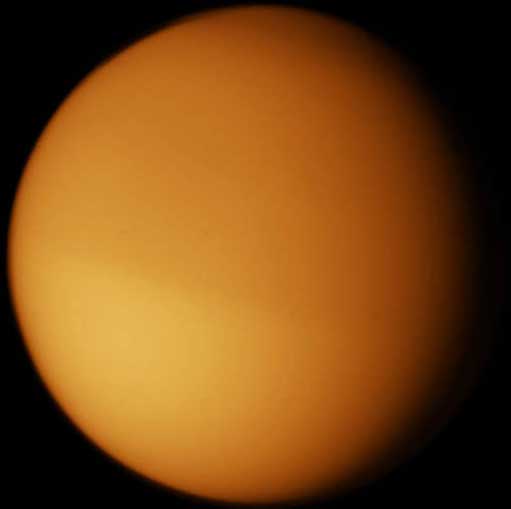 For a long time, Titan was considered the largest moon in the solar system with a diameter of
about 5550 km. But in 1980 the Voyager 1 probe showed that Titan had a dense atmosphere.
owns the sphere that makes it appear so large; its true diameter is "only"
5150 km, so after Ganymed (5262 km diameter) it is after all the second
largest moon in the solar system and by far the largest moon of Saturn (er
makes up about 95% of the total mass of all Saturn's moons). Besides, he is
bigger than the planet Mercury. 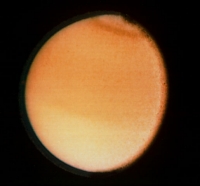 Titanium consists of approximately half each of ice and half of rock. It's probably like this
built up: Inside there is a large core of rock with a diameter of
3400 kilometers. This is made up of several layers of different crystalline
Surrounded by ice shapes. Titan's inside may still be hot.

Photo by Huygens on January 14, 2005.
The largest of the ice chunks recognizable here
have a diameter of approx. 15 cm.


Titanium's surface consists mainly of a mixture of cloudy (water) ice and hydrocarbon ice.
The Huygens probe, which landed gently on Titan on January 14, 2005, took pictures that appeared to be
landscape shaped by erosion with gullies, coastal areas and even pebble-shaped
Show objects on the surface (see pictures). Some pictures show a complex network narrower
rivers washed out by a liquid, from lighter high areas to lower and shallower ones
dark regions are enough. River systems are formed from these channels, leading to dried-out lakes,
in which "islands" and "sandbanks" lie (see illustration), which are noteworthy similarities with those
exhibit on earth. Other pictures show some kind of small round pebbles in a dried out
River beds that appear to be made of dirty ice, but because of the low levels that prevail on Titan
Temperatures are hard as stone. Titan's floor appears to be at least partially made up of deposits from the
Organic haze surrounding Saturn's moon. This dark material from the atmosphere
is concentrated in methane precipitation at the bottom of flow channels and river beds and contributes to the
dark areas visible in the images. There are very few craters on Titan
The surface is very young, on average around 100-300 million years old. 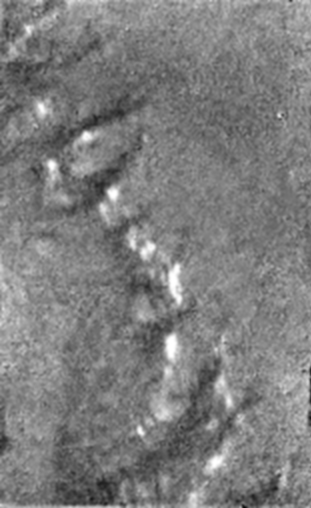 "Islands" in a dark plain 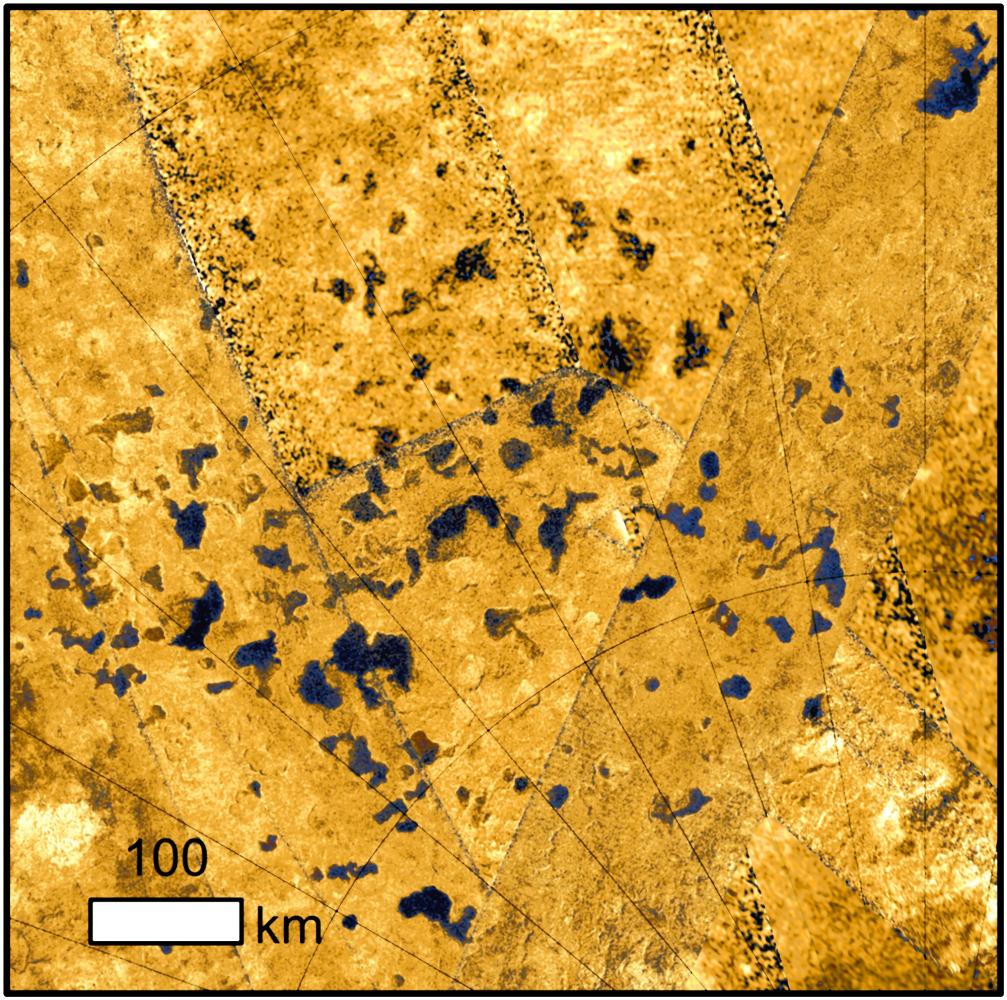 Lakes on Titan. Image from the Cassini spacecraft.


Titan's atmosphere is extremely interesting. Titan is the only moon in the solar system that has a dense one
The atmosphere. Near the ground it is even five times as dense as that of the earth. The denser layers of the titanium
atmosphere have a combined thickness of over 500 kilometers and are therefore much thicker than that of the
Earth's atmosphere, which together are only about 100 kilometers thick. The "air pressure" of the Titan atmosphere
is more than 1500 hPa on the ground (earth: 1013 hPa) and at an altitude of 175 km it is still 1 hPa (at the
Earth this is already the case at an altitude of 50 km). It consists mainly of nitrogen, namely near the ground
90%, in the stratosphere 97% and in the upper layers probably even 98%. The other
an important component is methane, which makes up 5% near the ground and 2% in the stratosphere. In
Methane and nitrogen molecules are exposed to and through UV radiation from the sun at about 300 km altitude
Electrons in Saturn's magnetosphere split up and can then make more complex molecules like
Forms ethane, ethyne, propane or hydrogen cyanide (hydrogen cyanide gas). The result is similar to smog
over big cities, only titanium-wide and much denser. 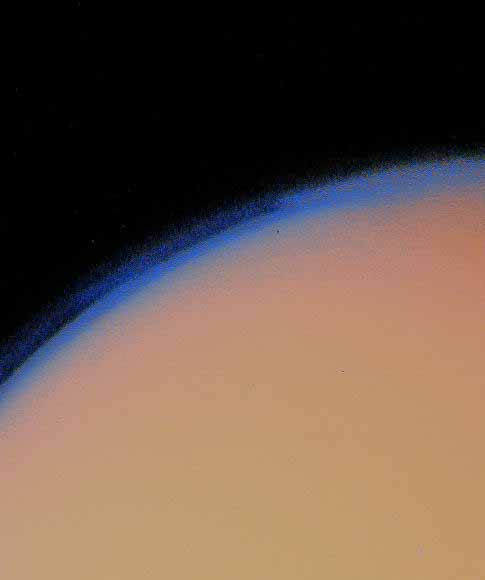 
The titanium atmosphere rotates faster than the titanium body, a phenomenon called super rotation
becomes. This means that there are westerly winds in the atmosphere at a height of 50 km with one
Speed ​​of 140–180 km / h (corresponds to a rotation that is about five times as fast as the rotation
of the titanium body is). The Huygens probe even measured a wind speed at a height of around 120 km
of about 430 km / h. The super rotation is probably also the cause of characteristic
Shapes of certain surface features: many bright spots in a certain area
have sharp western but blurred eastern margins, and some have them
Spots streamlined (see picture).

An important question is why Titan is the only moon in the solar system with one
dense atmosphere is. The others because of their distance from the sun and theirs
The size of the moons still in question are the Galilean moons of Jupiter
Io, Europa, Ganymede and Callisto as well as the Neptune moon Triton. The
Jupiter's moons are probably still too close to the sun, even though they are
are five times as far from it as the earth: their attraction
forces should not be sufficient, atmospheric gases at a temperature of –140 ° C
to hold permanently. Triton, on the other hand, is so far from the sun
removes that its surface has a temperature of –235 ° C
in which the vast majority of the substances are already frozen.

Most likely there is a kind of water cycle on Titan like on Earth, with
Clouds, rain, rivers and lakes, just not from water, but from methane and
Ethane. Methane clouds at a height of around 20 km and liquid or frozen methane
the surface are already safe, a (liquid) lake was recently discovered and
detected liquid ethane in it. Compared to Earth, however, Titan is small, rotates
very slowly, is only weakly lit by the sun and is very dense
and thick atmosphere. Presumably, therefore, many processes do not run like ours,
for example, it is likely to be a region determined by high and low pressure
changeable weather like in Central Europe on Titan do not exist.
Hurricanes are also not expected. 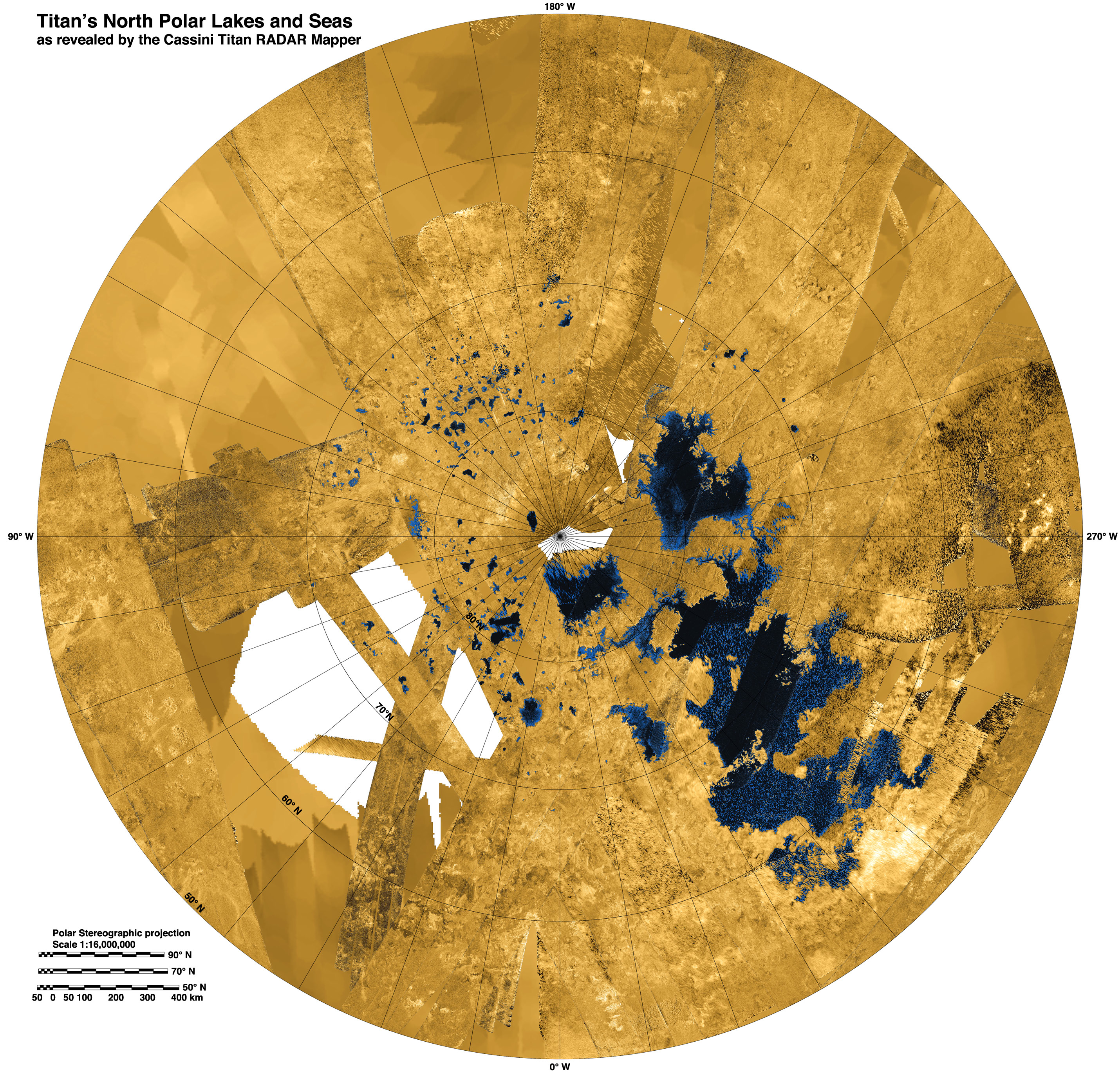 
In addition, the startling discovery of Argon 40 in the atmosphere suggests that
that there have been volcanic eruptions on Titan, but in contrast to
from which not lava but ice and ammonia were expelled on earth.

The conditions on Titan are similar to those on Earth around 3.8 billion years ago,
than the first in the reducing (oxygen-free) primordial atmosphere and primeval soup
Life building blocks, the amino acids, formed. However, the temperatures are up
Titan is around 300 degrees lower than it used to be on Earth. The formation of life
on Saturn's moon is, so to speak, frozen in before it really began. 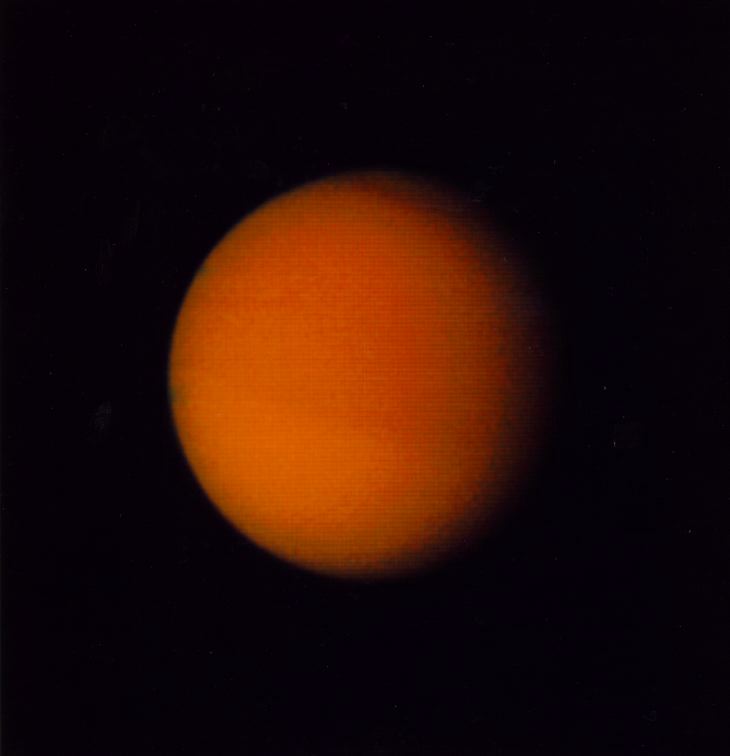 Titan is probably a strange world: The rocks are not made of silicate rock, but of ice, which because of the
prevailing temperatures around –180 ° C is hard as stone; the lakes and the rain (if any)
not from water, but from methane or ethane. The raindrops that come from clouds of methane or
Ethane drops could be huge, up to an inch in diameter. Because gravity is only one
Is seventh of the force of gravity on earth, they fall down rather slowly: they need about
an hour for the way from the clouds to the ground. But in most cases they achieve that
Soil not at all, but evaporate beforehand. But if the rain did hit the surface
reached, then rivers of methane or ethane are likely to form, which flow through the otherwise torrential rivers
Pour dry river beds and create lakes of ethane and methane dissolved in it. 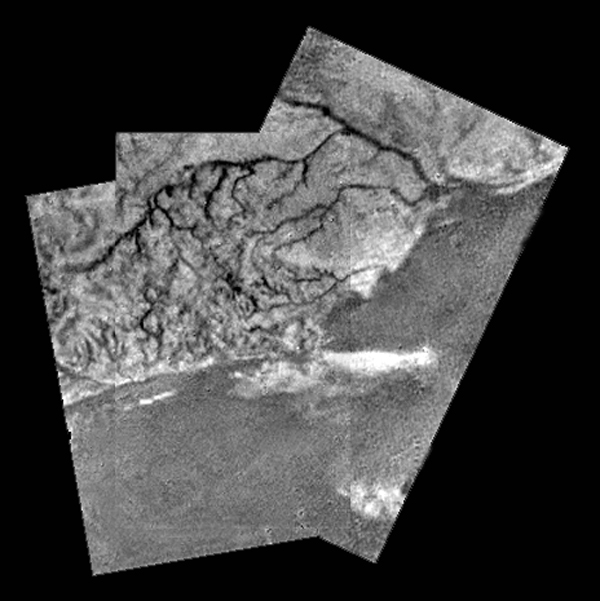 Area with river beds and ridges,
Mosaic from photos taken by Huygens on January 14, 2005 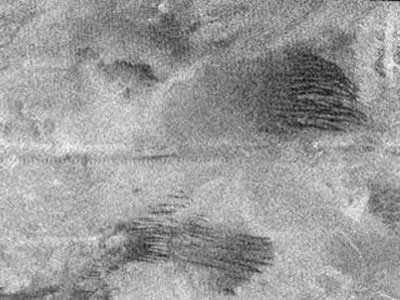 
Navigating such rivers and lakes would also be one for future astronauts
unusual experience: while on earth in motor boats the fuel
(Gasoline) and the oxidizer (oxygen) is extracted from the ambient air.
is assumed, the fuel (ethane and methane) could be directly on titanium
can be drawn from the "body of water" traveled on while the oxidizer
(Oxygen) by mining and electrolysis methods from the upper
surface ice would have to be obtained and carried in gas bottles. 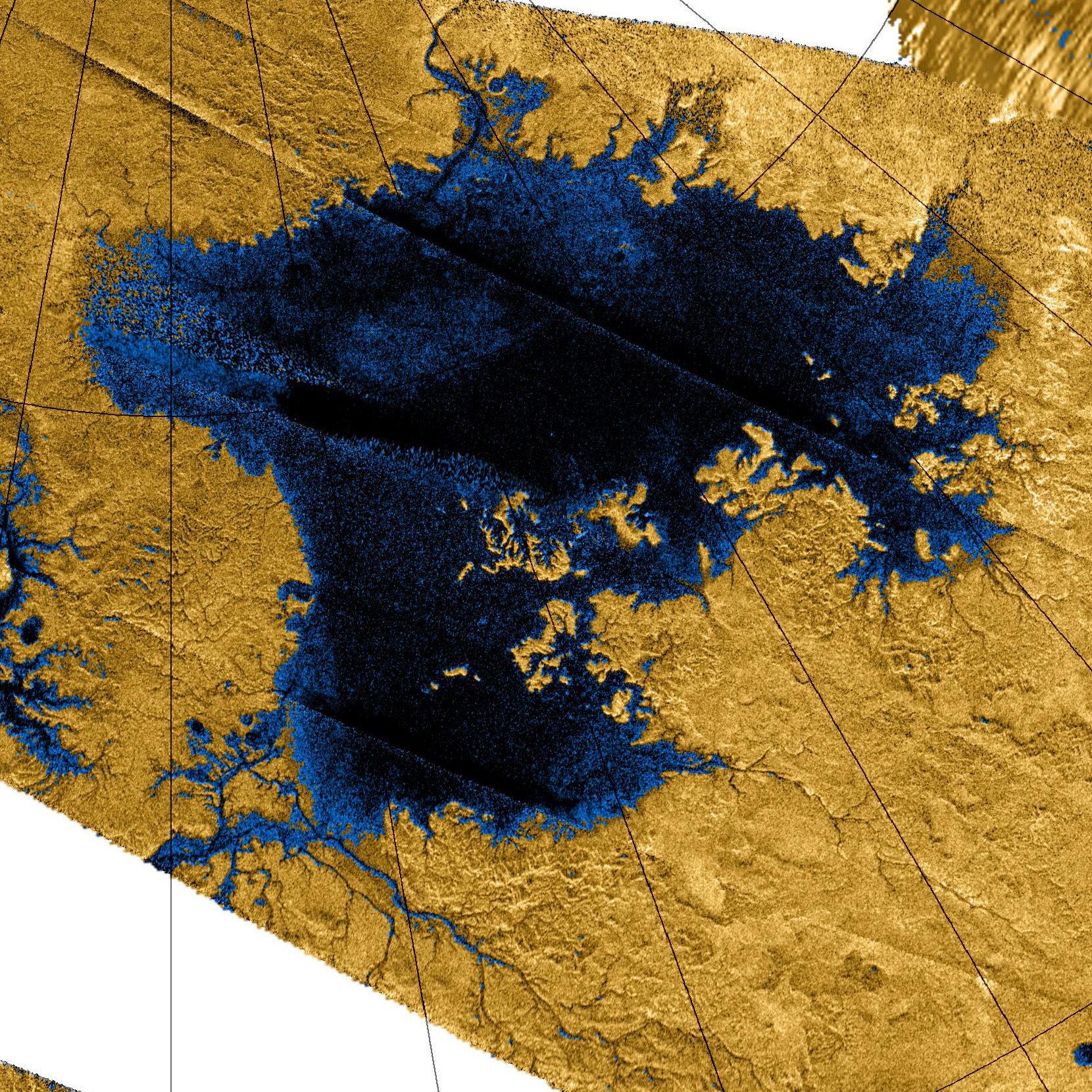 
A laboratory reconstruction of various noises made during the descent
the Huygens probe through Titan's atmosphere is here.