Gun sales in the US: Walmart raises minimum age

After the massacre at the school in Parkland, another company is drawing conclusions. Trump is also determined to change the minimum age. 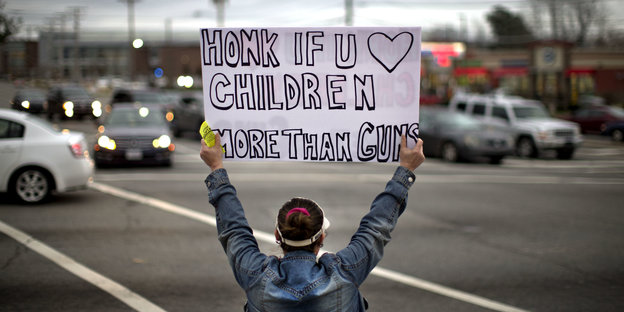 WASHINGTONdpa / afp | US President Donald Trump is determined to tighten gun law after the school massacre in Parkland, which left 17 dead. "We can't wait and play games, we have to do something," said Trump at a non-partisan meeting with Senators and MPs that was televised in its entirety.

Meanwhile, Walmart, another US company, drew conclusions from the fatal shots at the school in Florida two weeks ago: The retail giant raised the minimum age for buying firearms and ammunition to 21 years. The AR-15 assault rifle, which the shooter used in Parkland, has not been in Walmart's range since 2015, the company said.

The retail chain Dick's Sporting Goods had previously announced that it would no longer sell assault rifles. In addition, weapons should generally only be sold to customers aged 21 and over. The Parkland perpetrator had bought a rifle from Dick's - but that was not the weapon he used at the school during the massacre.

In the rampage at Parkland's Marjorie Stoneman Douglas High School, a 19-year-old ex-student shot 14 teenagers and three adults. Since then, a tightening of the gun law has been discussed in the USA.

"In light of recent events, we took the opportunity to review our firearms sales rules," said Walmart on Wednesday. Gun laws in the United States are regulated differently depending on the state. In some states, hunting rifles can already be purchased by 18-year-olds.

"We are determined to turn our grief into action," Trump said during the live-broadcast meeting. "We have to harden our schools." He repeated his suggestion to equip certain teachers with weapons. If possible attackers do not have to fear that "bullets also come from the other direction", nothing will change, said Trump.

In connection with the possible arming of teachers, an incident at a school in the US state of Georgia caused a stir. The police arrested a teacher in Dalton who had barricaded himself armed in an empty classroom. When the principal of Dalton High School tried to unlock the room, witnesses reported at least one shot from the room. Children were never in danger. The man (53) volunteered after 30 to 40 minutes in which he was confronted with the police. Why the man barricaded himself was unclear. He was charged.

The President backed up his proposal to improve background checks on gun buyers. He also doesn't want the mentally ill to have weapons. A bill should not contain the subject of the concealed carrying of weapons, said Trump. "You will never get through that."

Some of the ideas that Republican Trump sympathized with on Wednesday came unsuccessfully from his Democratic predecessor, Barack Obama. “Why hasn't anyone done anything so far?” Asked Trump with a grand gesture. He wanted a big, common law of both parties that everyone should work on. "I want something that is beautiful," said Trump. Better to have a law than 15 or seven.

The President called for the age limit for rifles, such as those often used in raids on schools, to be raised. An AR-15 style assault rifle was also used in Parkland.

Don't be afraid of the gun lobby

You shouldn't be afraid of the gun lobby organization NRA, Trump also said. “You have lost power over me - what should I use it for? - ’but they have power over you. Some of you are rigid with fear. You mustn't be, ”he said to the group in which many Republicans froze. Trump had received donations from the NRA in the amount of 30 million dollars in the 2016 election campaign.

According to the US president, a decree is in progress that will ban rapid fire pistons. "We can do that," said Trump. But it is legally controversial whether he can ban these attachments, which allow a semi-automatic rifle to fire like a machine gun, without Congress.

For students at Marjorie Stoneman Douglas High School in Parkland, Wednesday was the first regular day of class after the attack two weeks ago.