How does technology affect art?

In times when aesthetic standards are being sought for Google's high-tech data glasses “Glass”, designers show that the links between art, technology and fashion are often most promising where the technological aspect serves to implement a conceptual idea.

Shirt 31477980, Kathrin Passig | © Kathrin Passig At the beginning of March 2013, Solid Gold Bomb hit the headlines. The now Massachusetts-based, originally Australian fashion label, which until a few years ago was still producing in Düsseldorf and later in Metzingen, had offered t-shirts for sale on Amazon, which outraged a global public via Twitter and Facebook. The reason was that allegedly a computer application that automatically and randomly picked half of the sayings on the T-shirts from the dictionary had generated sentences that encouraged murder or rape without this having been checked beforehand. 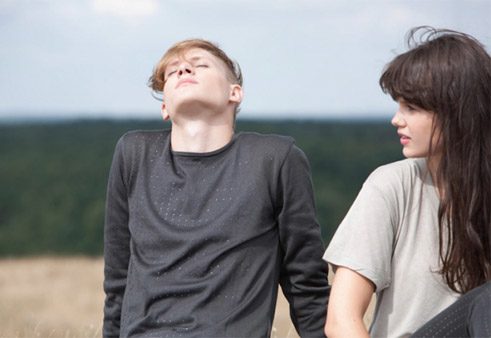 Trikoton Lookbook | Photo: Marie Jakob, 2011 Berlin-based journalist and writer Kathrin Passig, who, in addition to her victory in the renowned German-language literary competition, the Ingeborg Bachmann Prize, also became known as a co-founder of the Berlin creative network Zentrale Intellektiven Agentur, has taken precautions . So that a case like this does not occur with her product random shirt, the texts on the T-shirts she sells come from authors who are friends - and from herself. Random shirt advertises with the slogan “Buy this shirt now! Never come again! ”And is based on a principle according to which motifs are generated for the customer by software from an immense number of short texts, fonts, patterns and images in an online shop of the company Spreadshirt, which are almost unique in their respective combination. Passig assumes a "roughly estimated" 41,121,250,000,000 different motifs. 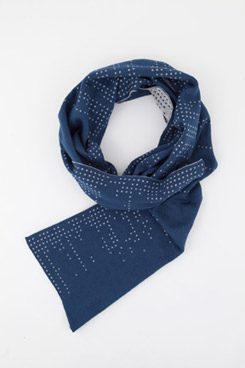 Scarf “The Paul Auster Edition” | Photo: Trevor GoodThe Passig concept stands for a trend in the connection of art, fashion and technology. Technology is not part of the garment, so it does not interact directly with the fabric while the garment is being worn. Rather, it is only used in production and only produces a trace, but then a pattern or motif that is all the more characteristic. The Berlin label Trikoton, for example, has been successful in the field of generative fashion design in recent years through interactive production processes. The label was founded in 2010 by the fashion designer Magdalena Kohler, the product designer Hanna Wiesener and the interaction designer Hannes Vorteilmann. The principle behind Trikoton is that the customer can use their own voice to speak messages or have songs recorded via the label's website, the properties of which are digitized into the knitting pattern of the garments, giving them a personal touch. The label works with local manufacturers and artists. The designers call their work a special “combination of traditional handicrafts and high-tech skills”. 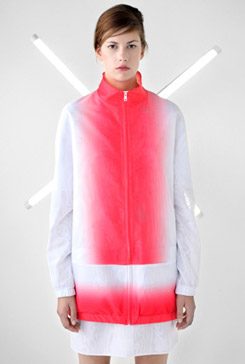 Alba Prat | Photo: Alex Waespi A similar generative principle can be found in the project TK 730 (2011) by four designers working in the Netherlands, including the German artist Anja Hertenberger. Instead of your own voice, it is the input of a text into a typewriter keyboard that generates a knitting pattern. The machine was also redesigned from an aesthetic point of view. As an (art) object designed in this way, it contributes to the sensory perception of the product and project. The young designer Alba Prat, who comes from Barcelona and lives in Berlin, took a more minimalist approach for her “syn chron” collection. Based on a synaesthetic installation work of the same name by the artist Carsten Nicolai, Prat registered her pulse before and after a physical activity and generated patterns and blue or red color gradients from the two frequencies. For implementing this idea, Prat won the audience award at the H&M Design Award 2013. Your collection became one of the most blogged examples of generative fashion design almost overnight. 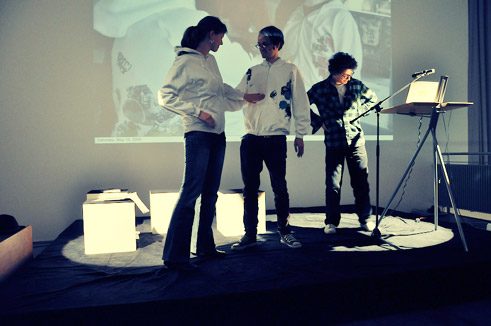 DADAgear | Photo: Ebru Kurbak, © DADAgear, 2008 Textile communication, which can be created playfully between several participants, was the idea of ​​the DADAgear team. With this project, the Hamburg-born media artist Anika Hirt, the designer Onur Sönmez from Izmir, who currently lives in Munich, and the Italian artist Mauro Arrighi implement principles of random generation that stem from the DADA movement of the 20th century.

DADAgear | Photo: Onur Sönmez, © DADAgear, 2008 As a “technology project, happening and electronic-generative poetic tool”, at DADAgear hoodies are staged by their wearers as a means of creating a poetry slam. Equipped with pressure sensors, Bluetooth technology and linked to a database of sounds and spoken words, the literary text that sounds in the room becomes more complex the more people involved touch each other - "Random Shirt 2.0.", So to speak.
<?