Which carbonium ion is the most stable 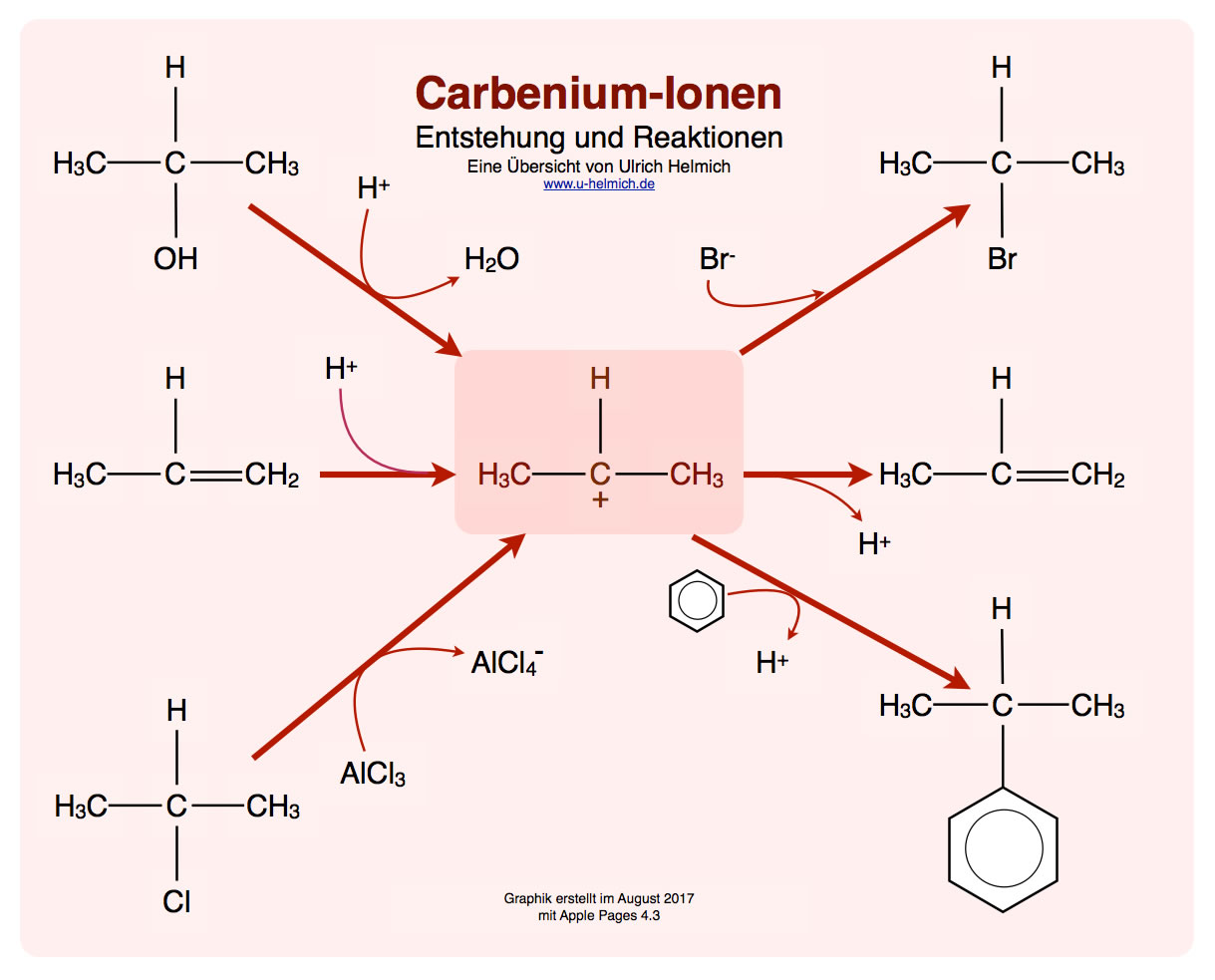 Protonation of an alcohol

Protonation of an alkene

An alkene such as propene can also be converted into a carbenium ion relatively easily if it is protonated. Sulfuric acid is often used for this because the acid residue anion HSO4- is not nucleophilic[2]. In the case of protonation with hydrochloric acid HCl, for example, the acid residue Cl- attach to the carbenium ion, causing it to cease to exist. The hydrogen sulfate ion and the sulfate ion, on the other hand, show no tendency to attach to a carbenium ion.

Reaction of an alkyl halide with a Lewis acid

A carbenium ion can be easily produced from an alkyl halide such as 2-chloropropane, for this one has to remove the halogen atom from the compound as a halide ion. This is done with the help of a Lewis acid. Usually aluminum chloride AlCl is used for this purpose3 used, but also antimony fluoride SbF5, Titanium chloride TiCl4, Tin chloride SnCl4 and boron fluoride BF3 are often used as Lewis acids[1].

Addition of a nucleophile

A carbenium ion can be obtained from a nucleophile such as Br- to be attacked. A halogen-alkane or a similar compound is then formed. This step plays a major role in electrophilic addition, for example, but also in nucleophilic substitution after the SN1 mechanism.

Splitting off a proton

A carbenium ion can also stabilize itself by releasing a proton. Then an alkene is formed. This step occurs, for example, with elimination.

Addition of an aromatic

Depending on your perspective, you can look from the "Addition of an aromatic to a carbenium ion" speak, then one would have to use the mechanism as a nucleophilic substitution according to the SN1 mechanism. Alternatively, you can also use the "Addition of a Carbenium Ion to an Aromatic" speak, then this mechanism would be called Friedel-Crafts alkylation, a special case of electrophilic substitution.

Even more stable than such carbenium ions are carbenium ions, in which the sp2-hybridized positive carbon atom connected to an aromatic ring. Here the pi-electrons of the aromatic can enter the pz-Cross orbital of the positive C-atom and thus reduce the positive charge quite strongly.