Aesthetics and Culture
Learn from literature

If one reads literature not as a representation of reality, but first of all pays attention to its play with language, with its forms and meanings, then one can discover its incredible linguistic and culturally reflective potential. A plea for a changed approach to literature in GFL lessons.

If you look back at the history of foreign language teaching, you can see that the status and role of literature have changed dramatically. Up until the sixties of the last century, the ability to read (high) literary texts was the focus of instruction aimed primarily at acquiring symbolic capital. With the increasing mobility of goods and people and the resulting new communicative requirements, this changed: Now foreign language lessons were geared towards the goal of linguistic ability to act in everyday life and at work; the new learning objective was called communicative competence. A literary analysis, which was bound by rather elitist objectives, seemed to be unable to contribute to their acquisition. Thanks to the aesthetic reception and intercultural literary didactics that emerged in the 1980s, literature remained anchored in communicative foreign language teaching; limited, however, to its role as an occasion for discussions and as a carrier of information about the country. The specific literary The constitution of the literary texts - which draws attention to the text itself, its form, its made-up - was accepted with reservations, if at all. The potential of such a literary approach to text and language for foreign language learning - both linguistic and culturally related - remained untapped.

Reason for conversation or symbolic competence

The current situation is marked by contradicting tendencies. On the one hand, literature in the current DaF textbooks functions as good as only an occasion for discussion; the intercultural perspective on them has disappeared. As problematic as this perspective was (the cultural comparison inherent in it always harbored the risk of solidifying stereotypes instead of breaking them up): Due to their increasing exclusion, the orientations towards language work, in the context of which language is understood primarily as an instrument to which the Preoccupation with literature cannot add anything fundamental, nor reinforce it. They also shape the Common European Framework of Reference (GER) published in 2001; Significantly, this knows with the aesthetic use of languagehardly anything to start with (see his brief chapter 4.3.5 of the same name). 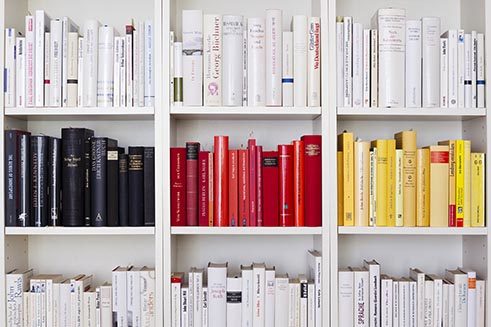 Literature is national only at first glance; but in fact there is "no patriotic art": it belongs "like everything good to the whole world" (Goethe). | Photo: © Thielking - plainpicture On the other hand, a counter-movement has been forming for some time now, which is again giving literature a higher priority in foreign language teaching, not in spite of, but because of its aesthetic dimension. No return to positions before the turn to communicative teaching is required. Rather, its further development under the sign of a language and culture reflective symbolic competence (Claire Kramsch) pleads. This still young concept takes into account the fact that the world and the communicative requirements associated with it have become more confusing and complex; The key words are globalization and the Internet, multiculturalism and multilingualism. At the same time, the concept is part of a changed theoretical landscape, which includes terms such as linguistic and cultural turn, postcolonialism and a non-essentialist concept of culture. Fundamental is the insight into the central role of language in the construction of reality and its order, of belonging and exclusion, of sense and meaning; as well as the realization that people use language instrumentally, but only partially master and control it. It is precisely their literary nature that enables literature to make the processes of meaning formation on which these constructions are based visible and thus to have a culturally reflective effect: by essentializations - for example of "German" as a supposedly homogeneous language - and culturalizations - the identification of positions and perspectives with “cultures” - reveals, suspends supposed fixed meanings, questions supposedly immovable norms, tried out new perspectives, in general: spaces for reflection opened up.

The textbook provides a good example of this studio d A2 Printed text by Elke Erb Movement and standstillwho, through the well-thought-out arrangement of his words and the skilful use of key terms, lets the learner literally experience, feel and see that in our - modern - present, movement can at the same time be standstill and vice versa; and thus shows what language can do when it is used literarily: to express ambivalences, ambiguities and contradictions that cannot be easily resolved; and which cannot be formulated in a non-literary way. Unfortunately, due to its communicative orientation, the textbook does not accept the invitation to linguistic and cultural reflection that Erbs text makes. However, the literature given below contains numerous methodological tips on how learners can be sensitized to this unique ability of literature; and above all, how they can make this ability productive for themselves, for their own ability to speak and express themselves - at all language levels.

The example mentioned is also interesting because it shows that cultural reflection is almost always also language reflection and vice versa. And it also shows that the categorical separation between literature and language is tending to dissolve: Because literature is losing its character as an alleged beyond (normal) language, which - if at all - can and only play a role in foreign language teaching at a higher language level may. Instead, the literary becomes visible as a fundamental dimension of language that should be included in foreign language teaching from the outset because it is a powerful resource for language acquisition.

From literature in class to literary class

If one applies these considerations to the GFL lesson itself, then one arrives from the literature in GFL lessons to a literary GFL lesson; this is characterized by an aesthetic perspective on language. This means that the normative right-wrong opposition no longer applies to them, but the aesthetic success-unsuccessful opposition. Deviations from the rules and conventions must be checked for their functionality - as with literary texts. They can fail, that is, they can be an expression of inability, but they can also be successful, that is, they open up new opportunities for expression and reflection. Maybe it is enough to have the idea of ​​a literary GFL lesson in the back of your mind to pave the way for learners to deal with the German language in a more reflective and ironic, at the same time more relaxed, relaxed and ultimately freer and more creative way.

Dr. Michael Dobstadt represents the professorship for German as a Foreign Language at the TU Dresden. The focus of work and research is on the functions of literary and literary textuality in DaF / DaZ, aesthetic media in DaF / DaZ as well as places of remembrance as 'places of learning' in a culture-science-oriented foreign language didactics.

Dr. Renate Riedner works as a Senior Lecturer for the German Academic Exchange Service at Stellenbosch University in South Africa. Her research interests are foreign language didactics based on literary and cultural studies.

Do you have any questions about this article? Write us!