Why does whiskey taste better with water?

Why whiskey tastes better with water

Before it is bottled, whiskey has an alcohol content of around 60 percent. A study shows why it not only becomes lighter when diluted with water - it also tastes better.

Water and grain - these two basic ingredients are what whiskey is made of. The result is a drink that can taste woody, peaty, fruity or grassy, ​​for example. The spirit develops its individual aroma through production and storage. The grain is germinated, crushed, mashed, fermented and finally burned. The fresh brandy is stored for at least three years to mature, where further flavor notes develop.

That changes the taste once again, as Björn Karlson and Ran Friedman write in their recently published study. Some whiskey connoisseurs even add a little water to the finished drink in the glass, so that the taste can develop even better. As the analysis of the two chemists shows, there is indeed something to this expert advice.

Aroma rises to the top

They investigated this on the basis of an aromatic component that is particularly typical of Scottish whiskey, the plant substance guaiacol. It provides the smoky taste that arises when malted barley is dried over a peat fire. The small molecule has a special chemical property: it is water-loving and water-repellent at the same time, which is called amphipathic in chemistry. 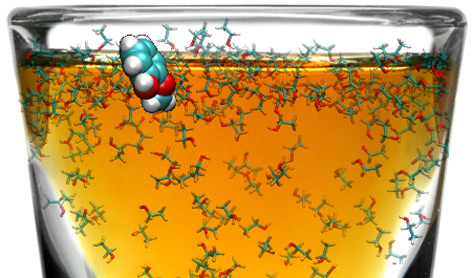 The flavor moves towards the surface

Water and alcohol do not mix completely at the molecular level - and that in turn influences the distribution of the aromas in the drink, as the researchers demonstrate with the help of computer simulations.

Karlson and Friedman fed their program with different proportions of alcohol and water. And they found that the semi-volatile flavoring substance with an alcohol content of 27 to 45 percent is mainly located near the surface of the whiskey - i.e. exactly where the smell and taste are most intensely perceived. If the alcohol content exceeds 59 percent, the molecular flavor carrier drops. In a sense, the aroma disappears in the drink.

Accordingly, it is actually worthwhile to dilute the drink from the bottle to up to 27 percent alcohol. The aroma can escape on the surface. The whiskey tastes and smells even smokier. The researchers write, however, that there is only a fine line between diluting and watering down. Too much water will make the taste go away because the concentration of guaiacol becomes too low. According to the researchers, the same applies to many other flavorings in liqueurs and brandies, e.g. vanillin. This could explain why most of these spirits have an alcohol content between 30 and 50 percent.