What does a red door mean

People who live behind a red door are happier 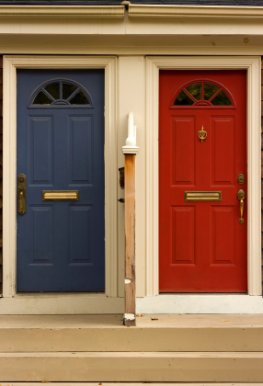 "Whether blond or brown, I love all women", it already says in an old German song and provides information about the fact that the performer shouldn't really care about the hair color. So far, this has probably also been thought about the appearance of house doors, but a current study by the British paint company “Farrow & Ball” shows that you should perhaps take a little more time, especially when choosing the color. If you believe the results of the study, the color of the front door probably also reflects the mood of the owner.

Study with a wink

For the study, 2,000 house residents were asked about various aspects of their life. The results were then compared with the colors of the house doors and it seems that correlations actually emerged. In principle, over half of the respondents were convinced that the color of the front door would say a lot about the respective resident. The study provided unequivocal information about what exactly that is.

What emerged particularly clearly in the study was that people who live behind a red front door are very extroverted and overall happier than people with a front door of a different color. Even the owners of a scarlet front door were mostly happy, while the people with white, green and brown doors were at least happy with their lives. Those who lived behind a black door had no dark secret to hide, no, they were particularly successful in their profession. And if you have social contacts and like to have lots of friends around you, it is best to paint your door purple, at least that was the assignment of the study. People with a pink front door dare to do something and have most friends, although everyone can confirm the former right away, because a pink front door is brave enough in itself. Orange and terracotta were mainly chosen by people who are particularly happy in their relationship and behind green front doors are ultimately people who are particularly trustworthy.

Possible explanations of the choice of color

Of course, the color of the front door doesn't affect the mood or success of the person who lives behind it. However, it would be quite possible that some of the homeowners choose their front doors very carefully, so that the respective color then matches their personal characteristics halfway. A spokesman for the company "Farrow & Ball" points out that the front door is the first thing a visitor is confronted with. He also believes that this very first impression can tell a lot about the home and its owner. People are convinced that a color says a lot about personality and that the front door is the first indicator for the people behind it. The company spokesman even goes a step further and speculates that many Brits, not on purpose, but unconsciously, choose very specific colors that reflect their mood or parts of their personality. It remains to be seen whether all of this should actually be taken so seriously and whether genuinely generally applicable tendencies can be derived from the 2,000 people surveyed. In any case, the study is amusing.

Did you like this article? Then just tell us your opinion.