Why do starfish not have bilateral symmetry

Echinodermata, Echinoderms, with about 6300 species living exclusively in the sea, after the Chordata the largest group of Deuterostomia. They live in the benthos of the shelf seas and account for up to 90% of the biomass there. E. are mostly brightly colored and vary in size from 5 mm to 1.40 m in diameter. Adult E. are characterized by a five-pointed symmetry (pentamerism). Its main axis runs through the mouth on the oral side and the anus on the opposite aboral surface. However, almost half of all sea urchins show a secondary bilateral symmetry ("Irregularia“) (See Fig.). A unique differentiation in the collagenous connective tissue of the E. Via nervous control, the connective tissue can quickly stiffen or extremely slacken by shifting calcium and sodium ions in the connective tissue matrix and on the glycoprotein molecules. So-called are important for this process juxtaligamental cells between collagen fibers and the controlling nerves. This special type of connective tissue enables the maintenance of filter positions of the entire body, the position of retaining organs or holding against water movements. Autotomy and an extremely good regenerative capacity are characteristic of all groups of E. except for the sea urchins. The nervous system, which is divided into three unconnected nerve networks, is simple, there is no brain. Simple eyes, consisting of a few to several hundred pigment cup cells, eye spots and statocysts occur in the sensory organs.

E. have a mesodermal calcareous skeleton made of plates (Ambulacral plates) and has spines as special skeletal elements. The spines are usually mobile and covered by epidermis. With sea urchins and starfish there are also characteristic ones Pedicellariums, small grasping forceps that are thought of as modified spikes and work like tweezers. They serve as defense organs and also to catch prey. The coelom (see fig.) Consists of three interconnected parts that form a complicated vascular system (Hydrocoel, Ambulacral system) form. It consists of one Ring channel around the mouth opening with collecting bladders (Polish bubbles). From this arises an often heavily calcified one Stone channel, which usually has a sieve-like openwork Madreporenplatte (sieve plate), which lies on the body surface, is in contact with the sea water. Five branch off from the ring canal Radial canals (ambulacra) which extend to the epidermis via tubular appendages Ambulacral feet (suction feet) or tentacles, which can be moved by muscles and are used for food intake and locomotion.

The blood vessel system consists of lacunae that run along the intestines and the ambulacral system. Breathing occurs mainly through the skin, there are no excretory organs. E. are separate sexes. The eggs, which are mostly fertilized outside of the body, initially develop into bilaterally symmetrical larvae, which can be derived from the dipleurular larva and only develop the adult pentamerism in the course of a deep metamorphosis.

E. have been proven since the early Cambrian and were much more species-rich than today, especially in the late Paleozoic. About 10,000 fossil species are known. The six recent taxa are the sea lilies and hair stars (Crinoida), the starfish (Asteroida), the brittle stars and Medusa heads (Ophiuroida), the sea cucumbers (Holothuroida) and the sea urchins (Echinoida). Another taxon, the sea daisies (Concentricycloida), was only found off New Zealand in 1986 and may be a starfish. 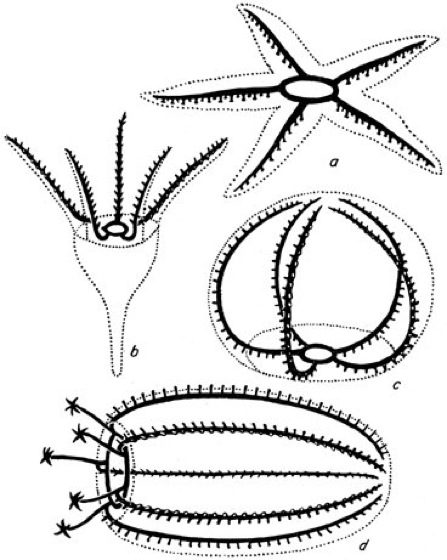 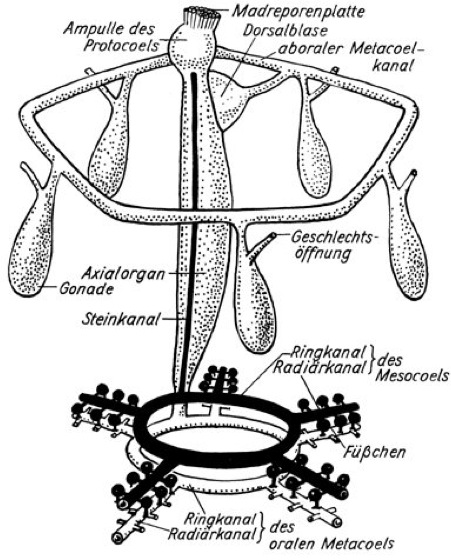 Echinodermata: Scheme of the coelom spaces of the Echinodermata (mesocoel with black feet)