Is chitin a polymer

Worldwide, more than 100 million tons of raw materials, most of which come from fossil, non-renewable sources, are used to manufacture mass products or to generate energy. This waste of natural resources cannot go on indefinitely. Therefore, there have been efforts for a long time to increasingly switch to renewable raw materials. Great hopes are being placed in plant polysaccharides - long-chain molecules made up of linked sugar units - and oils.

Chitin, which is widespread in nature, especially in the shells and shells of insects and crustaceans, as well as in mushrooms, as a building material and its global resources are around 106until 107Tons are estimated, is the second most common polysaccharide after cellulose, to which it is structurally similar as a polymer of N-acetylglucosamine (picture on page 21). By splitting off the acetyl groups with alkaline solutions (alkaline hydrolysis), chitosan is obtained, which also occurs naturally in some mushrooms; With its free amino groups, to which positively charged hydrogen ions easily attach, this polysaccharide can act as a polycation, whose distributed positive charges mediate a variety of useful interactions with other substances.

Possible applications of both polymers have been discussed for a long time. The growing interest is expressed, among other things, in the International Chitin Congresses, which take place every three years. In March 1992 the "European Chitin Society" was founded in France. The current state of scientific research as well as known and newer applications were recently summarized in an extensive study on the initiative of Prof. Berndt Heydemann, Minister for Nature, Environment and Regional Development of Schleswig-Holstein.

What makes chitin and chitosan so remarkable? One important reason is their interesting material properties: The two polymers form crystalline microfibrils and can be processed into fibers, films, membranes and colloids. In addition, as a so-called chelating agent, like a tapeworm with many suction cups, chitosan is able to attach itself to several ions at the same time, in particular to form insoluble complexes with heavy metals. Furthermore, the free amino groups open up possibilities for reacting to very different materials, the chemical and mechanical properties of which can be controlled within wide limits. Chitin can also be used to produce numerous derivatives by attaching hydrocarbon or acid residues to the free hydroxyl groups.

In terms of the number of patents and patent applications, Japan ranks first with 781 registrations between 1967 and 1991. With 61 patents in the same period, Germany ranks third behind the USA. A rough overview of the products already on the market in Japan illustrates the broad application potential, especially in the fields of medicine, pharmacy and cosmetics, but also in food technology, agriculture, biotechnology, technology and chemistry (see table).

The polymers are biocompatible and degradable by the enzyme lysozyme formed in the human body. Chitin is completely non-toxic, while the acute toxicity of chitosan has an LD50-Dose of 16 grams per kilogram of body weight (at this dose half of the test animals die) can be classified as very low. Chitosan works against bacteria and fungi (fungistatic) and serves as the basis for wound dressings, surgical sutures and artificial skin. As a polycation, it is also a candidate for a new generation of lipid-lowering nuclei for the treatment of hypercholesterolemia (the abnormally high blood fat level). Chitosan derivatives with sulfate groups delay blood clotting. Finally, short-chain oligosaccharides made from chitin and chitosan act as immune stimulants with anti-tumor properties.

The biodegradability of the two polymers opens up further application possibilities in medicine, pharmacy and cosmetics. Research is being carried out into the extent to which they are suitable for the controlled release of other drugs. In ophthalmology, chitosan can be used as a material for non-permanent contact lenses, for example after cataract operations. In dentistry, too, chitosan membranes are being discussed for wound closures after surgical interventions or in the treatment of periodontal damage to the dental bed. Chitosan derivatives have already found a permanent place in hair cosmetics as hair setting agents.

In food technology, chitosan is used for the fining of fruit juices and for the treatment of drinking water, as it acts as a polycation to clump and flocculate protein substances that cause turbidity and to precipitate heavy metals as a chelating agent. Because of its antibacterial properties, it can also be used as a preservative and - in the form of foils and films - as a biodegradable packaging material.

In agriculture, feeding whey protein with the two polysaccharides as additives can ensure a more balanced diet for the animals. In some countries an approval process for chitosan as a preservative for seeds and fruits is already running. When introduced into the soil, it reduces the rate of infection by harmful viruses and nematodes (roundworms) in plants. Here, too, there are considerations to use the substance for the controlled release of other substances - in this case pesticides - into the soil.

In biotechnology, chitosan is used to immobilize enzymes and cells. The gels that can be produced from it or chitin also serve as carrier materials for the chromatographic purification of proteins produced by biotechnology.

Technical applications are based on the favorable material properties of the two polymers, which can be processed into membranes, fibers and films. They can also be combined with - partly chemically modified - cellulose to form composite materials. In materials research, biological structures containing chitin such as mussel shells, sclerotized insect shells and elastic membranes serve as models for so-called biomimetics; however, this area is very complex and research is just beginning.

In environmental technology, chitosan is already being used on a large scale in Japan for the treatment of protein-containing wastewater from companies that process fruit, meat, fish or milk, as well as from breweries. As with fruit juices, it lets the proteins flocculate here. In addition, it precipitates heavy metal ions from the wastewater of various branches of industry and softens water.

In chemistry, chitin is a valuable starting material for the synthesis of active ingredients based on glucosamine; A great advantage of this is that, in the case of stereo-isomeric compounds, only one of the two possible mirror-image forms is produced. An American patent describes the use of chitosan as a carrier for catalysts of hydrogenation reactions, which are used, for example, to harden fats in the production of margarine. In addition, chitin and chitosan are of course also suitable in chemistry as stationary phases for chromatographic material separations.

Chitin and chitosan are obtained primarily in Japan and the USA from waste from the shrimp fishery. The annual production worldwide is more than 2000 tons. In terms of consumption, Japan again leads the way with 1,270 tons per year; around 500 tons are used for wastewater treatment and around 100 tons for the production of hair care products and other cosmetics.

In Germany there is currently no noteworthy production of chitin or chitosan, although here too 200 to 400 tonnes could be obtained annually from crab fishery waste. However, most of the crab shells are processed into animal feed. Local suppliers and consumers of chitin or chitosan obtain the raw materials mainly from Japan or the USA.

Compared to the production of cellulose (around 200 million tons worldwide) that of chitin appears to be negligible. That is why it is often denied any significance as a renewable raw material. This situation could of course change in the foreseeable future, especially since chitosan with the help of certain mushrooms is now also available in large quantities biotechnologically.

Chitin and chitosan will certainly not be able to replace cellulose and synthetic polymers. In individual cases such as the fining of fruit juices and wastewater treatment, however, chitosan should be economically competitive with conventional flocculants. It is also an alternative for the synthesis of special polymers, the material properties of which can only be achieved with conventional methods with comparatively great effort. In order to generate a polycation from cellulose, a chemical derivative must first be produced. 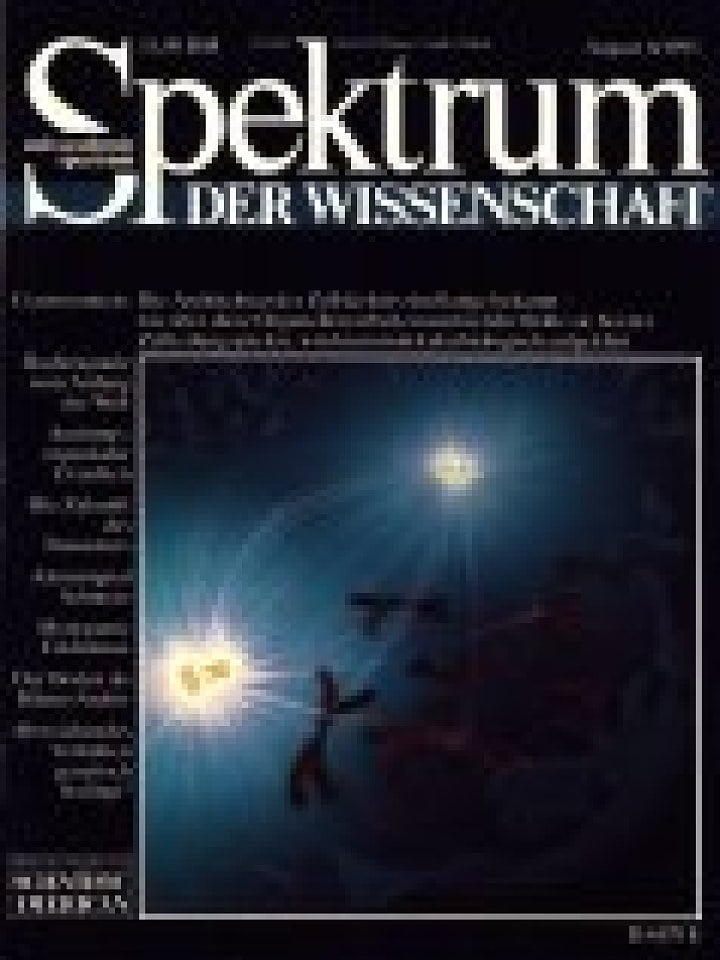 This article is contained in Spectrum of Science 8/1993