Why does Git dominate revision control

I firmly believe that a pound of beef makes a good broth.

Version control is an important tool for programmers. For open source projects, version control with Git and Github as external source code storage dominates today. Getting started on Windows systems is easier with GitExtensions. Once you understand the principle, it's easy to remember. This is to be shown here. Terms such as repository, clone, commit and merge are explained.

Git for Windows forms the basis. The version control can thus be used both via the console and by right-clicking in Explorer (Git-Bash).

You can quickly find your way around the graphical interface of GitExtensions once you have understood the concept. Instead of "click here" or "click there" I will therefore present the commands in the command line version. This is also easy to learn. I assume that programmers know how to open a console and use it to navigate directories. After 30 years of Windows, this is no longer a matter of course. If you can't cope with it, you can use the attached pictures as a guide, which appear when you right-click in the Explorer.

For the resulting example project, three directories are sufficient, which may be on different computers and which are assigned to three contributors. Let's call them Anton, Bernd and Charlie. First of all, every Git user has to set a few things that are important later: (Charlie already has a Github account and does not want to see his own email address published there.)

Create and version a project

Charlie's real name is Charlotte, but her friends call Ingrid (incomprehensible to non-Saxons). Charlie is planning a project for a cookbook with Saxon dishes. She creates a new folder for the project:

As an experienced programmer, she immediately sets up version control:

This creates a repository in the hidden subdirectory of the cookbook folder. The filing system saves all the versions of the project that are created.

Console programs unsettle some beginners because they do not provide any chatty feedback "Repository created". The programs only complain when an error has occurred. No news are good news. It is okay not to see the storage folder on the graphical user interface: Access for unauthorized persons is prohibited. If you should see it, don't mess with it! Otherwise there is a risk of ruining the repository. On the console, Charlie can make sure that it has been created:

But she is deliberately not interested in the content. Charlie can now create, change, add files and apply the changes to the repository. She puts a file

with the name and places the file with

under version control. With

in the filing system (commit). An editor opens. A brief description of the changes must be included in this:

At least this should be done. Charlie made the file a minimal HTML file

which caches the current work status, called "staging" in Git, and

the first two versions are in the repository, which can be accessed with commands such as

can convince. Each version is given a fairly long number (hash value):

The graphical tool GitExtensions even provides this information with a click of the mouse:

Version control is that easy. But what is it good for?

For Charlie, version control is a time machine with which it can jump to all previous statuses in the history of the project. Jumps to future versions such as "Project Completion" are unfortunately not possible. (Why not?)

Charlie needs to test an earlier version of their project again. To do this, it sets the working copies, specifying the hash value

to an earlier state. No juggling with data carriers, nonexistent backups or the like. She can do her test immediately and

brings the working directory up to date again.

If Charlie has made changes to the working copies that have failed or deleted files since the last commit, she can use these changes with

Basically, the work under version control always runs in these steps:

If you only want to use version control as a single-user system, you can stop reading here. There is nothing more to explain.

Charlie has a very crazy idea about her project that she wants to try out. She suspects that this experiment will take a little longer and will probably also require several versioning steps. But she doesn't want to affect the current project if her experiment fails. To do this, it creates a copy (a clone) of the current project repository:

The version control creates the specified directory for this. The clone can now be modified independently of the main branch. This "code fork" gives rise to various branches of development. If Charlie's idea is not feasible, she can safely delete the experimental directory.

Why not just copy the directory, you can? The problem is not with copying, but with merging different lines of development. Without version control, it becomes a nightmare.

Charlie makes the project available to her employees, mostly via a repository server on the web, we assume via Github, for example. She creates a new repository on Github and follows the instructions given there for an existing project:

Anton creates a copy of the project

Anton wants to return his changes to Charlie's repository. Before doing so, it asks for changes in the higher-level repository:

Because the Github repository is unchanged, Anton can immediately follow his changes

Both development branches are merged in the working directory. Since only new files () are added, there are no conflicts. The merging of both revisions can now be done by Bernd

Send to the higher-level repository. Anton takes over this version

(that's in a) turn to its local repository. Anton now also has the current status in his working directory.

Anton and Bernd now both change the index file of the cookbook:

but in different ways:

Both adopt the changes in their local repository (commit). Anton puts his change in the central repository first:

Bernd finds the changes and transfers them to his repository:

Because the same file was edited, there is a version conflict: 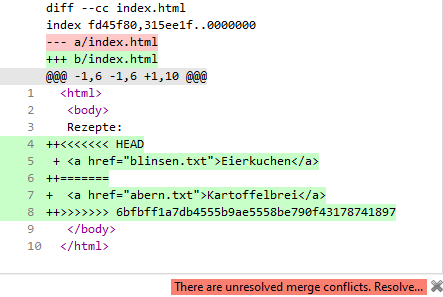 The version control system can automatically merge changes in different sections of the text file in the working directory without any action. Since both authors have inserted the same line, but with different content, the conflict can only be resolved manually in the editor (click on the red field at the bottom right: Resolve ...). A comparison tool like kdiff3, which (after installation and configuration) can be called up via the graphical interface of GitExtensions, makes this easier. 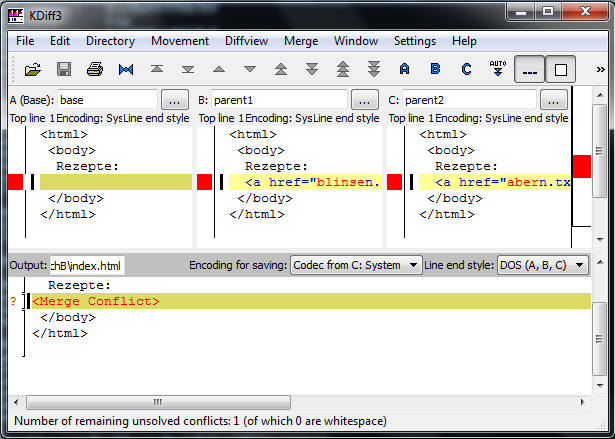 Bernd has to decide whether

is taken over. After saving and exiting, the conflict is considered resolved. It may still have to be deleted. The merged version is stored by Bernd and transferred from the local to the higher-level repository:

Anton takes the changes back into his directory. When Charlie comes back from the field, updates her working directory and looks at her repository.

She notices that Anton and Bernd added two recipes, and, and to the table of contents during their absence:

Teamwork is fun this way!

Write rights are not required for public repositories. Each user can clone other people's projects, add "pull requests" from others to their local repository and then publish the merge again under their own account. This "pull-only" version control is practiced by large open source projects.

The process described here is based on the following software:

No source code is lost again ...