Information about the state of Telangana

"We welcome Telangana as our 29th state. Telangana will give us additional strength for our national development in the coming years," tweeted India's new Prime Minister Narendra Modi on Monday (June 2nd, 2014).

Previously, at midnight, the new state had been celebrated exuberantly by most of its 35 million residents. Fireworks lit the night sky over Hyderabad. The sixth largest city in India will act as the joint capital of the now smaller state of Andhra Pradesh and the new state of Telangana for the next ten years. 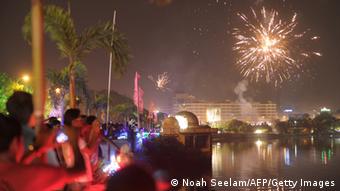 Kalvakuntla Chandrashekar Rao was appointed head of government on Monday (Chief Minister) of the new federal state sworn in. Rao had once resorted to the hunger strike to force the cause for a state of its own. Its founding, now completed, was preceded by decades of political battles. Even at the decisive vote in February of this year - with both the Congress Party and the right-wing conservative Bharatiya Janata Party (BJP) supporting the re-establishment - pepper spray and fistfights were used in Parliament in New Delhi.

Fight for water and jobs

Andhra Pradesh, with a last 84 million inhabitants, was founded in 1956 through the merger of the now separate regions Telangana and Seemandhra. This created a linguistically uniform federal state - Telugu is spoken by almost all residents. Andhra Pradesh became a model for the further reorganization of the Indian Union based on linguistic criteria.

However, from the outset, the merger met with resistance from the residents of Telangana, who felt they were being disadvantaged by the government of the new state. The young people in the drought region of Telangana in particular saw themselves cheated out of career prospects, says the political scientist P. Muthaiah from Osmania University in Hyderabad. "They had the feeling that they did not get their due share in the distribution of jobs in the public service or in the water resources," Muthaiah told Deutsche Welle. 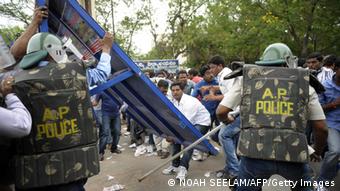 Protests and riots preceded the establishment of Telangana

A study by the Indian government confirmed the widespread attitude of the population in Telangana that they would not get enough civil service jobs due to internal migration from the coastal regions of Andra Pradesh to the interior. Just founding your own federal state could stop this disadvantage, so the popular argument of the pro-Telangana activists.

After years of protest campaigns, including hunger strikes and suicides, the central government in New Delhi decided in 2009 to grant Telangana state status. However, in view of massive protests from Seemandrah, the other part of Andra Pradesh, she withdrew this decision soon afterwards. Here, too, the fear of disadvantages in the supply of jobs and water was the reason for the protests.

The financial and economic engine of Hyderabad

And last but not least, the residents of Seemandrah feared the loss of the Indian information and biotechnology center in Hyderabad, which is an essential part of Andrah Pradesh's economic and tax performance. Hyderabad is in the Telangana region, but is now set to act as the joint capital for ten years. In the long term, the new, smaller Andhra Pradesh should develop its own political and economic center. And in order to allay Seemandrah's worries about the partition of Andrah Pradesh, the then Prime Minister Manmohan Singh had also promised the state financial aid from the central government and tax breaks. 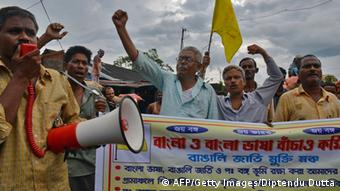 Analogous to the Telangana case, there are various efforts in the Indian Union to reorganize the state structure according to ethnic, linguistic and economic aspects. For example, the demand for a federal state "Vidarba", which is to be separated from western Maharashtra - or for "Gorkhaland", for which West Bengal would have to be divided into East India.

South Asia expert Milan Vaishnav from the US institute Carnegie Endowment for International Peace warns DW against hasty measures in reforms of the Indian state structure. In doing so, ostensible political interests should not be decisive. Rather, one needs a "rational, well thought-out roadmap" for a reassessment of the meaning and legitimacy of India's internal borders.