How is a robot controlled

A Robot control is used in industrial robots and provides the necessary computing power so that the robot arms can move. Depending on the application, the robot controller is responsible for the following types of movement: Point-to-point control (PTP), the Four point control and the Path control (CP). Also use robot controls meaningful Movements of the tool center point (TCP) around and guarantee the reproducibility of the movement sequences, while it monitors their mechanical and electrical performance limits.

Nowadays, robot controls can be combined with other tools and thus create a complex programming environment. External sensors such as cameras and measuring systems are integrated with the help of which the robot can adapt to external influences. For example, it recognizes through these sensors Work pieces which he grabs to a packaged item empty or to fill. It is also possible to incorporate a program-controlled quick tool change system that is equipped with a media coupling (e.g. Hydraulics) Electrical signal plugs or electrical power plugs can be equipped.

Neural Networks can also optimize the robot controller. Due to jerky movements and high centrifugal forces, the joints of the robot axes quickly suffer from material wear. The wear and tear in turn leads to changed properties of the robot arms. The neural network recognizes the changing parameters in the computer program and corrects them in order to ensure a gentle flow of movements and counteract material wear.

Robot controls are often designed as independent control cabinets which, with the appropriate IP protection class, can be placed in a coarser system environment without any problems. Some of them are also designed as slide-in devices (mostly 19 "dimensions), which allow them to be installed in a control cabinet of the automation system.

Types of movement and areas of application

Robot controls can generate the following types of movement of the robot arms:

This type of movement is called in English Point to point and therefore can also be with PTP abbreviate. A start and an end position of the axes describe the movement. The robot controller does not specify the trajectory in between. As a result, the axes only need to reach their target position. The movements of the individual axes of the industrial robot are coordinated with one another: They all start at the same time and arrive at the target position at the same time, which is why the type of movement is also called synchronous PTP control. This means that the slowest axis of the robot determines the total time.

The PTP control is useful when predefined points are to be approached, but the trajectory covered is of no importance. The type of movement is sufficient for applications such as spot welding or palletizing with the palletizing robot.

The path control for industrial robots is in English Continuous Path and is commonly used with CP abbreviated. In contrast to the PTP control, contouring controls are used when the course of the path is important in machining or assembly processes. The course of the path usually refers to the tool center point (TCP). To make this clearer, here is an example: When applying a dispensable compound, the center of the tool is the dispensing needle. The path control must move the dispensing needle at a constant speed in order to apply the compound evenly. In order to recognize the position and orientation of the TCP, the programmer needs several Coordinate systems.

With this type of movement, the robot axes are dependent on one another in a defined temporal and spatial relationship. The path control therefore places higher demands on the computing power than the PTP control. Nonetheless, the path control can also execute the PTP movement type.

In order to program the trajectory precisely, the path control must break it down into several Cartesian path support points. In addition, the movement paths are defined by various path forms such as circular, linear or polynomial paths, the Cartesian speed and the acceleration. In the Linear path start and end point are on the same plane. A normal vector that is perpendicular to the plane spanned by the circle enables one Circular path. The Circular arc is again described by three support points, whereby the starting point must not have the same position as the end point. 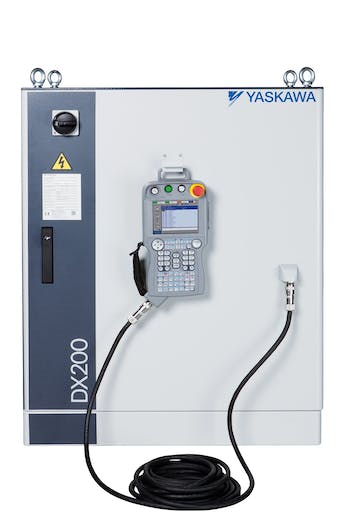 The movement paths of the four-point control can neither be described by a small number of path support points nor by geometric partial paths. In the type of controller, an operator programs the movement of the robot arm. The exact positions of the axes are scanned and saved during programming in a time-defined grid. Since the temporal and geometrical distance between the path support points is very small, the movement between them is insignificant.

In order to program a robot controller, the online programming or offline programming method can be used. The robot control is then so complex that it can even integrate other tools. In this way, the above-mentioned external sensors, for example in the form of a camera, can be integrated.

DIY - The control of a robot vehicle via the smartphone 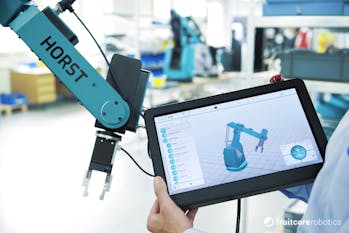 The industrial robot HORST from fruitcore robotics is operated, for example, with the robot software horstFX, which represents a graphical user interface. With the help of a digital twin, various complex applications are programmed without specialist knowledge. Graphically programmed processes can also be converted into classic program codes if necessary.

This type of programming takes place with or directly on the robot. The procedures include, among others:

The robot itself is not required for offline programming. It takes place in advance on a robot-independent computer. In this way, the industrial robot can continue to run while programming, which is why there is no standstill.

This type of programming includes the following procedures, among others:

The basis is basically the principle of a second, independent and redundant axis computer. In simple terms, the position data of the axes are received, monitored and compared with each other in parallel by two independent units. As soon as a deviation is detected, the robot stops with an emergency stop (servomotors are de-energized and holding brakes are applied). This cannot be compared with the two-channel design of the common "emergency stop" or "protective door" safety signals, which has been standard for several decades.

With this device, the Performance Level (PL) d defined in the relevant standards is achieved.

The function can be used to safely monitor the following movements or routes and rooms:

This allows, for example, work areas to be safely protected and movement speeds restricted and monitored in a manner that is safe for people.

Thus, for example, an unused part of a robot's work area can be left out, used for other purposes and the work area used can be cordoned off with simple access protection, regardless of how big, powerful and fast a robot is.

Another example is human-robot interactions. Robots and humans alternately carry out consecutive work at different locations.

Critical processes, which would pose a risk if the movement was too fast, can be safely automated by safely reducing and monitoring the speed.

KUKA
KUKA offers control technologies for robots and production systems. Thanks to the modular structure of the hardware and the open software architecture based on a PC, the robot controller can be adapted to specific requirements and tasks. In the control system KR C4, for example, the robot, sequence, motion and process control as well as the safety control are integrated. The combination of the various controls reduces the 50 percent Connectors and cables in the robot. In addition, KUKA is developing application packages called ready2_use, small robots with integrated energy supply Compressed air, the pre-assembled robot cell flexibleCUBE for laser welding and the single-axis drive unit KP1-MDC.

Stäubli
The Swiss company Stäubli offers a wide range of robot arms, robot controls and robot software under the main theme Robotics at. Stäubli includes its CS8 and CS9 models among the robot controls. In addition, Stäubli develops High pressure-Hydraulics, which include high pressure cylinders and high pressure hydraulic circuits. Via Schäublis PLCInterface, robot programming is no longer so time-consuming and complicated. Stäubli also produces coupling solutions for temperature control and Thermal management and Multi-couplings for media and energy cycles like that CombiTAC System.

YASKAWA
YASKAWA Europe is a developer and manufacturer of mechatronic and robot solutions. They include under robot technology MOTOMAN Robots, robot controls and software for the assembly, welding and cutting tasks of Work pieces as well as for palletizing, packaging and painting. The robot controls for the European market are manufactured in Europe.

FIG
The technology company is active in the fields of robotics and drives, industrial automation and power grids and in infrastructure and Railway sector and offers, among other things, IRC5 robot control and Solar modules at. IRC5 enables quick integration of additional hardware.

The TU Chemnitz is currently doing research in the field of Robot-human interaction active for robot control with multimodal sensors. The professorship is developing a new type of sensor that brings new methods of controlling and regulating robots and greater safety with it. Their multimodal sensors are located on the surface of the robot in a skin-like manner and recognize different materials and distances. The sensors guarantee the robot an independent, collision-free path and the ability to avoid dynamic obstacles.